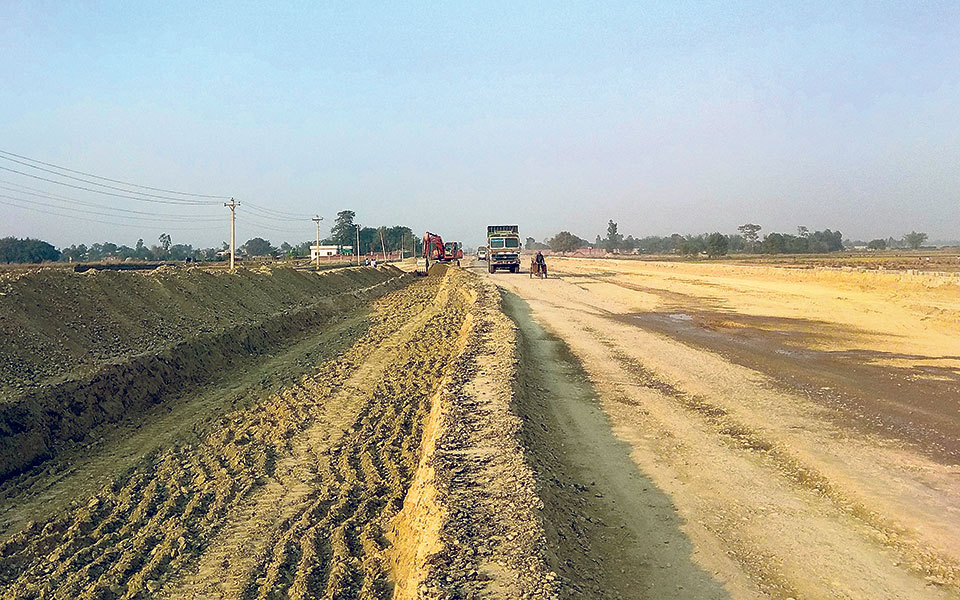 BIRGUNJ, Nov 30: The deadline for completing six-lane road for the country’s major trade route, Birgunj-Pathlaiya, has been postponed because of several reasons.

“Land acquisition is already a problem for the project. Moreover, drinking water pipeline has been a reason for obstruction at the construction site. Besides, we still have to remove trees of Parsa Wild Life Reserve,” said Saumya Anand, engineer of the project. “Such problems are yet to be solved. Therefore, we have to postpone the completion date for the project.”

Six different contractors have received contracts for construction of the 27-kilometer road. The construction was started in July last year after signing a Memorandum of Understanding (MoU).
Personal lands are needed to be acquired for three sections of the road. It has become a challenge to acquire four meters of land in Simara Bazar and 1,300 meters of land in Jitpur. Similarly, acquisition of 700 meters of land from Sirsiya Chowk to Integrated Check Post (ICP) has also not been possible yet.

Anand said that they were taking help of local bodies for land acquisition.

The budget for land acquisition has already been approved. Earlier, the work was delayed due to local level elections and now they are busy supporting their party’s candidates for provincial and parliamentary elections.

Hari Narayan Rauniyar is a candidate for parliamentary member from Federal Socialist Forum Nepal, who is an owner of Pappu Constructions that has received contract for two road sections among the six sections.

Before this, the work was delayed due to lack of budget. The project of 24 months required Rs 1.75 billion in ration of time period. In Fiscal Year 2015/16 Rs 300 million was allocated for construction but lack of budget during the construction delayed the work.

According to the project plan, the six-lane road will connect Pathlaiya of Purba-Paschim Highway to Parwanipur of Tribhuvan Rajpath.

According to the road design, there will be two sides of the road with three lanes each. The six-lane road will be 50-meter wide. The project office said that 25.66 percent of physical work has been completed till now.

KATHMANDU, Jan 23: Only around 20 percent of work of fruits and flowers 'mega market' being built in Chobhar has completed... Read More...

KATHMANDU, Sept 20: The National Reconstruction Authority (NRA) has failed to meet its own deadline for distributing the first tranche of... Read More...