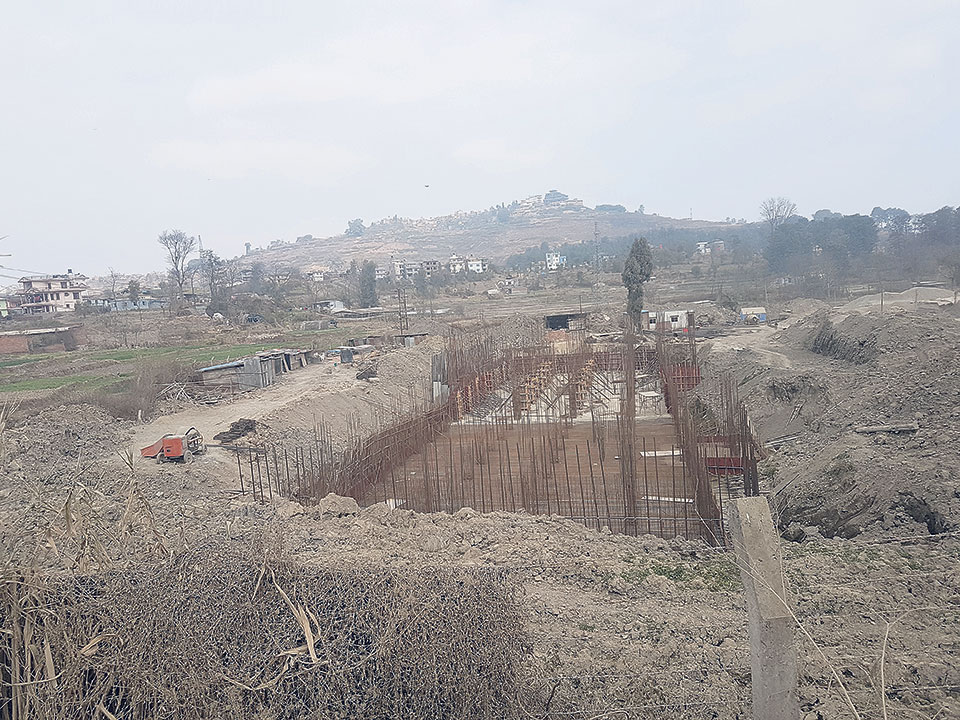 Only 20 percent of work completed so far

KATHMANDU, Jan 23: Only around 20 percent of work of fruits and flowers 'mega market' being built in Chobhar has completed so far even though project completion deadline expired in December 2017.

Government officials point out a number of reasons for the delay, including confusion over the project site which happened to be on the right of way of the proposed outer ring road project.

The estimated cost of the project is Rs 320 million.

The project was awarded to a joint venture of Mahadev Khimti Nirman Sewa, Samsu Zaman, and ANK Construction in 2014, setting construction deadline of December 2017.
“Despite the end of the contract period, only about a fifth of the work has been completed. This is mainly due to delay caused by technical issues,” said Dr Govinda Prasad Sharma, Project Director of Project for Agricultural Commercialization and Trade (PACT) -- a World Bank-funded project -- told Republica.

The market, once complete will be handed over to the Kalimati Fruits and Vegetables Market Development Board. The megamarket will feature multiple multi-storied buildings with separate sections for fruit and flowers wholesale market and a separate administrative building with a conference hall. Similarly, it will also have space for retail stalls.

“Firstly, the entire project was uncertain as the right of way of Outer Ring Road Project, which is being developed by the Kathmandu Valley Development Authority, went through the project construction site.”

Sharma said construction work halted between December, 2016 and April, 2017 when the government decided to divert the path of the Outer Ring Road.
The decision to open mega market in Chobhar taken in 2013 has elated residents of Kirtipur and surrounding areas. But they were dismayed when they found that the project has not properly addressed a major issue of waste management.

Chirikaji Maharjan, local of Chobhar said: “The issue of waste management has not yet been addressed. Though it has been more than a year since the construction work started, even the flooring for the ground floor has not been completed,” Maharjan said, explaining the sluggish work progress in the project site.

Although the construction work caught speed in the initial days of last year, the work as halted as soon as monsoon began. After that, construction work was affected as workers took leave for the major festivals, and provincial and federal elections, say government officials.

Sharma explained that construction work could not kick off in time due to delay in getting permission from the Kirtipur Municipality.
The government has now extended the project's deadline to May 31, 2018.

“Upon our request, the World Bank has agreed to extend the project completion deadline until the end of May,” said Sharma.

Sharma also said that stakeholders were meeting at the project site every fortnight to supervise the construction works.

With the construction of the mega market, Chobhar stands as an interjection for various economic infrastructure projects including the Outer Ring Road. While talks are being made to build a dry port in the area, the small town on the outskirts of Kathmandu is set to become an important economic zone.

BIRGUNJ, Nov 30: The deadline for completing six-lane road for the country’s major trade route, Birgunj-Pathlaiya, has been postponed because of... Read More...

KATHMANDU, May 25: Construction work on the Central Fruit and Flower Market in Chobhar, which was affected by Ring Road widening... Read More...

Presidential election to be held on March 9
4 hours ago

Nepse nosedives with a fall of 41.16 points, daily turnover records Rs 3.30 billion on Monday
14 minutes ago