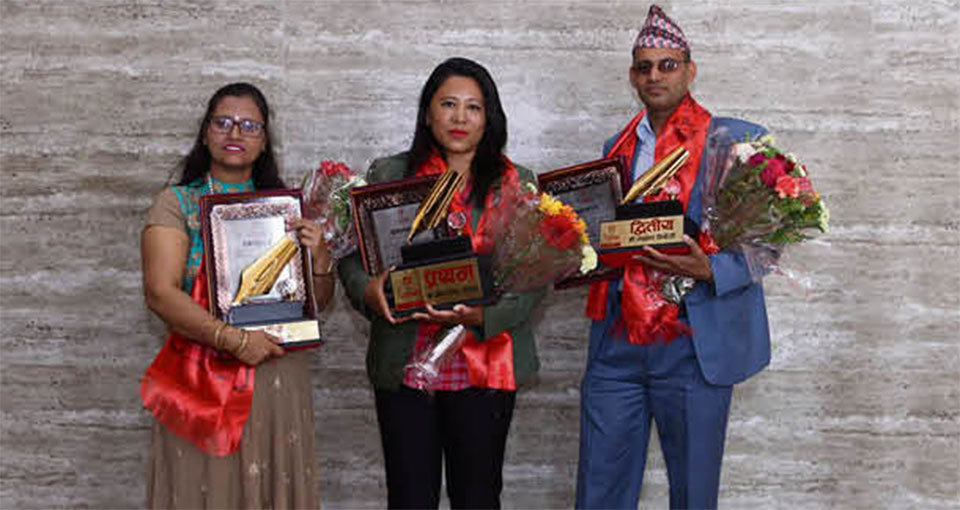 KATHMANDU, April 20: Litterateur Bina Thing Tamang has bagged the first prize in the nationwide open story competition organized by Barhakhari Books. Tamang's story titled “Byad Bhale” was awarded the first prize that carried a purse of Rs 100,000, a shield and a certificate of appreciation.

Journalist and litterateur Laxman Biyogi was awarded the second prize with a purse of Rs 60,000 for his story titled “Tauko”. Similarly, Sumitra Neupane bagged the third prize for her story titled “Bardali'. The award carried a pursue of Rs 40,000, a shield and a certificate of appreciation.

Barhakhari Book also published a collection of 25 stories from among the 445 stories that met the criteria set for the competition. Minister for Foreign Affairs, Pradeep Kumar Gyawali gave away the awards and also released the collection of the stories amidst a special function held in Kathmandu on Friday.

The organizers said they had invited story submission from February 4 to March 4. The authors of 22 of the 25 best stories published in the book titled Best Stories 2076 BS were given away Rs 5,000 each as reward.

KATHMANDU, Nov 2: Children below five years across the nation are being administered Vitamin 'A' and de-worming tablets today and... Read More...

KATHMANDU, Sept 6: Clean Up Nepal is all set to organize the fifth edition of annual nationwide cleanup campaign on September... Read More...