273,703 households nationwide don’t have a toilet 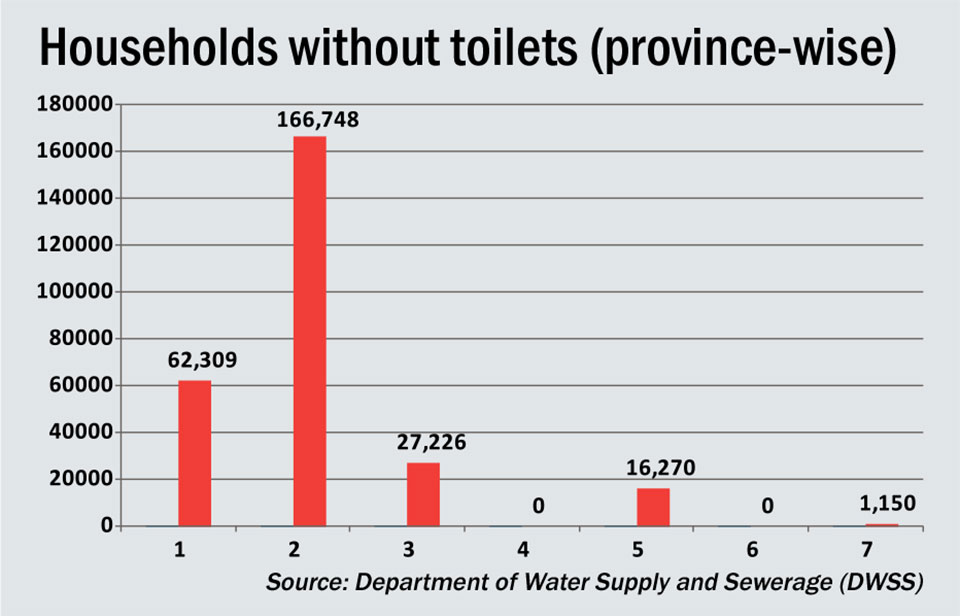 KATHMANDU, Feb 5: A total of 273,703 of the 5,373,800 households in the country do not have a toilet, according to government data. Similarly, among the seven provinces, Province 2 has the highest number of people practising open defecation while every household in provinces 4 and 6 has at least one toilet.

According to the Department of Water Supply and Sewerage (DWSS) under the Ministry of Drinking Water and Sanitation, there are a total of 5,373,800 households across the country. Among them, 5,100,097 (94.91) households have at least one toilet while 273,703 households do not have toilets at all. A total of 5.09 percent households in the country still practice open defecation.

A total of 36,834 of the 108,334 households in Bara district don’t have toilets. Kaski district with 108,481 households was the first one to be declared an ODF zone on June 24, 2011.
The districts which are yet to complete the construction of toilets to be declared ODF zones are Sunsari, Jhapa, Morang, Saptari, Siraha, Rautahat, Dhanusha, Mahottari, Sarlahi, Parsa, Bara, Sindhuli, Nuwakot, Ramechhap, Sindhupalchowk, Dhading, Dolakha, Kavrepalanchowk, Kathmandu, Rupandehi, Banke, Kapilvastu and Kailali.

The government failed to meet the target of the UN Millennium Development Goals that planned to construct at least one toilet in each household by 2017 though millions of rupees is spent annually on the ODF campaign.

The government allocates Rs 350 million annually for sanitation including about Rs 220 million for the ODF campaign, according to the DWSS. The donors, INGOs and NGOs spend annually more than the government for the same purpose.

“The government spends on awareness programs but does not provide grants to people,” said Prem Krishna Shrestha, chief of the Environmental Sanitation Section of the DWSS. “We tried to get the records of funds spent by donors, INGOs and NGOs on the ODF sector but in vain,” he added.
“We are planning to achieve the target by 2019,” said Dinesh Kumar Thapaliya, secretary at the Ministry of Federal Affairs and Local Development. “The local bodies will work to meet the target,” he added.

Dr Shree Krishna Giri, spokesperson for the Ministry of Health, said that toilets are mandatory requirement as sanitation falls under the health indicators.

“Every household must have at least one toilet which must be used to prevent contamination and communicable diseases like Hepatitis and diarrhea,” said Dr Giri. “Water, vegetables and food can be contaminated due to open defecation,” he added, “As a result, we have to suffer from various diseases which can kill us.”

Hari Sharma has closely observed Nepali politics from both in and out of government and is widely known for his... Read More...