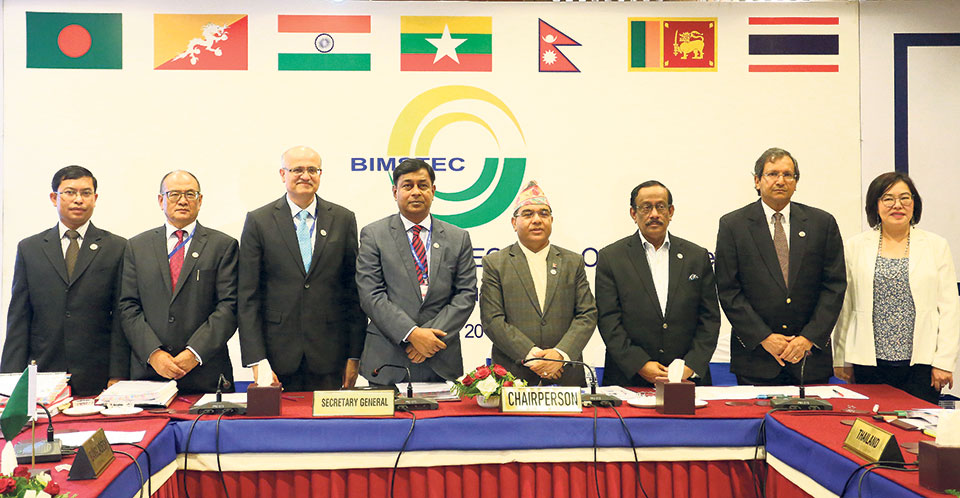 Foreign secretaries of the BIMSTEC member states at the SOM meeting in Kathmandu on Tuesday. Photo: Republica

KATHMANDU, Aug 29: The 19th session of BIMSTEC Senior Officials’ Meeting (SOM) concluded in Kathmandu on Tuesday. The meeting decided to recommend signing Memorandum of Understanding (MoU) for the establishment of BIMSTEC Grid Interconnections during the summit.

Addressing a press conference organized to brief the outcomes of the meeting represented by foreign secretaries of the member states, Spokesperson at the Ministry of Foreign Affairs Bharat Raj Paudyal said the meeting considered recommending a number of reports on various mechanisms related to customs cooperation, connectivity, technology, counter terrorism, transnational crime and agriculture among others for approval.

Reports presented by BIMSTEC Secretary General on poverty alleviation, public health, matters relating to strengthening the Secretariat and adoption of the budget of the Secretariat were also discussed by the SOM.

KATHMANDU, Jan 30: EC has announced it will hold the presidential election on March 9 and that of vice president... Read More...

KATHMANDU, Jan 30: Vice Chairman of the ruling CPN (Maoist Centre) Krishna Bahadur Mahara has said that it is the... Read More...

Dhangadhi, Jan 30: Arun Kumar Chaudhary, who was elected as a Member of Parliament (MP) from Kailali Constituency No. 2,... Read More...