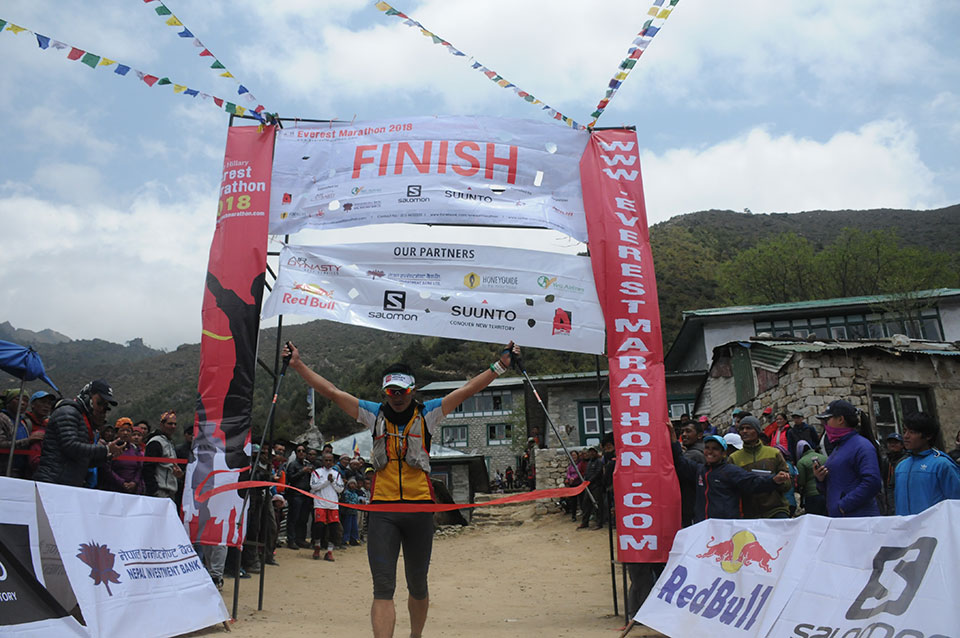 KATHMANDUl MBhim Bahadur Gurung has clinched the title of Tenzing Hillary Everest Marathon 2018 held in the Everest region in Solukhumbu district on May 29.

Gurung, the winner in 2015, finished the highest marathon clocking 4 hrs 02 mins 30 secs, ahead of defending champion Suman Kulung and Bed Bahadur Sunuwar who finished the race with the timing of 4:06:10 hrs and 4:28:35 hrs, respectively. Sunuwar won the race in 2016.

Tirtha Tamang of Nepal clinched the title of 60-kilometer Everest Ultra Run, clocking 6:56:13. He finished the race ahead of Kiran Kulung (7:41:08) and Mohan Dev Joshi (8:34:31) who finished the ultra run in second and third position, respectively.

In the women's category, Purnima Rai finished first with the timing of 5:20:56, ahead of Nirkala Rai (5:27:22) and Padam Kumari Rai (5:52:21), who finished the marathon in second and third position, respectively.

The 15th series of Tenzing Hillary Everest Marathon kicked off at the Mount Everest Expedition Base Camp at 7:00 am, and passed through beautiful Sherpa villages of Gorakshep, Lobuche, Dokla, Dingboche and Tengboche before concluding at Namche Bazaar.

Over 200 runners, including 139 foreigners from 31 countries like the US, UK, Germany, New Zealand, China and as far as Peru, participated in the highest marathon in the world this year.

Likewise, in the foreigners' category, Manuel Seyr of Germany finished first with the timing of 5:59:29, ahead of British runner Jonathan Bamber (6:13:06) and Joshua Blyleven of New Zealand (6:30:38), who finished the marathon in second and third position, respectively.

Bamber, who has been dubbed Miracle Man by British media, has been an inspiration for many. He fell hanging from a rope 1600m off the ground while he was near the summit of Tipendu Peak in India. The impact sheared through both bones of his legs between ankle and knee redoing a big chuck off. It took two days to get him out of the situation and six days to get him off the mountain. Doctors performed surgery on him, taking muscle from his shoulder and stapled it in his leg, vein by vein. Though doctors had said that he’d never walk again, Bamber won a local half marathon, 10 years after the accident. He continued his amazing recovery in Tenzing Hillary Everest Marathon as well.

Similarly, in the half marathon category, New Zealander Jayden Klinac finished first with the timing of 2:59:35, ahead of Don Kook Won of South Korea and Dipesh Sabharwal who finished the 21-kilometer race, clocking 3:19:45 and 3:37:32, respectively.

Marathon winner Bhim Bahadur Gurung said he was happy to win the race again. "After the Everest Marathon victory in 2015, I have participated in many national and international running events. Experience of those events helped me win this race again," he added.

Similarly, winner of Women's category Purnima Rai, said it was good to return to winning ways. "Last year I finished the race in the second position. This year I am happy to finish first," Purnima, who won the category in 2016, said.

Likewise, Tirtha Tamang, who completed hattrick of wins in the Everest Ultra Run, said he was happy to set the rare feat. "Running this trail gives us confidence that we can run anywhere in the world," he added.

Bamber, who finished second in the Foreigners' category, said Everest Marathon was a tough race but one of the most beautiful ones. "Today, the weather worked for me because it was a bit cloudy - not too hot and not too windy. I and Manuel, who came first, did the Island Peak (6,189m) before this marathon. Maybe, that is why we performed better," he added.

Himalaya Expeditions has been organizing the marathon regularly for the past 15 years to commemorate the first ascent of Mt Everest by Sir Edmund Hillary and Tenzing Norgay Sherpa on May 29, 1953.

Over 200 runners participating in Everest Marathon

KATHMANDU, May 16: More than 200 runners from 31 countries are participating in 15th series of Tenzing-Hillary Everest Marathon 2018... Read More...