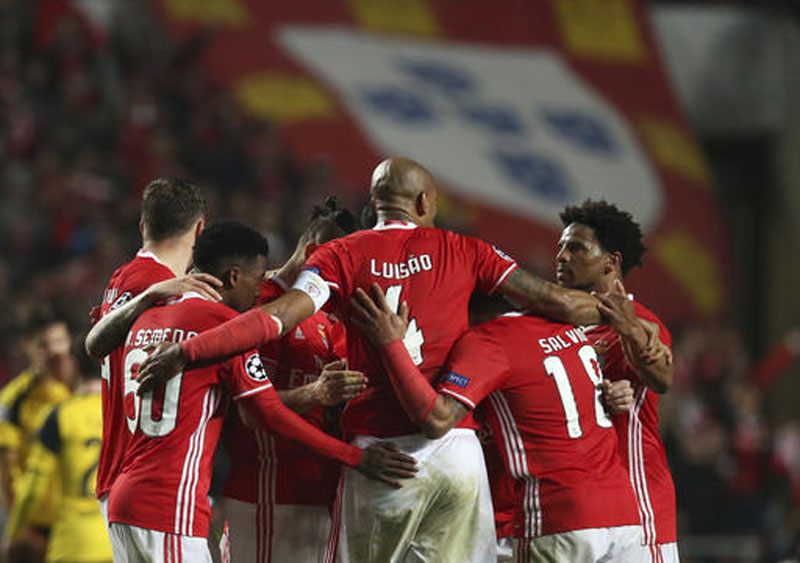 Benfica players celebrate at the end of the Champions League round of 16 first leg match between Benfica and Borussia Dortmund at the Luz stadium in Lisbon. (Armando Franca/Associated Press)

LISBON, Feb 15: Borussia Dortmund squandered chance after chance, including a second-half penalty, before slumping to a 1-0 defeat at Benfica in their first leg match of the Champions League's Round of 16 on Tuesday.

Kostas Mitroglou scored shortly after halftime and goalkeeper Ederson made some key saves afterward to help Benfica hold on for victory at the Stadium of Light.

Pierre-Emerick Aubameyang missed the penalty in the 58th minute, when his shot was stopped by the Brazilian goalkeeper.

"That's only possible in football, to play this well and to still lose," Dortmund coach Thomas Tuchel said. "Luckily, there's a return leg for such games. It is an extremely complicated result, but I am very proud of how we played tonight. Even though I am very disappointed, I am proud of how we presented ourselves."

Benfica will be looking to reach the quarterfinals for the second straight season in the second leg on March 8 in Germany.

In the other Round-of-16 match on Tuesday, Paris Saint-Germain stunned Barcelona 4-0 in the first leg in France.

Mitroglou broke the deadlock following a corner early in the second half after a header by defender Luisao, who was making his 500th appearance for Benfica. Mitroglou's initial effort was parried by goalkeeper Roman Burki but the striker was able to bundle home the loose ball.

It was Benfica's only attempt on target the entire match.

"We fought, gave our best, and victories are also made of that," Benfica coach Rui Vitoria said. "Congratulations to Ederson too, a keeper who showed his quality once again, this time against a team that scored so many goals in the group stage."

Dortmund's attack had thrived in the group phase, setting the competition's all-time scoring record with 21 goals in six games, but it faltered in Lisbon even though the German side controlled possession throughout the game.

"We should have and could have taken more from this game. We put in a top performance, we created many chances," Dortmund midfielder Julian Weigl said. "A 1-0 defeat is not the best position for the return leg, but we play in our stadium and it is still possible."

Aubameyang's penalty was straight at the middle of the goal and Ederson was able to make an easy save. The goalkeeper had already made two great stops shortly after halftime, and after a long-range shot took a deflection off a defender in the 84th.

"We knew that they had strong and quick players up front," Ederson said. "They created a lot of difficulties for us but we were prepared."

Aubameyang had missed two other great opportunities with shots from inside the area, one in each half, and Ousmane Dembele nearly scored in the first half when his close-range shot was blocked in front of the goal.

Benfica hasn't conceded in four home games and has won 13 of its last 16 matches, with only two losses.

The Portuguese champion had to play without its top forward, Jonas, who didn't recover from a back problem.

Vaccine procurement scandal is not just a case of corruption but a ‘crime’: MP Thapa
12 hours ago

E-commerce companies’ survival at stake, urge govt to allow their operation
13 hours ago

E-commerce companies’ survival at stake, urge govt to allow their operation
13 hours ago

Myagdi district is self-sufficient in oxygen
14 hours ago

COVID-19 spreads to rural India, villages ill-equipped to fight it
14 hours ago