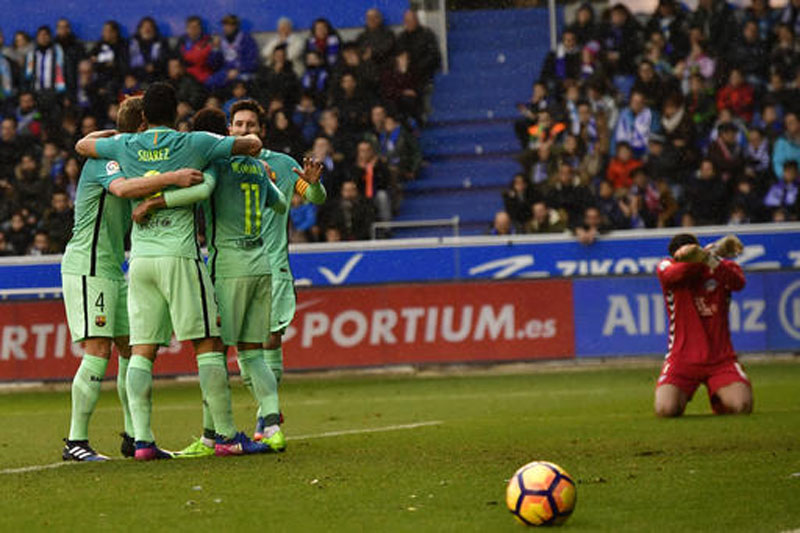 Barcelona's Neymar Jr. celebrates his goal with his fellow teammate after scoring during the Spanish La Liga match between Barcelona and Deportivo Alaves, at Mendizorroza stadium, Spain on Saturday. (Alvaro Barrientos/Associated Press)

MADRID, Feb 14: The knockout stage of the Champions League begins today with Barcelona looking to extend its successful record against Paris Saint-Germain, and defending champion Real Madrid trying to confirm its favoritism over Napoli.

Borussia Dortmund and its record breaking attack takes on Portuguese champion Benfica, while Arsenal faces Bayern Munich trying to avoid its seventh-straight elimination in the Round of 16.

Bayern, which won the title four years ago, is going for its fourth-consecutive semifinal appearance.

Five-time champion Barcelona eliminated PSG in the quarterfinals in 2013 and 2015, and lost only one of the last six games against the French club in the European competition, in the group stage in 2014.

"No team is unbeatable, but of course for me they are the favorites," PSG striker Lucas said. "They are the best team in the world, you have to respect them."

It's not just about Paris Saint-Germain stopping Lionel Messi on Tuesday. Barcelona also has to find a way to contain Edinson Cavani.

Cavani has scored nine goals in his last six games, and 33 in all competitions this season, which is one more than Messi has. Cavani is well on track to shatter his career-best mark of 38, set with former club Napoli.

Messi and Cavani enter the duel at Parc des Princes as the Champion League's top scorers — Messi with 10 and Cavani with six.

Barcelona has also been able to rely on Messi's teammates Neymar and Luis Suarez, but PSG remains highly dependent on Cavani. Only Brazilian winger Lucas has hit double figures this season aside from Cavani.

Real Madrid and Napoli will both defend unbeaten streaks at Santiago Bernabeu Stadium on Wednesday.

Madrid hasn't lost at home in 11 Champions League matches, while Napoli is on an 18-match unbeaten streak in all competitions, one short of the club record.

The Spanish club has won nine matches and drawn twice since the home loss to Schalke in March 2015. Napoli, playing in the last 16 only for the second time in club history, has won 12 games during its streak.

Some 10,000 Napoli fans are traveling to the match, according to the Gazzetta dello Sport. In addition to the 4,000 Napoli supporters who bought tickets for the visitors' section, many more have found tickets for other areas of the Bernabeu — some even by buying Madrid membership cards.

Among the Napoli fans expected in Madrid is its most famous former player, Diego Maradona, who has said he plans to attend the game.

Germany is waiting for Bayern Munich to show the same dominance it displayed at the start of the season or under previous coach Pep Guardiola.

There is a sense that the freedom afforded to the players by Carlo Ancelotti has allowed complacency to creep in, evident in five labored performances since the winter break.

Only two very late goals secured a win over relegation-threatened Ingolstadt at the weekend, affording Ancelotti some breathing space. But the Italian knows more lackluster performances against Arsenal could lead to Bayern's first exit in the Round of 16 since Inter Milan prevailed on away goals in 2011.

Arsenal won 2-0 in Munich at this stage in 2013, but it was still eliminated on away goals after a 3-1 loss in the first leg.

Borussia Dortmund thrived in the group stage and set the competition's all-time scoring record with 21 goals in six games, but the squad is under pressure following disappointing recent performances in Germany.

"We're finding it really hard ... to show this sharpness in these games away from the big stage, away from the spotlight," Dortmund coach Thomas Tuchel said following the Bundesliga loss to bottom club Darmstadt on Saturday, a result that left the team 15 points behind leader Bayern Munich.

Benfica is playing in the knockout stage for the second straight season, a first for the club. It was eliminated by Bayern Munich in last year's quarterfinals.