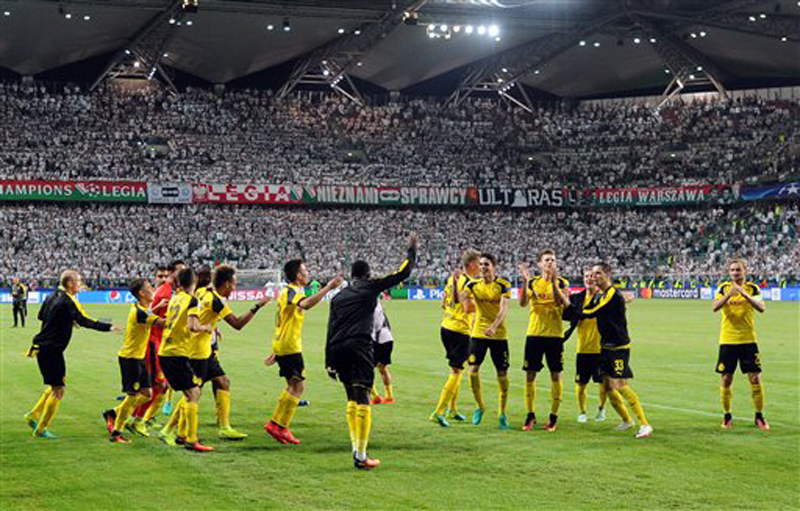 WARSAW, Sept 15: Borussia Dortmund spoiled Legia Warsaw's long-awaited return to the Champions League with a 6-0 away rout of the Polish champion on Wednesday.

The home side, which reached the quarterfinals on its previous appearance in 1995-96, looked out of its depth against Dortmund's speedy forwards, who were keen to make amends for losing to promoted Leipzig in the Bundesliga on Saturday.

Back in the Champions League after a season away and a summer of upheaval, Dortmund raced into an early lead with three goals in the first 17 minutes of the Group F encounter.

Mario Goetze grabbed his first goal for Dortmund since his return for Bayern Munich in the seventh minute, with a perfectly placed header to Ousmane Dembele's cross.

Pierre-Emerick Aubameyang should have made it 2-0 shortly afterward but Warsaw 'keeper Arkadiusz Malarz twice got the better of him when Christian Pulisic was also in a position to score.

But Sokratis Papastathopoulos scored in the 15th when he was relatively free to head in Raphael Guerreiro's free kick, two minutes before Juan Bartra claimed his first Dortmund goal from close range after Malarz had pulled off three saves to deny Guerreiro, then Aubameyang and Marcel Schmelzer.

Thibault Moulin tried chipping Roman Buerki before the break but the Dortmund 'keeper peddled back to catch the ball.

Guerreiro made it 4-0 early in the second half after Dembele's initial effort was blocked, Pulisic set up substitute Gonzalo Castro in the 76th, before Aubameyang chipped the goalkeeper to complete Warsaw's miserable evening in the 87th.

The club, Poland's first Champions League representative since Widzew Lodz in 1996-97, now has six defeats and no wins in nine meetings against German sides.

PHOTOS: Bishalbazaar area in Kathmandu sealed off until August 21 after a local tests positive for COVID-19
19 hours ago

PHOTOS: Bishalbazaar area in Kathmandu sealed off until August 21 after a local tests positive for COVID-19
19 hours ago