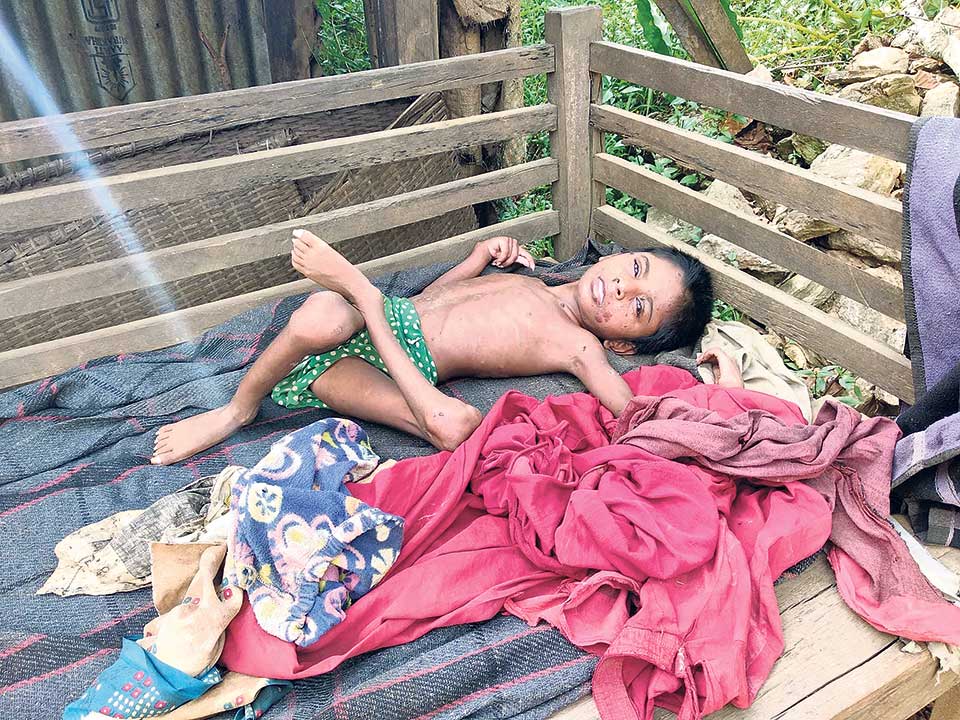 Asmita Nepali of Khoplang who has been suffering from serious disability from birth. | Photo: Narahari Sapkota/Republica

GORKHA, Sept 23: Asmita Bhandari of Palungtar Municipality-2, Pauroti Bhandar is bed-ridden since birth. She can neither move her hands and legs nor can she speak. As she cannot move her body, she defecates on the bed. The miserable condition of their first child often makes the parents burst into tears but they can do nothing much.

Despite her ailing health, she has never been to a hospital due to the poor financial condition of her family. He parents struggle to manage two square meals a day.  Her father Suraji Nepali has taken her to health posts for minor checkups but never taken her to a reputed hospital, as he knows he cannot afford the fees. He fears that his daughter may have to spend the rest of her life with her illness.

Though her age is growing each day, Asmita's body has not developed. She is 12 years old but she looks like a seven or eight years old child. There are allergies all over her body due to lack of sanitation. She spends her days sleeping under the blue sky in daytime and under dilapidated zinc roof at night. Her parents figure out that she is in pain only after looking into her teary eyes. Unfortunately, she cant express her pain through words.

Suraji was in India in search of employment when he tied a knot with an Indian woman. He returned to Nepal after marriage and now has two sons and three daughters. They lament that their disabled daughter has been a burden for them especially because of poverty.  Not just her but their ten years old son is suffering from mental illness. He often wanders around with no clothes on. He spends most of his day in the forest and returns home only for sleep.

The security allowance provided by the government in the name of Asmita is the only permanent source of income for this family. "We reach out to different places seeking jobs so that we can feed our family," said Suraji, adding, "This is the reason why we can't take care of our children." It becomes a real trouble when Suraji himself falls ill as he has leprosy.

The miseries of this family do not just end here. Asmita's ninety-three years old grandfather has been urinating through the pipe for last 20 years. However, a large of youths, teachers and Asmita's uncle have been actively posting pictures of her in social media for seeking help. So far, they have been successful in collecting Rs 50, 000 for her treatment.

The Power of Poverty, Money and Love

When I think about (poverty, money and love), to my mind I can sense out that all of three are... Read More...

KATHMANDU, Nov 5: A concrete policy to reduce poverty is still lacking in the country. ... Read More...

Amitabh Bachchan, who is gearing up for the Global Citizen Festival India (GCFI), has urged everyone to support poverty eradication.... Read More...