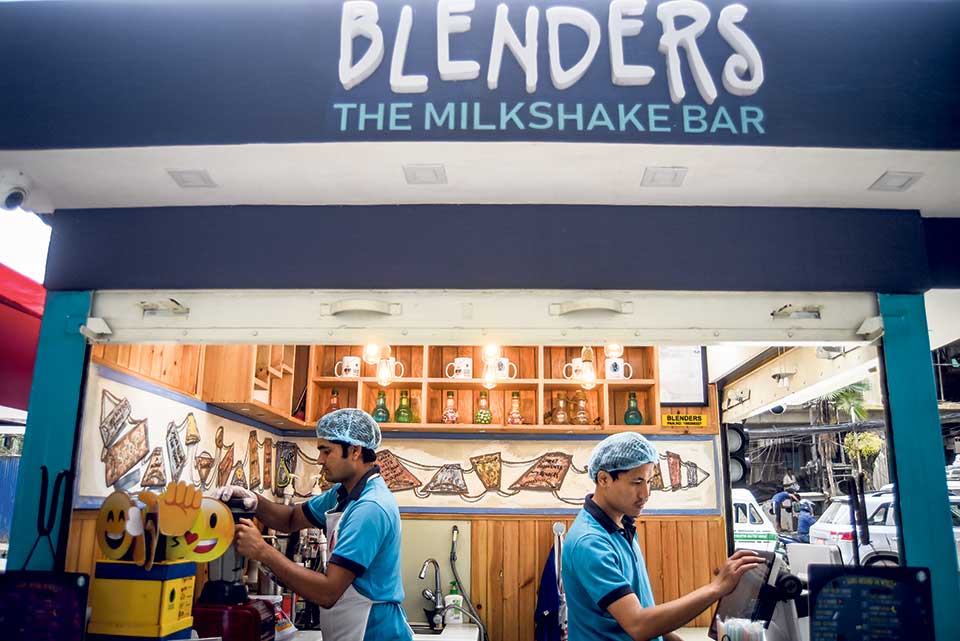 If you are active on either Instagram or Facebook, you might have seen these cute little bottles in the shape of filament tubes branded Blenders. These are the bottles of the first Nepali milkshake brand ‘Blenders, The Milkshake Bar’. Launched early May this year, currently the milkshake brand has a single outlet at City Center in Kamalpokhari, Kathmandu, with plans of opening another outlet during Dashain this year.

Bivechan Khanal, co-founder of Blenders, claims he got the idea of opening a Nepali milkshake brand about three years ago at the food court in a mall in Dubai. When he came back to Nepal, he shared this idea with his friend – and the other co-founder of Blenders – Basant Bakshi. Bakshi really liked the concept but the two of them could not start working on it immediately because of their already busy schedules. Khanal works in the aviation industry and Bakshi is a banker.

It was only around eight months ago that Khanal and Bakshi finally started working properly with the intention of opening Blenders. Khanal states that the two of them did a lot of research regarding the flavors, making process, branding, and the Nepali market before finally launching Blenders. “At one point we even visited a lot of international milkshake brands and their outlets to study how they operate,” he says.

As they were midway through their preparations for the launch of Blenders, another milkshake brand was introduced in Nepal and, soon after their launch, they became really popular among Nepalis, especially the young crowd. “At first we weren’t sure if we could establish Blenders as a good milkshake brand since this new brand had launched just a few months prior to our scheduled launch. And both brands were working in the same niche,” says Khanal adding that they quickly realized that they weren’t going to enter the market with competition on their minds. “We decided to try to create our place as a new brand and let the consumers decide if they liked us or not,” he adds further claiming that the Blenders team is working diligently towards that.

Besides Khanal and Bakshi, Blenders currently employs three other individuals who are involved in preparing the milkshakes at their sole outlet. They have also collaborated with Studio Sarcastic for branding and digital promotions and Khanal claims that he is very grateful to Sneha Koirala – the founder of Studio Sarcastic – for supporting Blenders from their starting phase and spreading the word about the brand.

Currently, Blenders has about 15 different flavors of milkshakes – all of which are named after a city. Khanal reveals that the reason behind this is to make the names of these milkshakes more memorable since customers can connect their favorite flavors to a specific city or country rather than mixing up the names of two similar milkshakes. Choco-holm Chips, Kit-Kathmandu and Mangolia are the most popular flavors among their customers.

Khanal claims that Blenders has been quite a hit among the Nepali crowd. He reveals that, till date, everyone who has tried the milkshakes has always given positive feedback on it. And although their primary target group is the youngsters of Kathmandu, everyone from children to elderly people visit their outlet to enjoy their milkshakes.

Khanal and Bakshi have relied heavily on digital platforms to promote Blenders. The brand’s Facebook and Instagram pages are constantly updated and the Blenders team is also quick to respond to the messages sent by their followers on these sites. Blenders has also collaborated with a number of Nepali food bloggers to promote their brand. “Right now, we are working on our upcoming projects where we are partnering with eSewa and Foodmandu. Besides that, we will also introduce a few new flavors to our customers within a month or two,” concludes Khanal. 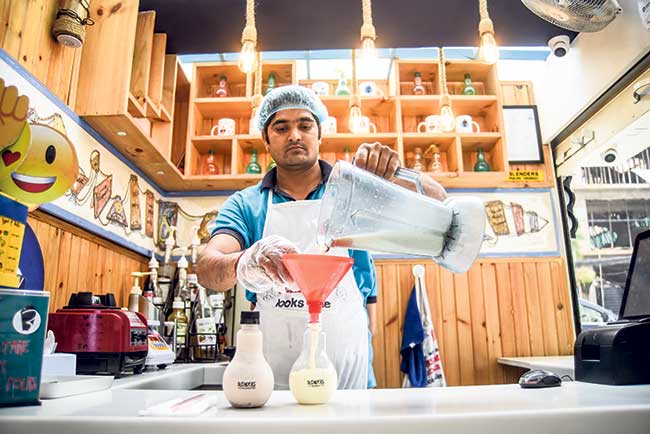 KATHMANDU, Feb 17: Over 12 ropani of land belonging earlier to the well-known heritage site of Kamalpokhari at Thamel but... Read More...

Souls of My City: Unpredictable life

Taiyab Hussain, 62, is from Bihar.  He owns a shop at Kamalpokhari. “I came to Kathmandu with my elder brother.... Read More...