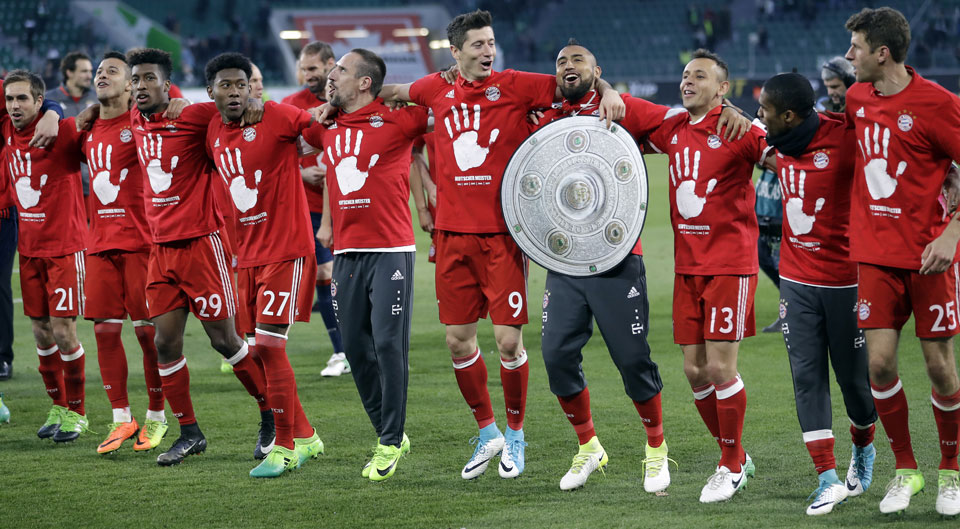 Lewandowski took his season tally to a league-leading 28 goals for Bayern to seal its 27th German title overall with three games to spare.

"Winning the championship is never a given," Bayern captain Philipp Lahm said.

No German side had won more than three titles in a row before Bayern made it four last year. This fifth title will go some way in helping Carlo Ancelotti's side get over its recent Champions League and German Cup exits to Real Madrid and Borussia Dortmund, respectively.

"Of course we have a few regrets about the last 15, 20 days," Ancelotti said. "But now is the time to celebrate and we have time to prepare for the new season."

Bayern leads second-placed Leipzig by 10 points and can no longer be overtaken.

"The championship is the most prestigious title. We're champions for the fifth time in a row. It's outstanding and incredible," Bayern chairman Karl-Heinz Rummenigge said.

"We don't have the arrogant demand to win the treble every year. We played a good season," Rummenigge added.

Wolfsburg, languishing one point above the relegation zone in its worst ever Bundesliga season, offered little resistance.

Lewandowski and Thomas Mueller both went close before David Alaba broke the deadlock just inside the 20-minute mark with a finely struck free kick.

Some 15 minutes later, Kingsley Coman ran onto Thiago Alcantara's pass and crossed for Mueller, who teed the ball up for Lewandowski to pick his spot inside the right post.

There was still time before the break for the Poland striker to claim his second, thanks to another run from Coman and some lackluster Wolfsburg defending.

Alaba hit the crossbar after the break, but Arjen Robben claimed the fourth goal midway through the half with a low shot inside the right post.

Lahm made way with 20 minutes remaining as Rummenigge and other club officials were celebrating with beer in the stands. Both Wolfsburg coach Andries Jonker, who coached Lahm when he was interim Bayern coach, and Ancelotti congratulated the former Germany captain on what was to be his eighth Bundesliga title.

Wolfsburg's misery was compounded when Luiz Gustavo earned his second yellow card — the furious Brazilian had to be wrestled away from the referee by his teammates — and then Mueller made it 5-0 on the rebound after Lewandowski hit the post.

"In the end it felt like men's football against kids' football," Wolfsburg striker Mario Gomez said of facing his former side.

ROME, May 22: Juventus clinched a record sixth straight Serie A title with a 3-0 win over relegation-threatened Crotone in... Read More...

German champions Bayern Munich on Friday announced record turnover for the 2015-16 financial year of €627 million, up by more... Read More...

There is a need to introduce fiscal policy reforms for Nepal’s transition to green, resilient, and inclusive development: WB report
23 hours ago

Madrasa education to be included in government curriculum
10 hours ago

The trials of Aung San Suu Kyi, from heroine to villain to convict
11 hours ago

NC not for a show of strength during General Convention: Deuba
23 hours ago