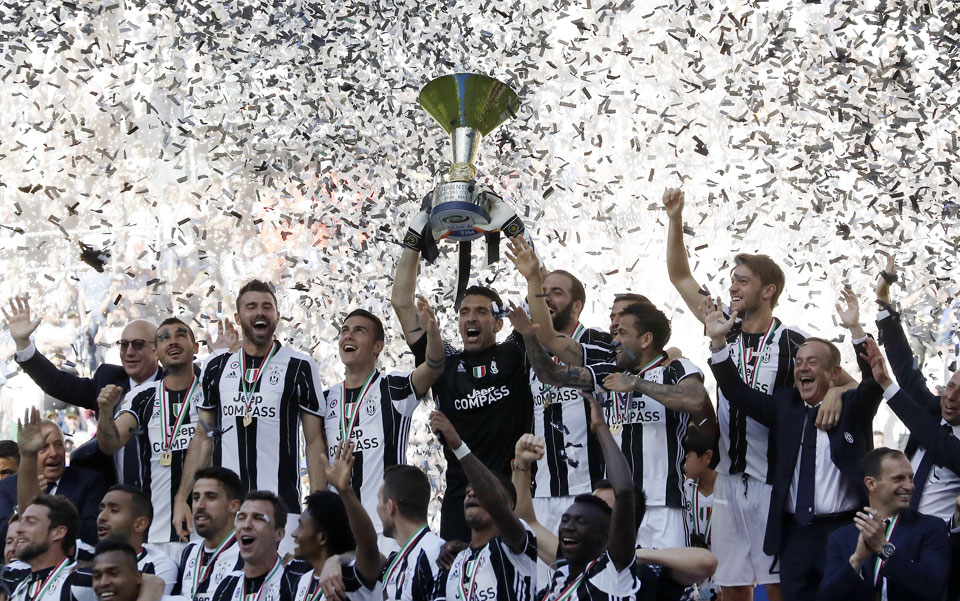 ROME, May 22:  Juventus clinched a record sixth straight Serie A title with a 3-0 win over relegation-threatened Crotone in the penultimate round on Sunday.

Mario Mandzukic gave Juventus the lead 12 minutes in by redirecting a cross from Juan Cuadrado, Paulo Dybala scored with a precise free kick shortly before the break and Alex Sandro added another with a header near the end.

Since Serie A was founded in 1929, no club had previously won more than five straight titles.

Torino won five consecutive titles from 1943-49 (including a season that was canceled due to World War II), Inter Milan took five straight from 2006-10 and Juventus claimed a handful from 1931-35.

"We've written one of the greatest pages in the book of football history," said Juventus captain Gianluigi Buffon, who also won the 2002 and 2003 Serie A titles with Juventus.

"Winning is never easy," Buffon added. "Beyond what people say, staying at the top is synonymous with sacrifice on everyone's part. ... If you want to always win matches, you've got to always have your head in focus and your legs prepared."

It's the second title in five days for Juventus after a 2-0 win over Lazio in the Italian Cup final on Wednesday.

The Bianconeri has a chance to complete the treble with a victory over Real Madrid and Cristiano Ronaldo in the Champions League final on June 3.

Juventus also added to its record number of Serie A titles, with its 33rd.

Players dumped shaving cream over the head of manager Massimiliano Allegri at the final whistle, then put on celebratory T-shirts with a '6' on them.

"First of all, I've got to complement the players who have won six straight titles. They're the ones going down in history," said Allegri, who replaced Antonio Conte in 2014.

Allegri, who has aspirations of following Conte to the English Premier League, wouldn't confirm that he'll remain with Juventus.

"It depends on both of us," Allegri said when told that club director Giuseppe Marotta inferred his future is up to the coach. "I'm very happy at Juventus. But now we've got to focus on playing, and possibly winning, the (Champions League) final in Cardiff."

Crotone remained third from the bottom, one point behind Empoli in the battle to avoid being the final club relegated.

Empoli was beaten 1-0 at home by fifth-placed Atalanta, which got an early goal from Alejandro "Papu" Gomez and qualified for the Europa League group phase.

Genoa removed itself from the relegation chances with a 2-1 win over Torino, getting goals from Luca Rigoni and Giovanni Simeone — the son of Atletico Madrid manager Diego Simeone — before Adem Ljajic pulled one back for Torino.

Last-placed Pescara, which has also already been relegated, hosts Palermo on Monday to conclude the penultimate round.

AC Milan ended a run of three seasons without European play by beating Bologna 3-0 to secure sixth place and a spot in the Europa League playoffs.

Gerard Deulofeu scored with a volley in the 69th, Keisuke Honda added a free kick four minutes later and Gianluca Lapadula redirected a cross from Mati Fernandez in added time.

Inter Milan came back from a goal down to beat fourth-placed Lazio 3-1 and end an eight-match winless streak.

After a penalty from Keita Balde Diao gave Lazio the lead, Marco Andreolli leveled with a header, Wesley Hoedt scored an own goal and Eder added another for Inter.

Lazio ended with nine men after Keita and Senad Lulic each picked up two yellows.

The loss left Lazio one point ahead of Atalanta.

An open letter to Ram Narayan Bidari
22 hours ago

Are we falling prey to the tech world?
21 hours ago

Trading via Tatopani and Rasuwagadhi still closed despite government assurance: Importers
19 hours ago