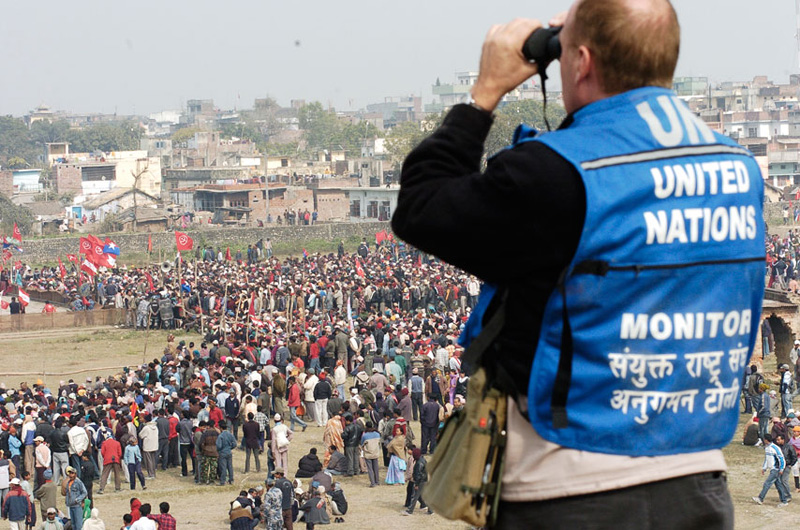 The ‘paper armies’ never materialized but Maoist leaders continued to collect their salary and perks for five years
Four years have already passed since the issue of cantonment corruption formally landed in the CIAA. Disgruntled Maoist combatants and the Youth Association of Nepal (YAN), a youth organization aligned with the CPN-UML, had registered a complaint demanding investigation into misuse of state funds meant for UN-supervised Maoist guerilla fighters.

The government used to provide salary and allowances to 19,602 cantoned Maoist combatants. The Maoist leaders pocketed millions themselves as many of these fighters were fake.

Soon after the scam reached the CIAA, Secretary Bhagwati Kafle began investigation but stopped it abruptly. The Moaist party’s carrot and stick approach was one reason for Kafle’s reluctance to expedite investigation. Being a bureaucrat Kafle, who was also heading the anti-corruption body as acting chief commissioner in the absence of constitutionally appointed commissioners at the time, could not dare to act tough in corruption cases involving big political figures on his own.

In the meantime, Lokman Singh Karki, a former Chief Secretary with a controversial track record, managed to take charge of the Tangal Durbar despite widespread criticism. Karki was accused of accumulating disproportionate properties and even dragged in gold smuggling scam during his previous stay in government. He was appointed head of the anti-corruption body at a time of parliamentary void in the country. At this time the by-then a year-old cantonment corruption issue was going nowhere.

Three months after assuming office Karki, in an interview with BBC Nepali Service, said, “I consulted concerned investigators. They have informed me that the investigation [into cantonment corruption] is now at final stage. No stone will be left unturned. Nobody will be spared from prosecution regardless his/her position”.

His ‘false promise’ was made only to silence his opponents. So he has not done anything to settle the infamous cantonment corruption during his three years in power.  Informed leaders say Karki had reached an understanding with Maoist leaders before his appointment. The cantonment corruption, considered one of the high-profile corruption scandals of post-republic era, had become a headache for Maoist leaders after they embezzled millions meant for UN monitored Maoist combatants. Maoist leaders and ministers responsible for handling peace and finance ministries were subsequently questioned after 2,432 of the total 19, 602 UN-verified combatants were found perpetually absent.

Those ‘paper armies’ never materialized but Maoist leaders continued to collect their salary and perks for five years and channel it to party headquarters. In addition, Maoists deducted Rs 1,000 from each combatant and 20 percent commission was charged on suppliers of rations. Most of money siphoned from absentees and other sources was transferred to party headquarters.

The same cantonment corruption case is once again in limelight after the Karki-led CIAA said it was again opening the cantonment files. It seems corruption-accused PM Dahal and Karki are bargaining behind the scenes to settle their past wrongdoings. PM Dahal has himself briefed his party leaders that an understanding had already been reached with CIAA chief Karki and that Karki had also forged an understanding with the Supreme Court regarding his appointment as CIAA chief.

This has not only weakened Nepal’s anti-corruption drive but also tarnished the image of the one-time acclaimed anti-corruption body. It is clear that after taking charge of CIAA, Karki has been abusing his authority just to fry personal enemies and to prolong his stay in power.

CIAA should have investigated this kind of corruption right after complaints were lodged. Even if the bureaucrat-led CIAA has no such courage, the current CIAA chief Karki, who often claims to be working for the country and the people, should have investigated. It is easy to marshal evidence in this case as the Office of the Auditor General has already pointed out lapses over the faulty salary and allowance distribution process in cantonments.

Going back to Karki’s appointment, questions were raised right after the High-level Political Mechanism formed to assist the then Khil Raj Regmi government in April 2013 recommended Karki as CIAA chief. Karki didn’t have 20 years of working experience, as mandated by the constitution for a CIAA chief. He was involved in suppressing the 2006 pro-democracy protests and the Rayamajhi Commission investigating the state’s excesses during the movement had disqualified him from holding government positions in the future.

The Supreme Court will certainly come up with a fresh decision in the context of CJ Karki-led bench calling for a review of its previous verdict to legalize the CIAA head’s appointment. But the way the anti-graft chief and head of the executive are openly bargaining to settle their past wrongdoings sends all the wrong signals. Now it is up to the sovereign parliament to decide on the legality of Karki’s appointment. They must act to maintain the integrity of the anti-corruption body and fairly investigate pending high-profile corruption cases.

Two killed as river sweeps them away

RASUWA, Aug 15: Two persons of the same family died after they were swept away by the Andherikhola stream between... Read More...