Barcelona taking all the confidence to the Canary Islands 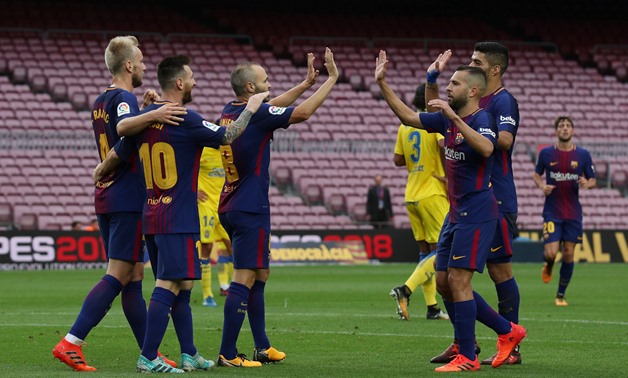 KATHMANDU, Feb 28: Win, play well. Win, poor performance. In simple words, it’s Barcelona this season. Having managed to win 20 games and draw five out of the 25, it has played this season in La Liga, the Catalan side has been perfectly inconsistent throughout the season under the new boss Ernesto Valverde.

Fresh from an impressive 6-1 win over its Catalan foil Girona on Sunday, Barcelona has been literally unpredictable in every sort. From a poor performance in a 1-1 draw against Chelsea at the Stamford Bridge on Feb 21, Barcelona, then beat the Girona side, who is now in the seventh place winning 10, drawing seven and losing nine games so far in 26 games it played in its first season in the Spanish top flight. Well, its position in the table could change as the eighth-placed Real Betis on 36 points, ninth-placed Celta Vigo and 10th placed Eibar on 35 points each, still have a game in hand.

So, Barcelona has won a staggering amount of games and hasn’t still faced a single defeat in the league or the Champions League, but the performance doesn’t exactly show how poor it has played in some of its games. Well, it has only conceded 12 goals so far, which is the second lowest in the league, one more behind second-placed Atletico Madrid, the performance is quite surprising as far as Barcelona is concerned. Barcelona has a composed and a solid play and the midfield doesn’t quite evacuate, but failing to finish some games off has been a problem for them so far. Despite all the criticisms of inconsistency, Barcelona played superbly well against Girona, who scored the first goal of the game inside the first three minutes, but Barca was 4-1 up inside the first half, and 6-1 winners when the game ended.

So, now it takes on Las Palmas at the Estadio Gran Canaria on Friday, and will host Atletico at the Camp Nou on Sunday.

Team news
Barcelona will be without its right-back Nelson Semedo as he suffered a hamstring injury against Girona, and is ruled out for up to five weeks.

So, Barcelona might field Marc-Andre ter Stegen in goal, but considering the hectic schedule from the Las Palmas clash to Malaga, which is on March 11, the Catalan side has only nine days for the three games, including the Atletico match just inside three days, so Barca might even play Jasper Cillessen in goal this time around.

Barca’s center-back role might slightly be changed in the game as Gerard Pique was substituted in the Girona clash for Thomas Vermaelen in the 64th minute and was seen in some pain, but he is included in the squad list to face Las Palmas, and either of the players might be partnered by Samuel Umtiti. On the contrary, new signing Yerry Mina didn’t make the squad list again. So, Barca might start again with Pique-Umtiti or Vermaelen-Umtiti. The right-back role will surely be consumed by Sergi Roberto, who didn’t start in the last match, but was brought in the place of Ivan Rakitic in the 77th minute and keeping in mind the injury of Semedo, while Lucas Digne will play from the left as Jordi Alba is suspended for a game.

Barca might as well start with Sergio Busquets and Rakitic in the center of the park, but Paulinho might start over either Busquets or Rakitic, and Ousmane Dembele and Philippe Coutinho in either flank, but Aleix Vidal can also feature over Dembele given the hectic fixture congestion this time.

Barca might consider playing Paco Alcacer over Luis Suarez, who scored a hattrick and assisted two goals against Girona, in light of his four yellow cards and the fifth can suspend him for the all-important Atletico game. Lionel Messi will most likely start in this game.

As for the Canary Islands’ side, four players in Emmanuel Emenike, Gabriel Penalba, Pedro Bigas are out of the contention with knee injuries, while Momo is sidelined with a calf problem.

So, Leandro Chichizola will most likely start for Las Palmas given the fact that he started in its three straight matches, while Michel and Matias Aguirregray might start given their priority in the left and the right back roles respectively. Also, Alejandro Galvez will most likely take the top priority in the center back position, but Las Palmas coach Paco Jemez might prefer David Garcia in place of Ximo Navarro.

The team might as well start with Oghenekaro Etebo in the middle of the park, along with either Vicente Gomez and Gabriel Penalba. It has flexibility for the wide midfield positions as Alen Halilovic and Nacho Gil can both play as a left midfielder, while Jairo can accommodate them too, but Gil will play in the right, if that is to happen.

The forward position might be taken by Jonathan Calleri again.

Head-to-head
Barca and Las Palmas have played nine games in the past so far, with the Catalan side winning on seven occasions and two ending in draws.

In the last five meetings between these sides, Barcelona won all the five matches.

In the 2015-16 La Liga season, Barca won the first match at the Camp Nou on September 2-1, while the corresponding fixture was a 1-2 win for Barca as well which was played in May.

In the 2016-17 La Liga season, Barca thumped Las Palmas at the Camp Nou 5-0 in January, while the corresponding encounter was a 1-4 away win for the leaders.

Recent form
Barcelona has accumulated 65 points and is at the top of the standings, leading Atletico by seven points, and both the team has a game in hand, before they encounter themselves. Barca leads its eternal rival Real Madrid by 14 points, and if Barca is to win this game, the lead will be 17. So, it has all the advantage and confidence going into the match.

On the other hand, Las Palmas is struggling in the 18th place with just five wins and will most likely be on the receiving end of this ruthless Barca side.

Lionel Messi has already scored 22 goals and assisted 12 in the league so far, so that might also give motivation to the visitors.

BARCELONA, July 30: A huge fire at a music festival in Spain forced the evacuation of over 20,000 concertgoers and incinerated... Read More...