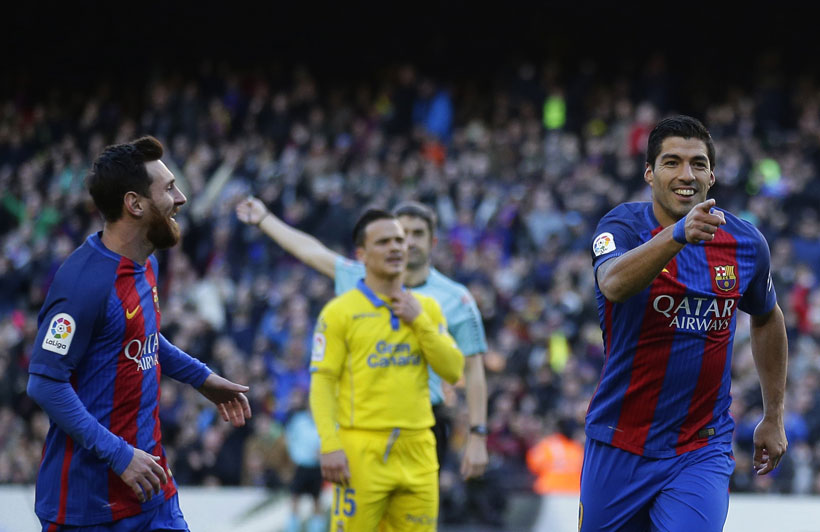 Luis Suarez added two goals and Arda Turan and Aleix Vidal also scored as Barcelona easily won at Camp Nou in its pursuit of Madrid, which plays at third-place Sevilla on Sunday. Madrid will remain with a game in hand after this weekend's matches.

After scoring free kick goals in Barcelona's three previous matches this year, Messi needed an effortless shot from close range to get on the board in the 52nd minute. Las Palmas goalkeeper Javi Varas failed to handle a left-flank cross by Rafinha and left the ball in front of the goal for an easy strike by Messi.

It was Messi's 13th goal in his last 12 matches, and his first against Las Palmas, which was the only first-division club yet to concede a goal to the playmaker. He has scored against 35 top-flight clubs in Spain, matching a mark that only Raul Gonzalez achieved while playing for Madrid.

Suarez opened the scoring from a low cross by Andre Gomes, notched his second with a well-placed shot into the far corner and, two minutes later, set up Turan after his own shot was saved following a breakaway.

"It was important to win again in the league, especially playing at home against a rival that makes things difficult for opponents," Suarez said. "We need to give ourselves a lot of credit for the work we've done to earn the three points."

Messi and Suarez are the league leading scorers with 14 each, three more than Cristiano Ronaldo.

Messi had a chance to set the new club record for most free kick goals in the third minute, but his left-foot shot sailed over the crossbar. He came closer in the 43rd, but goalkeeper Varas tipped the ball away at the top corner. Messi struck the wall in his final free kick attempt in the 78th.

"We are all fortunate to have (Messi) in La Liga, but today he hurt us," Las Palmas midfielder Roque Mesa said.

Barcelona plays at Real Sociedad on Thursday in the first leg of the Copa del Rey quarterfinals.

Las Palmas, eighth in the standings, hasn't won away from the Canary Islands since the first round at Valencia.

Midfielder Nicolas Gaitan scored early from a cross into the area to give fourth-place Atletico its third straight win in the league.

The result moved Diego Simeone's team to within six points of Madrid.

"All results matter now," Atletico midfielder Gabi Fernandez said. "We have entered a decisive stage in which we will find out whether we will finish at the top or if we will have problems. We played a great match."

Real Betis stayed in 14th place with the loss, its fourth consecutive in away matches.

Athletic, coming off elimination against Barcelona in the Copa del Rey, was held by promoted Leganes to remain seventh in the standings.

Athletic's last match was 0-0 with Alaves, another team that was in the second division last season.

Leganes, 16th on the table, came closest to scoring, while Athletic had a goal by Raul Garcia disallowed because of an alleged foul from the midfielder on a defender.

Fire breaks out in Fusre of Dharan
33 minutes ago