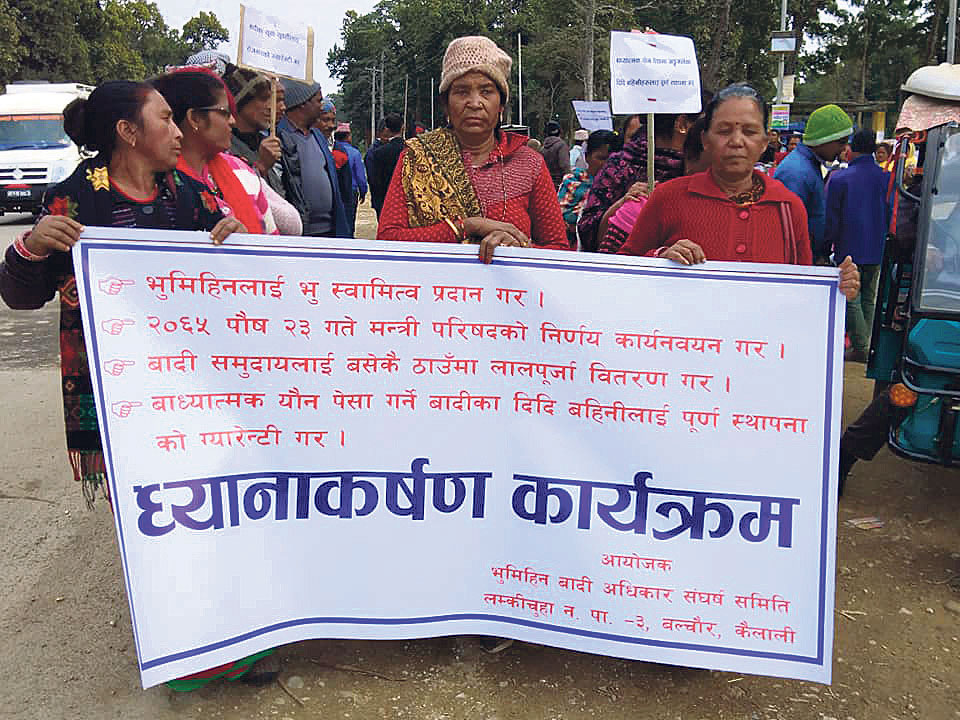 TIKAPUR, Jan 9: The Badi community has expressed serious dissatisfaction over the government's failure to implement the deals it made with them a decade ago. The government had then agreed to provide them land and take necessary measures to ensure the community's well being.

"Though we are fighting for the last 10 years, the government has not fulfilled its promises," said Uma Devi Badi, who has been leading the protests since the beginning. "In lack of opportunities, many of our women are still into the profession, they have not been able to come out of it," she added.

To draw the attention of the government over the issue, the Badi community recently organized a program in Lamki. During the program, the participants urged the government to implement the deals made with them a decade ago. The then Minister for Peace and Reconstruction, Janardan Sharma and coordinator of Badi Struggle Committee, Uma Badi herself had signed the deal.

"We had signed 26 point deal then. But the government has not implemented till now," Uma said. Extremely marginalized in the society Badi women mostly depend on sex work for their livelihood. Badi children hardly grow up knowing their father's identity. After the Badi movement led by Uma, things slightly changed for them. "We became more aware of our rights and dignity, but still, due to the lack of the government's support, many people in our community are still living a hard life," said Uma.

According to Uma, until and unless the government shows sincerity in addressing the problems faced by Badis, their lifestyle cannot change. Our right of residence, education, and health should be ensured, she stressed.

After Sharma, several other ministers also held talks with the Badis. "However, none of them showed the willingness to address the grievances of Badis," she said.

"We also talked to Ramchandra Poudel when he was serving as the Minister for Peace and Reconstruction. But our problems remain the same," Uma said.

After the right of land, offering scholarships to Badi children was among the main agendas in the following talks that were held with the government representatives. If the children were admitted to good schools and given free education, they could be free from the vicious cycle of poverty and consequently from the sex trade, Uma said. "But as we have not been able to give good choices, many girls are still into such profession."

Badi children are facing difficulty in acquiring citizenship. Though the constitution has guaranteed citizenship through the mother's name, this has not been very easy for the needy like Badis. "For Badis, the government agreed to provide it without hassle. But then, many children have not been given citizenship. When father's document is not produced, CDOs hesitate to help women and children," explained Uma.

Even though the government came up with housing scheme for Badis, it has not implemented its own plan properly as the provision necessitated that recipient produce their land ownership certificate in order to receive the housing grant. Most of the Badis do not have land registered in their name.

According to the agreement, the government was also responsible for providing vocational training to Badi women so that they don't have to rely on sex trade. However, stating that the training did not work well for them or did not help them generate earning, many women returned to their old profession. Badi women state that they found it difficult to settle in new jobs as they were not easily accepted by society. "It was not enough to just provide them the skill, they also needed a platform. In case of many women, such platform was not there," Uma said.

Requesting anonymity, a Badi woman stated that she was compelled to embrace the old profession as she was not able to earn enough through the new job. "If I could make a living by that, I would not have to continue doing this ugly job," she said. "I am not happy with what I am doing, but I could not find a way out."

Badis are found scattered in many small settlements across the western part of the country. Their population is estimated to be around 50,000.

KATHMANDU, May 31: A fresh debate on power-sharing within the ruling Nepal Communist Party has surfaced on social media platforms as... Read More...

Which services will be allowed in Kathmandu Valley from Tuesday?
17 hours ago