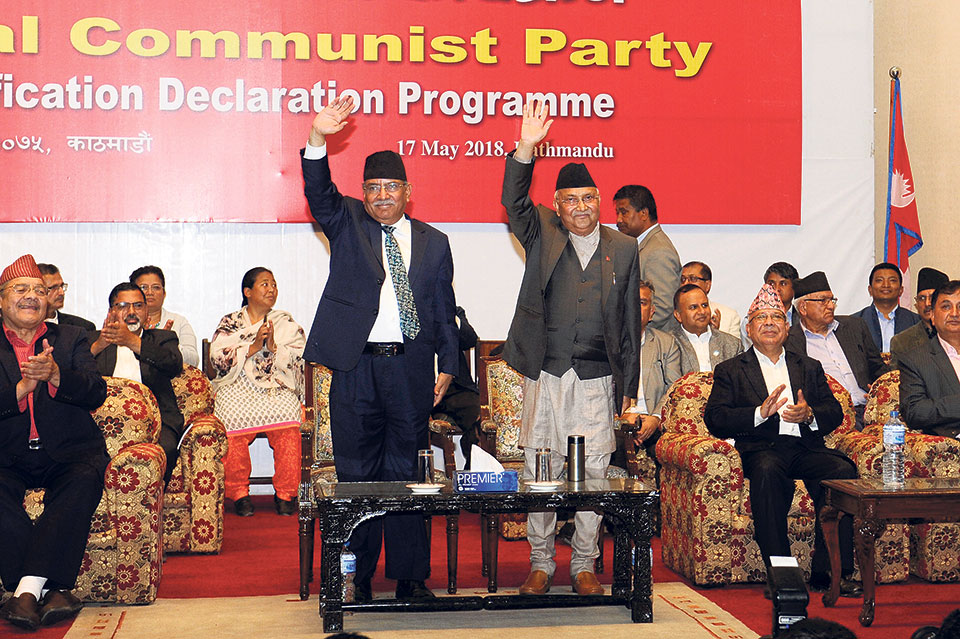 KATHMANDU, May 31: A fresh debate on power-sharing within the ruling Nepal Communist Party has surfaced on social media platforms as a section of leaders within the party circulated a five-point agreement reportedly signed before the merger of the two communist entities to form the NCP a year ago .

The agreement, which had been kept secret so far and was made public on social media to the surprise of many, states that the two chairmen “will lead the government based on equality for equal periods of time”. Along with then CPN-UML Chair KP Oli and then CPN (Maoist Center) Chair Pushpa Kamal Dahal, two other party leaders -- Bisnhu Poudel and Janardan Sharma-- who were closely involved in coordination between the two party chiefs, signed the agreement.

Dahal, one of the co-chairs of the ruling party, said in a television interview that he and Oli had reached a clear understanding on heading the party and government on an alternating basis and that they have been firm in this understanding. He indicated that he was confident in getting the prime ministership or party leadership once Oli completes half the present five-year term in government. The former Maoist chief indicated letting Oli continue to lead the government if his [Dahal's] leadership in the party is ensured through the upcoming party general convention.

The public airing of the agreement and Dahal's interview have taken place simultaneously at a time when the Oli government has been described as failing to make progress as expected, given its two-thirds majority in parliament.

Political observers see the development within the NCP as a move to mount pressure on Oli as his government completes nearly one-and-half years and the party's upcoming general convention remains uncertain even as the party unification process appears to be nearing completion from the top down to lower-level committees across the country.

The five-point agreement was reached between the two erstwhile UML and Maoist parties during the process of their unification. According to insiders, the 'secret agreement' was made public by Maoist leaders.

Both party leaders and political analysts say the agreement was leaked to put pressure on Oli to come up with a clear stance—whether to hand over government leadership to Dahal after the completion of half of the government's term or ensure the position of party chairman for Dahal through the upcoming general convention.

Point number one of the five-point agreement states that “the issues related to party leadership and organization will be decided through consensus and understanding and not based on majority or minority.”

The erstwhile Maoist side apparently wants the matter spelled out and settled because all the committees in the unified party have been constituted on the basis of 60 percent for the former UML and 40 percent for former Maoists.

Analysts describe the disclosure of the secret agreement as a pressure tactic by Dahal to hold Oli accountable to their agreement .

Dahal's move also comes at a time when the Oli government is under sustained flak for trying to throttle the press and media.

“It seems Dahal is worried that Oli will breach agreement once again as he has already deceived before. Oli is not one to quit power easily,” said Shyam Shrestha, a political analyst who was nominated by the Maoists as a lawmaker in the second Constituent Assembly. He was referring to the time when Dahal had to quit the UML-Maoist alliance led by Oli and join the Nepali Congress to become prime minister for a second time in 2016. At the time, Dahal had accused Oli of not handing over power to him as per their understanding .

Arguing that the merger of the two parties to form the NCP was mainly guided by the aim of gaining numerical strength in the election in 2017 rather than by any ideology affinity, Shrestha said differences could emerge among the top leaders if opportunities aren't shared equally.