Badala Barilai wins millions of hearts; Saput says he wants to be a superhit

KATHMANDU, Aug 7: Prakash Saput wanted someone 'who would look like a rapist by appearance' to play a lead role in his project – Badala Barilai. He would however question himself whether rapists or potential rapists look any different from normal people. His quest to find a suitable actor for the story song forced him to try different ways, including a rapid google search. 'Top ten villains of Nepal' he typed and scrolled. He went through the suggestions, one by one. He found Dhruba Koirala, a theatre and movie actor, impressive!

"Keki Adhikari was my first preference for the female lead role. I’d look for options if she had turned down the offer. But I struggled to find a villain," smiled Saput, who is happy to see Badala Barilai a superhit in just four days of release. "I worked on the project for a year."

Saput wanted to bring out a hit song for last year's Teej festival. He could not meet the deadline. He had been brainstorming since then to come up with a song to make it for this year's Teej. But his team thought that releasing this song anytime of the year would work. "We released the song four days ago, we had completed the shooting just a week before," Saput informed.

Why rape as the issue for this song?

Saput says Badala Barilai is a “traditional melodious folk song based on folk tales”. Through the video, he wanted to send message against sexual assault. He thinks that the society should be awake about rape. And if the story song is delivered with due seriousness and sensitivity, perhaps he could sensitize many.

How does he manage to bring about one after other superhit songs? Bola Maya, released in May 2018, has been viewed over 16 million times on Youtube. Many of his songs are on social issues. Is he a social activist? Saput laughed.

Prakash Saput, a native of Baglung, has his own shares of a painful life story: a life of constant struggles—his father spent over five decades abroad, and a manpower office in Kathmandu once deemed  unqualified for a work in Malaysia. Somewhere inside, he carries that aspect, and harbors thirst to change the society.

However, the main drive for whatever he does is his craze to be superhit, he quipped.

"If I do only songs, and only a few sections of people will be attracted. Rest will be left out. I have a fire in me. I want to reach millions, I want to be a superhit,"he laughed. "That is why I used to think a lot about how to make my work liked by the masses. And I realized that you should tell a story, social story in a moving way, so that everyone feels connected," he added.

After he told the secret behind his motivation, he was however quick to note that he may not always be able to afford to produce songs out of his passion; commercial success counts and people's love and Youtube's rating alone do not pay well.

"It's only through stage shows that the artists earn money these days. There's pain," he smiled. It cost Saput a million rupees to produce Badala Barilai. According to him, all the artists were very supportive of the project as they were deeply moved by its theme. Everyone was overwhelmed.

On the sixth day of the song’s release on Youtube, 125K have liked it and more than two million have watched the video. Some have commented by saying that they watched the video repeatedly and remarked it as ‘one of the best videos they’ve ever seen’. Viewers have appreciated the lyrics, vocal, concept, acting and the overall package. Nancy Nancy writes that "Being a girl, I can feel the pain. The song should be nominated for an Oscar. This is the best Nepali song I have ever listened to," she further writes. While millions have fallen in love with this 15-minute-long video song, a few have however questioned the concept of a ghost.

Saput has received countless messages from people, especially young girls and women. He shared a moving handnote received from a girl on his Facebook wall. “I am writing this to you at 3:44AM at night, and have been listening to this song on loop, tears rolling down my eyes,” wrote Bhawana Pandeya. 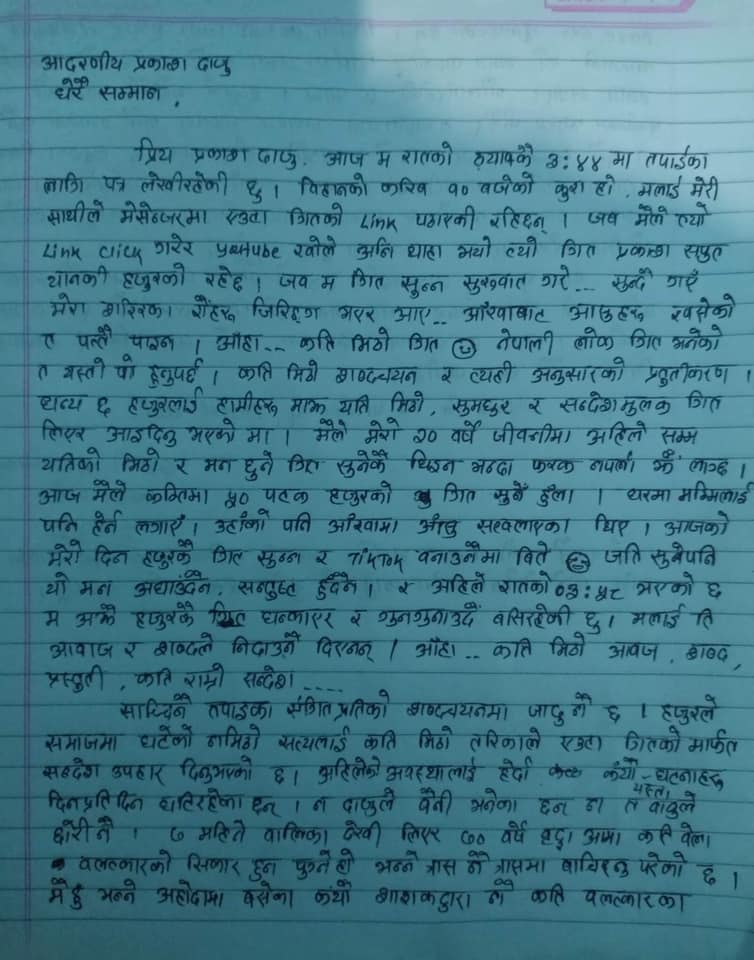 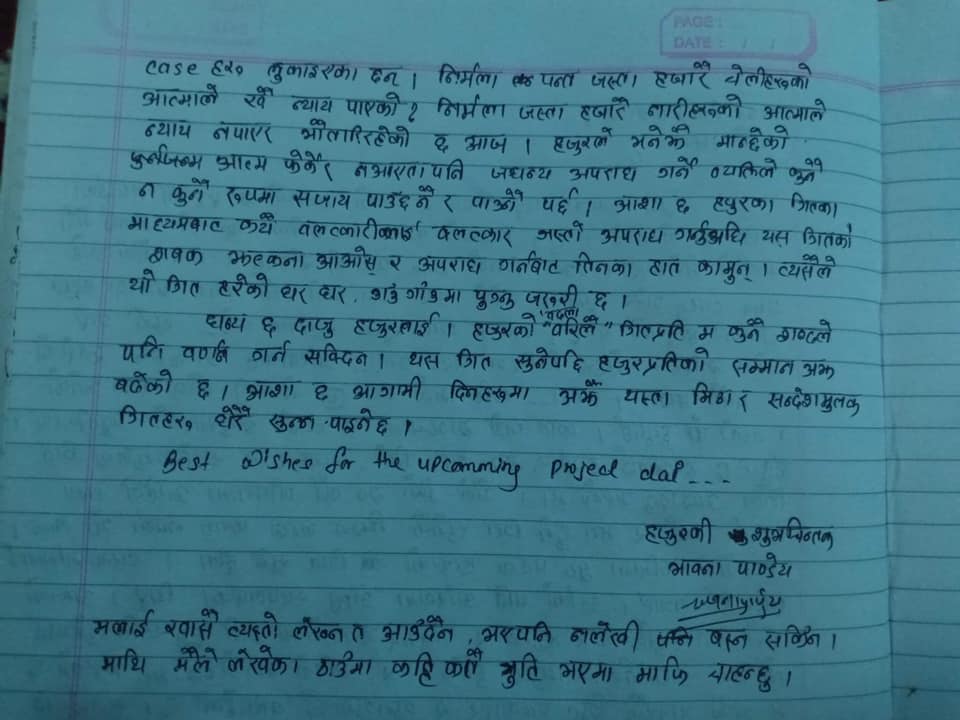 The story begins with a scene where a wife tries to stop her husband from leaving home at night in a motorbike. She does not want him to go out at night, and talks of ghosts in the jungle. The husband (rapist, played by Dhruba Koirala) scolds his wife for not giving birth to a son, while their two small daughters feel intimidated. He then leaves home. He gives a ride to a girl covered in a scarf. In a meek voice, the pillion rider asks if she could sing a song? Devi Gharti, who has given vocal to the lyrics and music of Saput then does the magic. Kahani shuru garu maile kaha baata, bari lai bhanna pani laaj laagchha (Where do I start my story; I feel ashamed even to narrate).

As the motorbike and the two have threaded into the jungle, we see flashbacks of the story. The rider and the pillion rider actually had a connection, though the former was unaware about it. Keki Adhikari is the aspiring singer who gives a great performance on stage, where Dhruba, supposedly chief guest, makes sexual advances. Soon, he traps the girl, rapes, kills and hangs her in a tree. Keki and Dhruba's roles are backed by the powerful singing of Devi, and the chorus gives goosebumps. When the song stops and the rider turns back with an intention to make her another prey, he doesn't see anyone. Astonished, he looks around only to see Keki a little further. The one whom he had hung and left dead is right in front of him. This leaves him numb. Soon, he's hung by her in the same tree branch.

"I was aware that people might question the ghost element. But that’s symbolic of the law of karma. If you do something bad, that is bound to come back to you," explained Saput, adding that he has narrated his no-confirmity about ghosts and afterlife at the end of the video.

Saput pondered over, reviewed, tossed around for months over the song’s lyrics, script and the concept. He had enough time to do so -- between the interval of two Teej festivals. After he had a clear idea of the kind of song and the video, it just took a few more days to complete the project. "After recording the song, everything was done swiftly. However, this coronavirus interrupted us," he said. "I think anything done with passion pays, though not always in terms of money.”