Asian shares tumble after Dow has worst day since 2011 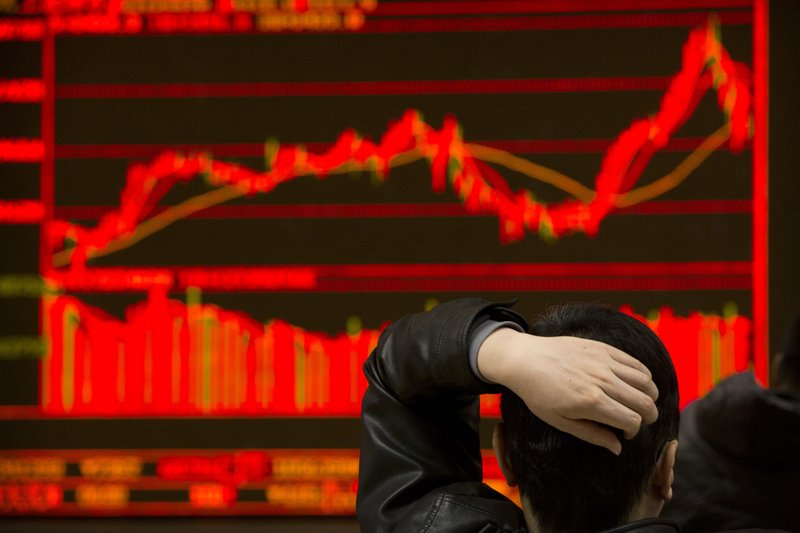 An investor monitors stock prices at a brokerage house in Beijing, Tuesday, Feb. 6, 2018. Shares tumbled in Asia on Tuesday after a wild day for U.S. markets that resulted in the biggest drop in the Dow Jones industrial average in six and a half years. (AP Photo/Mark Schiefelbein)

TOKYO, Feb 6: Asian markets were rattled Tuesday by the miseries on Wall Street, with Japan’s Nikkei 225 index briefly dipping more than 7 percent, but investors seemed to be taking the gyrations in stride.

The Tokyo benchmark bounced throughout the day, closing 4.7 percent lower at 21,610.24.

All regional bourses were battered a day after the Dow Jones industrial average suffered its worst percentage decline since August 2011 and its biggest point drop ever. The Shanghai Composite index fell 3.4 percent to 3,370.65 and Hong Kong’s Hang Seng skidded 4.4 percent to 30,827.73.

Two days of steep losses erased the U.S. market’s gains from the start of this year, ending a spate of record-setting calm for stocks in a pullback that market pros have been predicting for some time.

Declines of 10 percent or more are common during bull markets. There hasn’t been one in two years, and by many measures stocks have been looking expensive.

The same is true of many global markets, where investors have been bracing for a correction while hoping not to see one.

“There would be few places to hide from the risk-off atmosphere that is expected to extend its stay in Asian markets today in a significant manner,” Jingyi Pan of IG said in a commentary. “This is fear rolling over itself,” she said.

Panic in other markets can send investors racing for the “safe haven” of Japanese yen holdings, she noted. That is painful for Japanese and other regional export manufacturers, whose competitiveness is hurt by stronger currencies that push their prices relatively higher.

“The economy has had record high corporate earnings and improving wages and labor conditions. Consumer spending is also recovering and so the Japanese economy is stable,” said Toshimitsu Motegi, the economy minister. “As for market movements, I will watch closely for any impact on the economy.”

At its lowest ebb during Monday’s roller-coaster trading on Wall Street, the Dow was down 1,597 points from Friday’s close. That came during a 15-minute stretch where the 30-stock index lost 700 points and then gained them back.

The Dow finished down 4.6 percent at 24,345.75. The Standard & Poor’s 500 index, the benchmark most professional investors and many index funds use, sank 4.1 percent, to 2,648.94. That was its biggest loss since August 2011, when stocks were reeling as investors fretted over European government debt and the U.S. credit rating was downgraded after the debt ceiling impasse.

Investors have sold shares out of concern that with inflation creeping higher, the Federal Reserve might raise interest rates more quickly, making it more expensive for people and businesses to borrow money and derailing the economic expansion and the prolonged share price rally.

Monday’s drop was bad, but there were worse days during the financial crisis, including a 777-point plunge in the Dow in September 2008 that was equivalent to 7 percent, far bigger than Monday’s decline.

A 10 percent drop from a peak is referred to on Wall Street as a “correction.” The last such decline came in early 2016, when oil prices were plunging as investors worried that slowing global growth might sharply reduce demand. U.S. crude hit a low of about $26 a barrel in February of that year.

On Tuesday, oil prices were steady. Benchmark U.S. crude fell 56 cents to $63.59 per barrel in electronic trading on the New York Mercantile Exchange. On Monday, it gave up $1.30 to $64.15 per barrel. Brent crude, which is used to price international oils, shed 62 cents to $67.00 per barrel.

The highest bond yields in years are making bonds more appealing to investors compared with stocks. Bond prices jumped after a steep decline on Friday.

On Tuesday, the yield on the 10-year Treasury slipped to 2.73 percent from 2.84 percent. Lower interest rates hurt banks because they cannot charge as much money for mortgages and other types of loans.