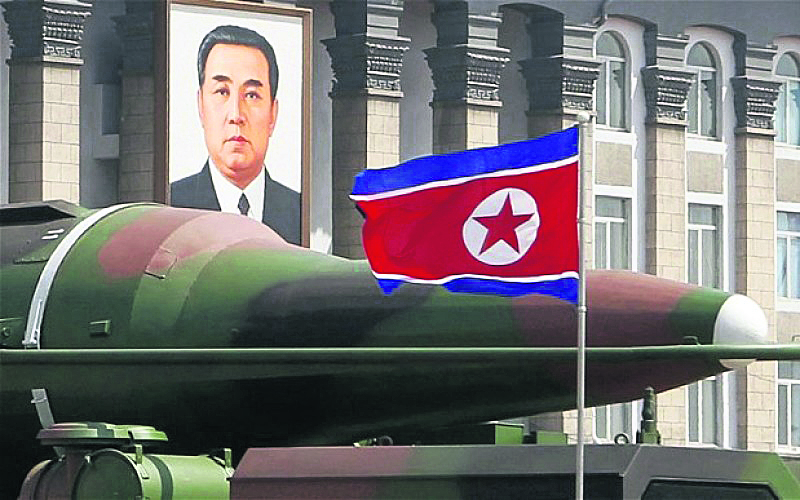 TOKYO: It is too soon to know whether and how the challenge posed by North Korea’s nuclear and missile programs will be resolved. But it is not too early to consider what that challenge could mean for a part of the world that has in many ways defied history.

The moniker “Asian Miracle” goes some way toward conveying just how extraordinary the last half-century of economic growth in many Asian countries has been. The first economy to take off was Japan, which, despite a slowdown in recent decades and a relatively small population, remains the world’s third-largest economy.

China’s ascent began a bit later, but is no less impressive: the country achieved over three decades of double-digit average GDP growth, making it the world’s second-largest economy today. India, soon to be the world’s most populous country, has lately been experiencing an impressive 7-8 percent annual rate of GDP growth. And the ten members of the Association of Southeast Asian Nations averaged some 5 percent growth in recent years.

But contemporary Asia’s economic miracle rests on a less-discussed strategic miracle: the maintenance of peace and order. Since the end of the Vietnam War in the mid-1970s, Asia has stood out for its lack of major conflicts within or across borders—an achievement that distinguishes it from Africa, Europe, the Middle East, and even Latin America.

This stability is all the more extraordinary because Asia is home to a large number of unresolved disputes. When World War II ended in 1945, Japan and Russia did not sign a peace treaty, owing largely to their competing claims over the Southern Kuril Islands, known in Japan as the Northern Territories. Eight years later, the Korean War also ended without a formal peace treaty, leaving behind a divided and heavily armed peninsula.

Despite all of these tensions, Asia has remained largely at peace, partly because no country has wanted to jeopardize economic growth by initiating a conflict. This perspective is most clearly associated with Deng Xiaoping. In leading China’s process of economic “reform and opening-up” from the late 1970s to the early 1990s, Deng explicitly emphasized the importance of a stable external environment to facilitate internal economic development. The reliance on regional trade ties to support growth and employment has provided yet another incentive to sustain peace.

But economics was probably not the only factor at play. Because most Asian countries are host to relatively homogenous societies with strong national identities, the chance of civil conflicts erupting and spilling over national borders is relatively low. Last but certainly not least, America’s strong military presence in Asia—which underpins its robust regional alliance system—has reduced the need for Asian countries to develop large military programs of their own, and has reinforced a status quo that discourages armed adventurism.

These factors have contributed to peace and stability in Asia, but they cannot be taken for granted. Indeed, they are now coming under increasing pressure—putting the strategic miracle that has facilitated Asia’s economic miracle in jeopardy.

What changed? For one thing, China’s economic rise has allowed it to expand its military capabilities. As China adopts an increasingly assertive foreign policy—exemplified by its border dispute with India and territorial claims in the South China Sea—other countries are increasingly motivated to boost their own military spending. As that happens, it becomes more likely that a disagreement or incident will escalate into a conflict.

Meanwhile, the US—the only power with the capability to offset China—seems to be retreating from its traditional role in Asia. Already, US President Donald Trump’s administration has withdrawn his country from the Trans-Pacific Partnership, and confronted US allies on their defense spending and persistent trade imbalances. More generally, the growing unpredictability of US foreign policy could weaken deterrence and prompt allies to take their security into their own hands.

The most immediate cause of potential instability is North Korea, which now poses not just a conventional military threat to South Korea, but also a nuclear threat to all of Asia, as well as to the US. This could invite a devastating preemptive strike from the US. But, if the US refrains from military action, the results could also be catastrophic, if the North actually does strike. Even just the threat of such a strike could be destabilizing, if it drives concerned US allies such as South Korea and Japan to increase their military spending and reconsider their non-nuclear postures.
Should any of these scenarios come to pass, the consequences would be far-reaching. Beyond the human costs, they would threaten the economic prosperity of not only Asia, but the entire world. A conflict between the US and China, in particular, could poison the single most important bilateral relationship of the twenty-first century.

The good news is that none of this is inevitable. There is still time for governments to embrace restraint, explore diplomacy, and reconsider policies that threaten to undermine stability. Unfortunately, we are living in a time of rising nationalism and at times irresponsible leadership. Add to that inadequate regional political-military arrangements, and it is not at all certain that wisdom will triumph over recklessness, or that Asia’s unique decades-long peace will endure.

The author is President of the Council on Foreign Relations © 2017, Project Syndicate

How Asia can survive Trump