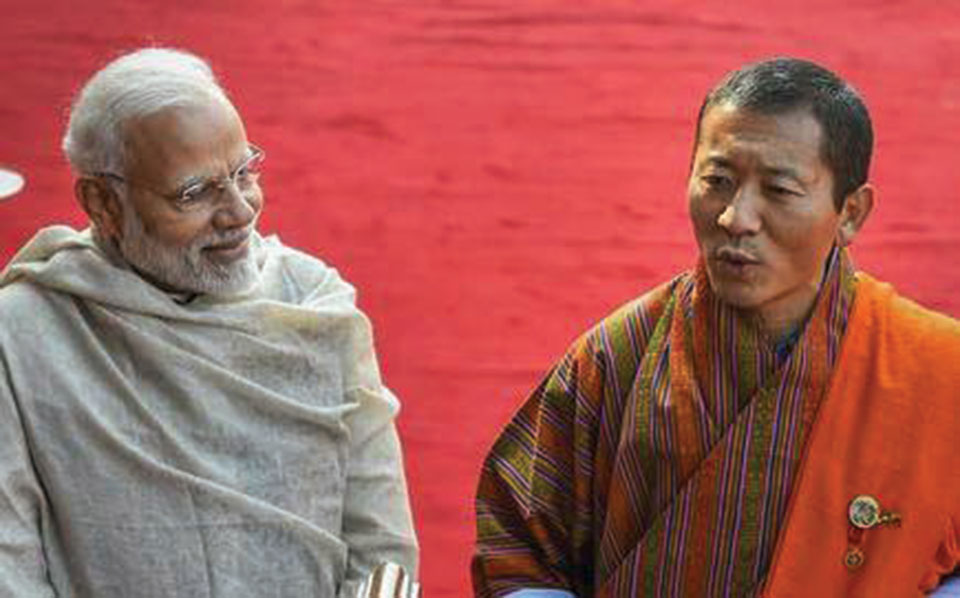 Modi could raise plight of the Bhutanese refugees in Nepal and elsewhere. Taking its own people back home would raise Bhutan’s Happiness index

Indian Prime Minister Narendra Modi will visit Bhutan on August 17-18 to boost the traditionally close consensual ties, to reiterate his government’s emphasis on the ‘neighborhood first’ policy, and to highlight bilateral cooperation between the two nations. Last month, External Affairs Minister S Jaishankar made a two-day official visit to Bhutan in his first overseas trip after assuming charge of his ministry. According to The Hindustan Times, Jaishankar’s trip prepared the groundwork for Modi’s visit, which will largely focus on issues ranging from assistance for Bhutan’s economic development plan to cooperation in hydropower.

In early 1990, on a grand design, the king of Bhutan evicted one-sixth of the small Buddhist country’s population mostly of Nepali origin popularly known as Lhotsampas. The Drukpas, the ruling elites and the Hindu Lhotshampas had peacefully coexisted until 1989, when the king introduced his “One Nation, One People” policy. The measure required all Bhutanese to accept mainstream Drukpa social norms that dictated ‘how one should eat, dress and even talk’. However, as times rolled by, this dictum on the part of the King and his cohorts became largely intolerable mostly to the Southerners which subsequently led to a mass exodus of more than 102,000 citizens from their homeland. In the ensuing melee and thereafter, the evicted population leaving behind their fate, fled via India and ultimately sought asylum in the eastern part of Nepal. Since then, some 15 rounds of bilateral talks between Nepal and Bhutan have been held but they all failed miserably to resolve the long-pending issue.

Thus, having resigned to their fate as refugees for over two decades and seeing a continual upshot on exiles impasse, the UNHCR (United Nations High Commission for Refugees) and IOM (International Organization for Migration) stepped forward and offered resettlement. Today, 112,000 of the displaced Bhutanese have finally been resettled by the eight developed countries. While the larger chunk—more than 102,000—have made their way to the United States, the remaining 10,000 have found refuge in other countries. Despite this considerable resettlement, 6,500 refugees are still languishing in camps in Nepal, desperately looking for ways to return to their homeland, Bhutan.

Bhutan has been central to India’s two major policies—the ‘Neighborhood First Policy’ and ‘Act-East Policy’. According to the treaty signed between India and Bhutan on August 8, 1949, the Government of Bhutan agrees to be guided by the advice of the Government of India in regard to its external relations. This treaty was later revised. The swotted treaty formed the basis for the beginning of renewed relations between the India and Bhutan. These two countries have always shared a unique and organic relationship which is often termed as a ‘sacred bond’, largely sustained by regular high-level visits and dialogues between the neighbors.

Both countries have mutual interests in diverse areas of cooperation—security, border management, trade, hydropower and many more. Besides, Bhutan was also the first country Modi visited during his first stint as premier of India. Soon thereafter, Bhutan responded with the same reciprocity. In the last election in Bhutan, Prime Minister Lotey Tshering chose India for his first overseas visit obviously in an attempt to boost the ties between the two nations.

India and Bhutan share a time-tested relationship. It is a perfect example of friendship and cordiality in South Asia. As the world’s largest democracy, India can guide Bhutan in developing requisite democratic infrastructure and a political establishment that can sustain the demands of a democratic society. PM Modi on his call on Bhutan could utter a word on the plight of the Bhutanese refugees to recoup Bhutan from its dark side. Bhutan’s recipe on the Gross Happiness Index is a unique philosophy that guided the entire country. However, if it is to remain loyal to this very principle, it has to timely focus attention on its long-evicted citizens. After all, taking its own people back after a long separation could also mean relevance and a rise in Bhutan’s Happiness index. Above all, the total solution for Bhutanese refugee crisis lies at burden-sharing among the nations involved.  And India is a part of it.

The author, a former refugee from Bhutan, is now a US citizen currently serving on the Youth Services Advisory Board to Mayor’s Office in New Hampshire, US