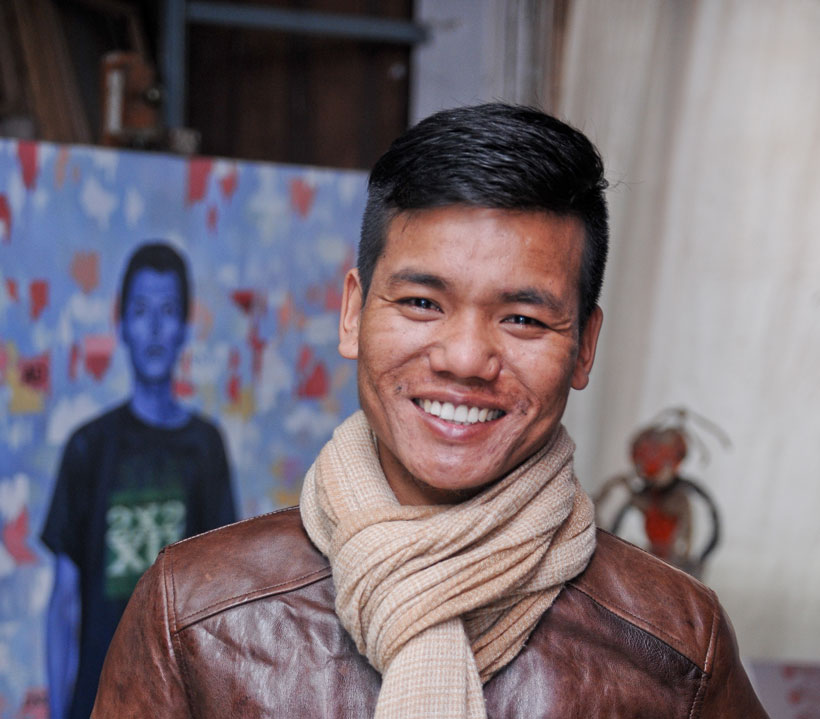 An artist of political and social conscience, Hit Man Gurung believes in growing as an individual and thus works to better himself through his art. Art for him is a practice that doesn’t have a definite shape. He says, “Art is the reflection of reality which may or may not be accepted by people. As an artist, I present the multiple reality of society through my discovery and try to understand it through my expression.”

His art depicts the effects of an incident in the time and space he is bound by. His art is all about sharing and interconnecting with people through which he tries to relate with their feelings in its abstraction.

Significance of social and political conscience in art
Art and human civilization began together. Art has been a part of society from the very beginning of civilization. Art is a self-expression of the social reflection and my creation is a part of the society where I was born and raised. Politics affects everything and everyone and it serves as an important tool for artists to highlight the reality and to express their feelings. Yet, whether the political condition is at its best or at its worst, art has always flourished. The significance of social and political conscience in art is an inseparable component for the existence of art itself.

Preceding the practice
The search for the concept is the foremost task in art as I try to show and portray reality through factual and emotional truth. Medium plays a supportive role in educating and depicting the concept, hence the appropriate medium – whether it be photography, painting, installation, performance or videography – is selected. With respect to the medium, materials are collected. In the piece titled Every Day at the Airport, I waited six months for a coffin box from Saudi to be used for the installation art. I have seen three to five coffins with dead workers from the Middle East, contributing to 30% of remittance of the country, arrive each day. The medium and its materials reflect the dark reality of our country that sparks a powerful emotional involvement with the viewer.

Bridging the gap
I studied at a government fine art college and the course of study was not updated. I always felt a swelling sense of gap between what was being taught in class and how art was being interpreted in the modern context. The idea of art was realized through paintings as if it were the only medium. My art is all about emotional relations and I want my audience to emotionally connect with one another through my hard work. For that, I wanted to explore different mediums and learn through different experiences. As I believe that the medium of art has no boundaries, I took to educating myself outside the classroom as well. Now I’m more satisfied when I’m trying new things and the risk uplifts me from the monotony of limitation.

Work in progress
My migration series that I started working on in 2012 is still in progress. As it is a sensitive issue, it needs a lot of research and that needs time. The research helps in excavating the multiple layer of reality of people who have their own identities. It is a collective effort of collecting different materials by meeting different people and developing ideas by sharing it with others. I don’t really like working with a fixed idea in mind. I need the flexibility to flow and express. It takes time for the piece as a visual language to be expressive and that is the biggest challenge. The series is forever ongoing and it’s not the final product but the progress over time that matters here. I don’t want my art to be limited to mere products. They should also be a representation of my progress of growth as an individual.

Visually documenting the present for the future
Every civilization’s art captures the triumphs and tragedies of its people. I want my art pieces to be references for people to understand the lifestyle, achievements, and struggles of the eras gone by. Our museums don’t preserve human history but the history of artifacts only and that’s really sad. My present work will also serve as strong visual references for people trying to understand history and its significance by witnessing the lifestyle and culture of different communities. I believe visual documentation can inspire the new generation to think creatively, and work towards progress by learning from the past.

The Seventh National Fine Art Exhibition organized by Nepal Academy of Fine Arts has been shown from June 19 –... Read More...