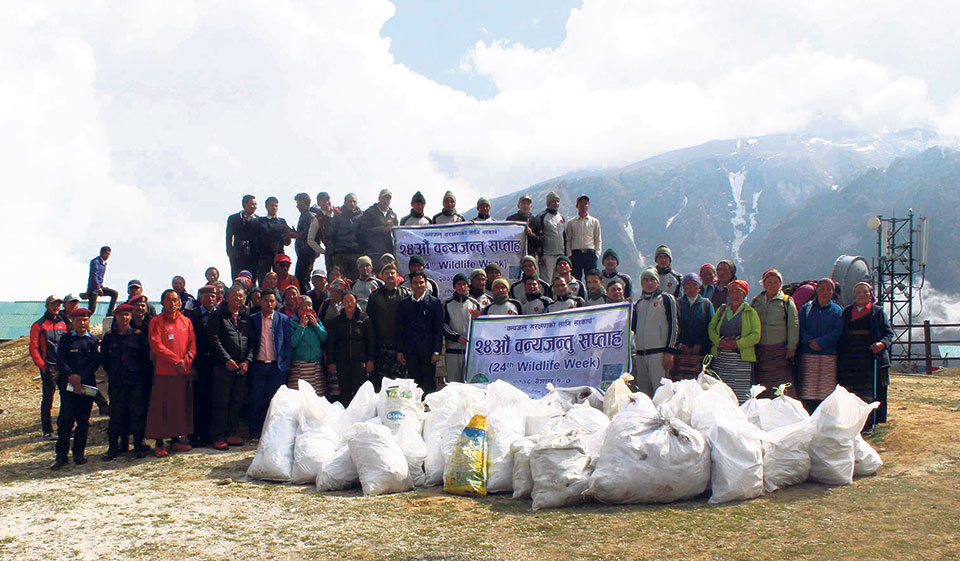 Members of the Sagarmatha cleanup campaign, which was organized as part of the 24th Wildlife Week, pose with the bags of waste collected from Mt Everest at Namche Bazaar earlier this week. Photo Courtesy: Nepal Army

The cleanup campaign was conducted as part of the Wildlife Week organized by the Sagarmatha National Park Office.

According to the NA, the cleanup campaign was started from April 14, 2019 in coordination with various governmental and non-governmental organizations. Earlier, the NA had also flown 2.5 tons of logistical supplies needed for the campaign to Namche from Kathmandu by helicopters.

After the on-site cleanup campaign was concluded, the army lifted a ton of non bio-degradable wastes by army helicopters to Kathmandu and handed the waste to Blue Waste to Value Company. The remaining one ton of the waste has been flown to the NA barraks in Okhaldhunga for treatment, according to a statement issued by the army.

The army in the statement also pledged to provide necessary manpower and machines necessary for the Clean Mountains Campaign which will be run till May 19. The Nepal Army has been involving itself in such campaigns as per the army chief's directives for the current fiscal year.

China to provide Rs 2.4 billion in military assistance to Nepal

Nepal exported electricity worth Rs 1.72 billion to India in June, average price per unit stood at Rs 9.67
14 hours ago

President Bhandari emphasizes on role of law education for promotion of rule of law
10 hours ago
Rs 10,000 fine slapped on Rajpur's mayor for not providing information
10 hours ago

100 sacs of fertilizer meant for Rolpa ‘vanish’ in Dang!
11 hours ago

Three new cases of cholera reported in Kathmandu
12 hours ago