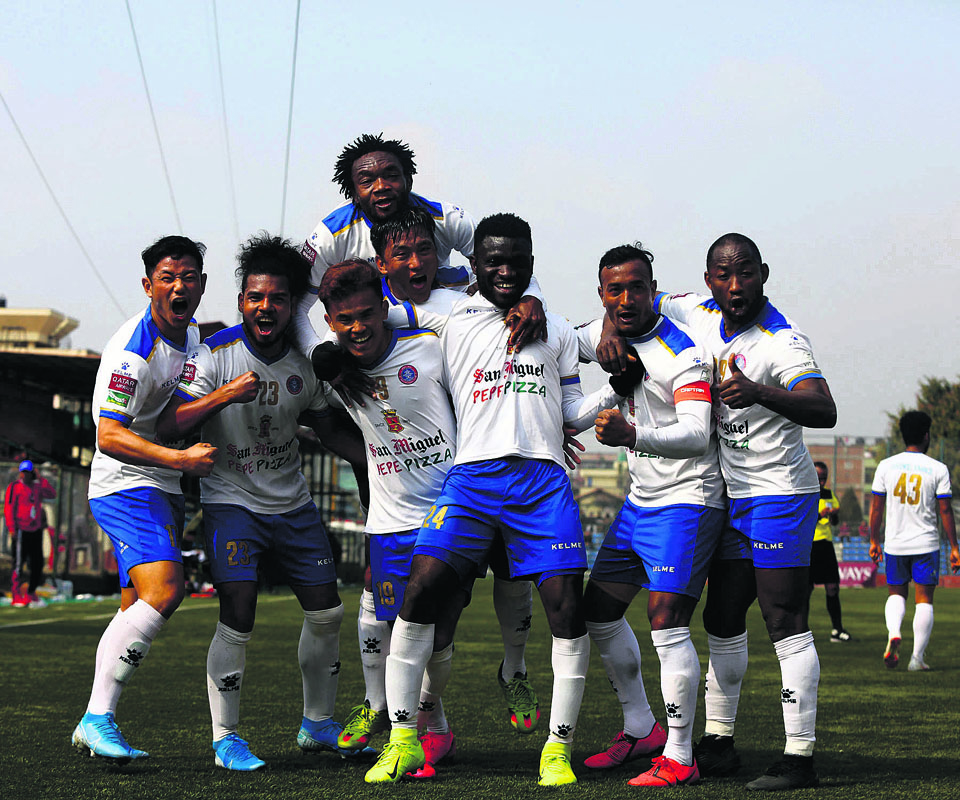 Army defeated the other departmental team APF 2-1 to stay intact at the top of the table, while Machhindra thrashed the bottom-placed Saraswati 6-1 to not let Army run away with the lead with both the teams having two matches left to play.

The race for the first A-Division title for both the teams is getting even more exciting as they will take on each other in the final match of the league.

With the wins, Army is already seven points clear of third-placed Manang, who has three games left to play, while Machhindra is six points ahead of the defending champion.

In the late-kick off of the day played at the All Nepal Football Association (ANFA) Complex in Satdobato, a brace from Santosh Tamang ensured a vital win for Army even after APF equalized in the first half.

This is the second time Army has won three matches on the trot beating difficult challengers Jawalakhel Youth Club 1-0 and Nepal Police Club 4-2, and now APF. It achieved the same feat from the third round as it saw off Himalayan Sherpa Club and Three Star Club 2-0 each, while it defeated Saraswati 1-0.

Army was thoroughly dominating in the contest with clinical shots on target with better passage of plays taking advantage of another APF defensive collapse, which has been the case of its apparent downfall in the league this season.

Army won a penalty two minutes later as Bharat Khawash was fouled by Ramesh Dangal. Tamang stood up to take the spot kick, but was saved by APF keeper Raju Yogi. However, the rebound fell to Tamang and he converted the second time for the first goal of the match.

Army was very comfortable with the ball as it spread the possession smoothly with quick passing and attacking play. APF could not deal with it, and chose to stay back and defend.

APF got a chance in the 27th minute as Aashish Lama hit a shot from outside the box, but it was brilliantly saved by a commanding Bikesh Kuthu. Ravi Lopchan had a glorious chance two minutes later, but his volleyed effort just went off target.

Army got back to back chances in the game as Tamang’s right-footed shot in the 32nd minute went wide, followed by a cross from Khawash to Karkiu, whose header hit the post a minute later.  Likewise, Tanka Basnet hit a shot from outside the box, but APF keeper Yogi saved it in the 34th minute.

Despite all the chances from Army, it was APF who scored next. Dangal redeemed for his mistake for the penalty and produced a headed assist to

Lama as his right-footed shot hit the top corner in the 37th minute.

But, APF could not hold on to its equalizer as it conceded just four minutes from time.

Tamang hit a bolter as his shot from outside the box went straight into the top right corner in the 42nd minute to restore Army’s advantage.

The second half was pretty much more of the same with Army dominating the game in entirety. APF could not convert the few chances it got and Army won the match.

With the win, Army is top and has 26 points which includes eight wins, two draws and a loss. Likewise, APF sits second from bottom with five points and has a win, two draws and eight losses.

In the early game, Machhindra scored five goals in the second half which consisted two injury time goals and a Dipak Rai brace as the team completely swept away a simple Saraswati challenge.  Machhindra clearly dominated the game as it hit 21 shots among which seven were on target, while Saraswati had just one target which was its only goal of the game.

Devendra Tamang scored his second goal of the season as he hit a powerful header to convert a brilliant corner from Ranjit Dhimal in the 40th minute.

The second half was totally devastating for Saraswati. It conceded five goals and there was no way for the team to stop a quick back to back Machhindra attack.

Dipak scored his first of the game as he rounded off Saraswati keeper brilliantly after getting a pass from Bijay Dhimal in the 54th minute. Bishal Rai (A) made it three for the team in the 59th minute.

Dipak completed his brace as he converted in a pass from Yogesh Rai in the 77th minute.

Kazeem Adegoke Busari got one back for Saraswati in the 87th minute converting in a penalty after Peter Segun controlled the ball with his hand.

Somide Oluwawunmi Adelaja and Andres Tia Tchounkue scored in the fourth and the fifth minute of injury time to score the fifth and sixth for the team respectively.

With the win, Machhindra sits second with 25 points with eight wins, two draws and a loss. Likewise, Saraswati is bottom with four points from a win, a draw and nine losses.