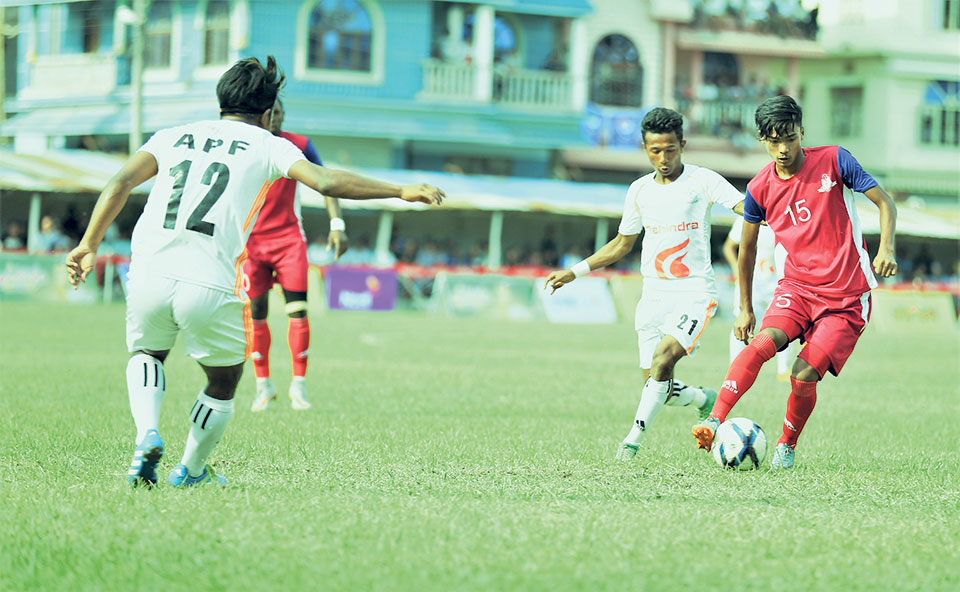 Players of Armed Police Force (white) and Madan Bhandari Sports Academy in action during a quarterfinal match in the Damak Gold Cup football tournament in Damak on Friday.

DAMAK, May 5: The departmental team Armed Police Force has advanced into the semifinals of the first Damak Gold Cup football tournament with a 3-1 win over Madan Bhandari Sports Academy in the first quarterfinal match on Friday.

Hari Karki gave Armed Police a lead in the 10th minute as he converted a rebound which came back off the post, but Madan Bhandari replied instantly through African player Ilon in the 18th minute of the match. He scored after Armed Police goalkeeper Raju Nagarkoti could not secure the ball. Karki scored his second in the 27th minute to make the score 2-1 with a solo effort. Karki bagged his hattrick in the injury time to secure the departmental team’s win.

Armed Police was limited to 10 players in the first half as Aaditya Chaudhary was shown a red card in the 20th minute.

Madan Bhandari got plenty of good chances to score in the match, but Armed Police stood strong to dominate the losing team. Another African player Abba’s 37th minute strike went just wide.
Armed Police’s Karki was named the man-of-the-match and was rewarded with Rs 11,000.

Damak XI will take on the other departmental team Tribhuvan Army Club in the second quarterfinal match. Damak had reached the last eight defeating Rupandehi XI, while Army got a direct entry to the tournament.