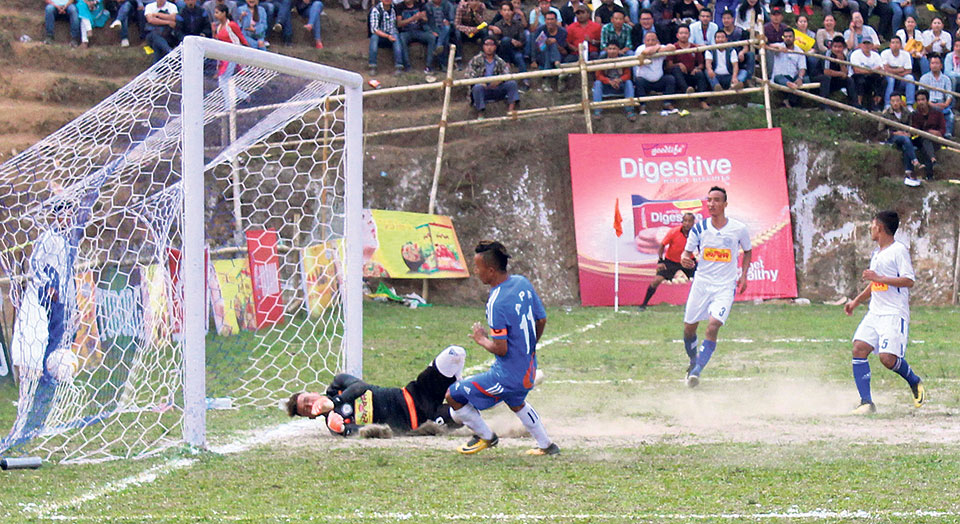 After the first half ended in a goalless draw, Nabin Lama gave Armed Police a lead in the 54th minute as he scored from near the danger area. But Armed Police could not protect its lead for much longer as Jhapa equalized inside two minutes through Bhushan Subba. Subba scored a beautiful goal from near the post converting a long pass.

Armed Police’s Yuvraj Khadka scored his team’s second goal in the 65th minute as he utilized a pass from Lama to upset Jhapa.

Armed Police also got some chances in both the halves as Shyam Nepali’s header was out of the frame of the goal in the first half.

Armed Police captain Nabin Lama was named the man-of-the-match and was rewarded a cash prize of Rs 10,000.

Armed Police has become successful in taking revenge against Jhapa as the departmental side had lost in the second edition of the tournament 2-0. Jhapa also had defeated Armed Police 1-0 in the semifinals of the third edition.

DAMAK, May 5: The departmental team Armed Police Force has advanced into the semifinals of the first Damak Gold Cup football... Read More...