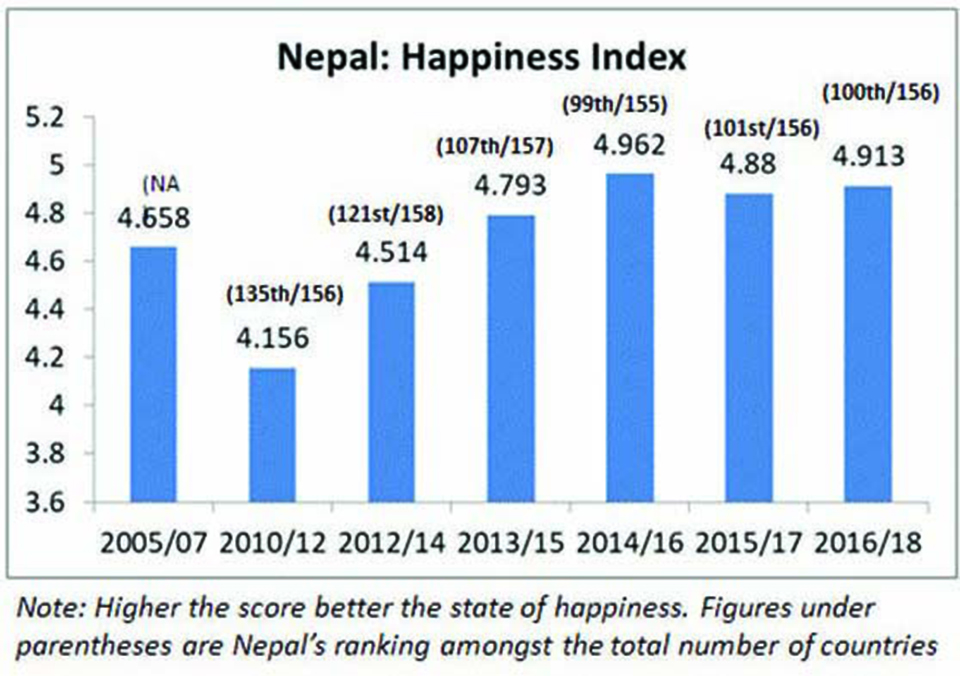 It is reported that the government using the Central Bureau of Statistics (CBS) is organizing a national survey on measuring the level of happiness of Nepali people. What could be happier news than this? After all, the government of K P Sharma Oli government came up with a vision of ‘Prosperous Nepal and Happy Nepali’ a year ago. Having bluffed so much with the first part (remember, railways, waterways, gas lines and double-digit growth) indeed it is time to do something on the second part. However, the question remains: Will prosperous Nepal make happy Nepali or will happy Nepali make prosperous Nepal? It could be a chicken-egg problem.

Since 2012, Prof Jeffrey Sachs from Columbia University, along with colleagues, has been helping to draft World Happiness Reports. The latest version of the reports (WHR 2019) gives information related to the state of happiness in 156 countries of the world, including their rank order and basic components of Eudemonia or human well-being.

Human happiness and wellbeing are subjective concepts. How do you measure? According to Prof Sachs, there are two kinds of measures—affective and evaluative measures. The affective measures ask questions like “are you happy?” or “how do you feel?” The answers to these questions measure emotional wellbeing. These are very subjective and change with the change in the context. On the other hand, there are evaluative measures that ask the respondents where they stand on a scale measuring happiness. Developed by psychologist Hadley Cantril (1906-1969), the respondents are asked to place themselves on a Cantril Ladder of Happiness, measuring lowest rung of zero (worst scenario) to a highest rung of 10 (best fulfilment of life). In 2016-18, with a score of 7.769, Finland stood at the happiest country in the world and, with a score of 2.853, South Sudan stood at the bottom rung of the Cantril Ladder. At the top rung we find all the Scandinavian countries and at the bottom mostly African countries. The rich countries, especially oil rich countries, do not fare well on wellbeing index. Economic growth is not related to human happiness.

The chart in this article presents Nepal’s scores on Cantril Ladder for various periods of time. The information was collected from the past world happiness reports. With a score of 4.913 in 2016-18, we are somewhere at the midpoint of the Cantril Ladder. In terms of global ranking we are at the 100th position among the list of 156 countries. In South Asia, surprisingly, Pakistan ranks at 67th position with a score of 5.653. Bhutan, another country much hyped for Gross National Happiness, ranked at 95th position with a score of 5.082. Nepal is ahead of Bangladesh (125th), Sri Lanka (130th) and India (140th).

With a score of 4.9 or say 5, out of 10, our situation looks like half-full half-empty paradox. The difference between 10 and country’s score is called dystopia, opposite of utopia. Bosnia and Herzegovina with a median score of 5.386, we have an Everest to climb on happiness scale.

One other way to look into the state of well-being of Nepali people is to look at the trend values. Are we moving fast or slow? After a sharp drop in 2010-12, Nepal’s happiness score is gradually rising. The drop in 2015-17 can be ascribed to April earthquake plus subsequent political events. Why Nepal became unhappy in 2010-12? I leave the matter to the readers.

Leo Tolstoy is quoted as saying all happy families are happy because of a similar reason and all unhappy families are unhappy because of dissimilar reasons. In the Cantril Ladder we have six factors that go into the computation of a composite measure of happiness. These included: per capita GDP, social support, healthy life expectancy, freedom to make life choices, generosity, and perception of corruption. Decomposition of happiness index provides our current sources of happiness.

The primary sources of happiness come from social support (we have good family support system), healthy life expectancy (our health is improving) and per capita GDP (so is our income). The least contributing sources of happiness are generosity and perception of (less) corruption. In 2016, Nepal ranked favourably on World Giving Index published by Charities Aid Foundation based in UK. The reason behind was April earthquake. During national crisis people tend to be generous. However, in the happiness index we have turned out to be mean.

The Oli Government’s oft-repeated statement on zero tolerance against corruption is having an insignificant impact on wellbeing and happiness of Nepali people. Definitely, PM Oli will be shocked, if in the proposed survey, the source of Nepali people’s unhappiness turns out to be corruption. In the next issue, I will try to answer the question: Is Nepal a peaceful country?

For our temptation for career and financial gain abroad, are we not ruining the quality of life of our parents? Read More...