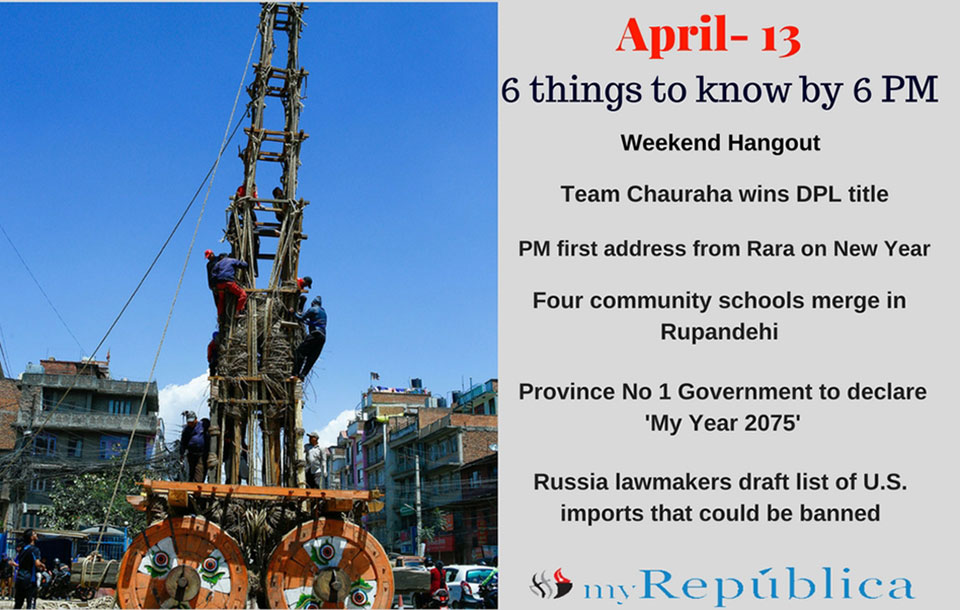 Weekend Hangout
Every Friday and Saturday, we look into venues around the city to find a suitable place to hang around with our friends and loved ones.

Dhangadhi Team Chauraha has won the second Dhangadhi Premier League title along with a cash prize of Rs 2. 5 million by defeating Kathmandu Goldens in the final match on Friday.

Prime Minister KP Sharma Oli has scheduled to his first address for Nepali New Year 2075 from Rara on the name of public. For this PM Oli, today headed for Rara from Kathmandu.

Four community schools in Tilottama municipality of Rupandehi district have gone for integration. Amending the recommendations of Municipal Education Committee, the 18th meeting of municipal executive took the decision to integrate four community schools to be effective from new educational calendar.

Province No 1 Government to declare 'My Year 2075'

Province No. 1 is to conduct an awareness campaign for the promotion of health in the province around the slogan, 'Responsible for Health, Basis for Prosperity.'  The campaign announced by the Ministry of Social Development is called 'My Year 2075 BS'. This campaign is a part of the national programme of the federal government.

Russia’s lower house of parliament is to consider draft legislation that would give the Kremlin powers to ban or restrict a list of U.S. imports, reacting to new U.S. sanctions on a group of Russian tycoons and officials.