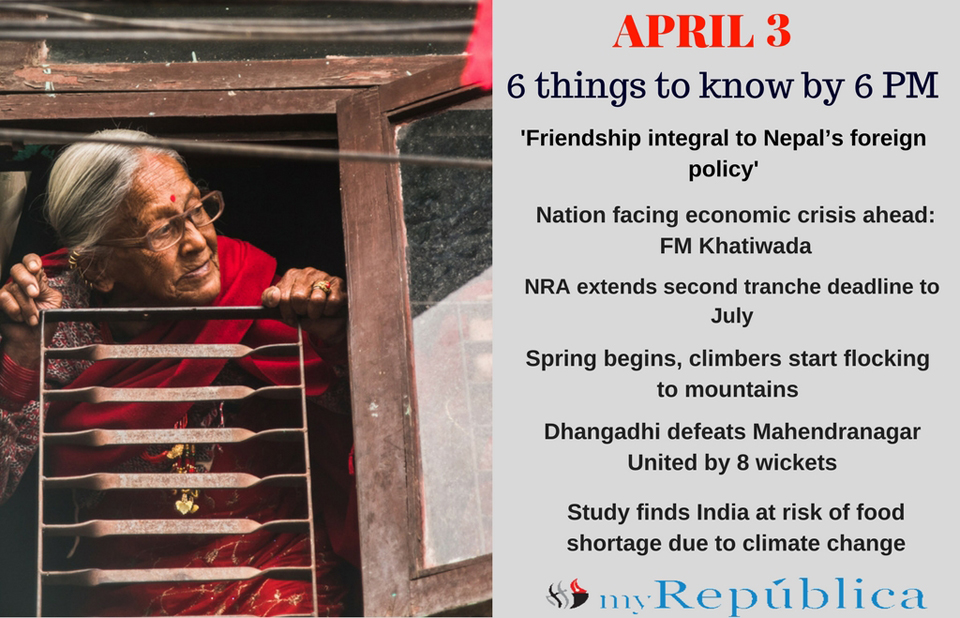 Prime Minister KP Sharma Oli shared that a basic principle that guided Nepal’s foreign policy with its neighbors was 'friendship' that was based on equality and mutual interest, including adherence to international treaties that the country is part of.

Finance Minister Yubaraj Khatiwada has hinted that the nation is facing a critical phase in near future. Speaking at a House meeting on Tuesday, Minister Khatiwada said that the nation’s treasury cannot be assessed simply through a single digit but the entire economic and development indicators should be taken into consideration while judging the position of our country's economy, referring to the white paper issued earlier.

The deadline of the second tranche of grant distribution for earthquake victims has been extended till mid-July. The 12th meeting of the National Reconstruction Authority (NRA) Directive Committee held on Tuesday decided to extend the deadlines upon knowing many earthquake victims were yet to receive the amount to rebuild their homes. Before the extension, the deadline to handover second tranche amount was mid-April.

With the onset of spring season, the most favourable season for mountain climbing in Nepal, mountaineers have started flocking to the mountains including Sagarmatha, the world's highest peak. The Department of Tourism said that a total of 23 teams till Monday have been granted permission for the expedition to various peaks including the Sagarmatha (Mt Everest), Makalu, Kanchenjunga, Lhotse and Amadablam. Among the 23 expedition teams, 15 have got permission to ascend Mt Everest.

India is among the countries which are at the greatest risk of food insecurity due to weather extremes caused by climate change, a global study suggests. Researchers led by the University of Exeter in the UK examined how climate change could affect the vulnerability of different countries to food insecurity — when people lack access to a sufficient quantity of affordable, nutritious food.