All eyes on Neymar at men's Olympic 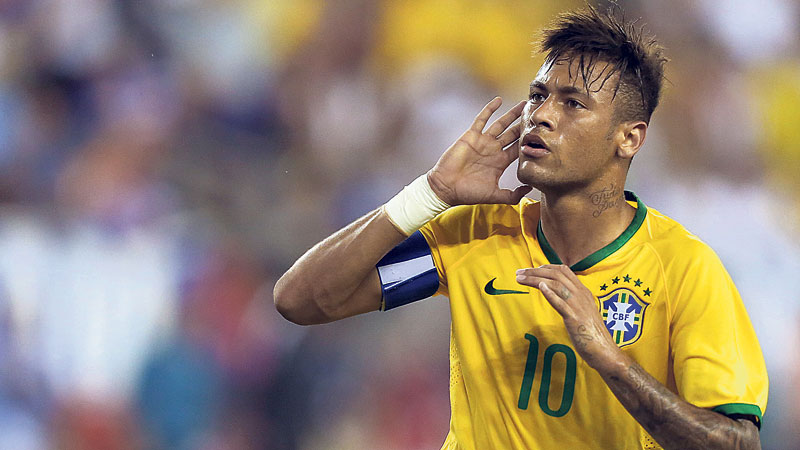 SAO PAULO, July 18: The last time Brazil played a major soccer tournament at home, Neymar was stretchered off the field and then missed an embarrassing loss against Germany in the 2014 World Cup semifinals.

Two years later, the Barcelona star looks to rebound from that disappointment at the Olympics in Rio de Janeiro.

Although the Olympic soccer tournament doesn't have the same importance of a World Cup, the Rio Games have a special meaning for the Brazilian striker. Neymar will be one of the games' biggest stars and will carry the responsibility of leading the five-time world champions to their first soccer gold medal.

"It's a unique opportunity," he said. "Not only for me, but for everyone on the team. We know how important this medal is."

All eyes will be on the 24-year-old striker, who opted to play in the Olympics instead of the Copa America earlier this year. Brazil was eliminated in the group stage of that tournament, a result that prompted the firing of coach Dunga.

Because it's not an official FIFA tournament, teams are not required to release players for the Olympic tournament, but Neymar and the Brazilian soccer confederation negotiated with Barcelona so he could play in Rio.

"I know that this gold medal has eluded Brazil so far, and we will do everything to try to win it," Neymar told Brazilian television recently. "It's rare that a country like Brazil, considered the land of football, still hasn't won this gold."

It will be the second time Neymar will play for Brazil at the Olympics. He led the team that lost the 2012 final to Mexico in London, where the Brazilians were the heavy favorites. Brazil was runner-up twice before, in 1984 and 1988. It also won the bronze in 1996 and 2008, the last time with a squad that featured Ronaldinho and future stars like Marcelo and Thiago Silva.

"Neymar is special, one of the best players in the world," said Rogerio Micale, who replaced Dunga as coach of the Olympic team. "Any team can benefit from a player like him. He will mean a lot to us. I think that he will be able to lead the youngsters in the squad."

Neymar will be one of the three over-23 players each nation is allowed to add to its roster. The other two are 38-year-old Palmeiras goalkeeper Fernando Prass and 28-year-old Beijing Guoan midfielder Renato Augusto, who have far less international experience than Neymar.

No other player will attract as much attention — from fans, media and opposing teams — as Neymar.

"I'm honored to be in this team, because I know how difficult it is to win an Olympic medal in any sport," he said. "With football it's even more difficult because if you are not the champion, people see it differently."

Neymar is facing extra pressure after Dunga was fired for the second time from the national team. Without the experienced coach by his side, Neymar will carry the fate of the team, and the striker can become a national hero if he wins the gold, or join a long list of stars — Romario, Rivaldo, Ronaldo, Ronaldinho, among others — who have failed in the pursuit of the gold.

"I never run away from the responsibility. I'm used to it," Neymar said. "We have another great opportunity to win an Olympic medal, and hopefully this time it will be the gold."

Neymar also had a prominent role at the World Cup in Brazil two years ago, when he played up to expectations until breaking a bone in his back in the quarterfinals against Colombia and missing the rest of the tournament. Brazil eventually was eliminated after an embarrassing 7-1 loss to Germany in the semifinals.

"I don't compare tournaments. I just like winning every tournament that I play," Neymar said. "All of them are important for me. Each has its own history, its own characteristic, but they are all important."

Brazil had a favorable draw and will face South Africa, Iraq and Denmark in Group A, making its debut Aug. 4 against South Africa in Brasilia. In the quarterfinals, the hosts could face Colombia or Nigeria, two youth powerhouses.

The final will be played Aug. 20 at Maracana Stadium in Rio.

Many players to watch outside US in Olympic men's basketball