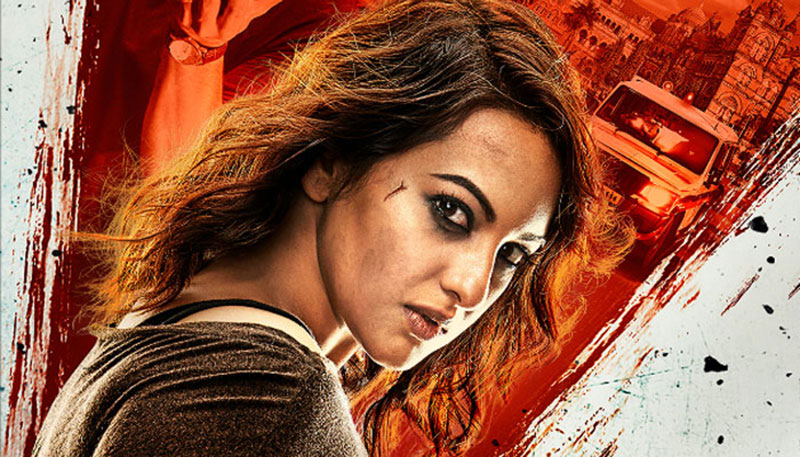 MUMBAI, Sept 2: Director A R Murugadoss pulls out the stops for Sonakshi Sinha. The actress, on her part, goes the whole hog as an action star.

But Akira falters frequently because the film's screenplay lacks the punch that could elevate the crime drama to the level of a genuine boundary pusher.

Akira does break a major stereotype by placing a woman at the centre of the action, which revolves around four policemen who are desperate to cover their tracks after committing a heinous crime, but it adds nothing more to that welcome narrative twist.

Director-turned-actor Anurag Kashyap plays the principal antagonist an assistant commissioner of police who is worse than a mafia don with an impressive degree of flair.

Operating unhindered, the ACP and three of his colleagues cross all limits of propriety: they kill a car accident victim when they find a stash of cash in the boot of the mangled sedan.

A college student Akira Sharma (Sonakshi Sinha), a Jodhpur girl new to Mumbai, gets drawn into the vortex of the case as a chain of events triggered by a surreptitiously shot video and the thefts of a kleptomaniac literally ends at the door of her hostel room.

That marks the beginning of a cat-and-mouse game between Akira and the four rogue cops who will do anything to avoid detection.

But the female protagonist of Akira is no damsel in distress. Adept at martial arts and no mean fighter, she overpowers men double her size without breaking a sweat.

The stage is thus set for a violent confrontation between Akira and the policemen and the audience naturally expects scenes of explosive action.

But that does not quite happen despite several action sequences. The film takes a detour through a mental asylum where the girl ends up, a victim of the machinations of a psychiatrist and the marauding policemen.

Apart from the two principal characters who face off against each other, the film has an upright, heavily pregnant policewoman (Konkona Sen Sharma), who takes it upon herself to get to the bottom of the case.

For Sonakshi Sinha, Akira is a significant point of departure. Her career has thus far hung by the coattails of the likes of Salman Khan, Akshay Kumar and Ajay Devgn.

This film had the potential to catapult her into an all new league. But given the rather low-intensity drama that moves only in fits and starts, Akira seems unlikely to set the box office on fire and give Sonakshi's leaner and meaner screen persona a longish lease of life. And that's a pity.

There's a sense of foreboding in the opening titles of Aniruddha Roy Chowdhury's "Pink", as the camera follows two sets... Read More...