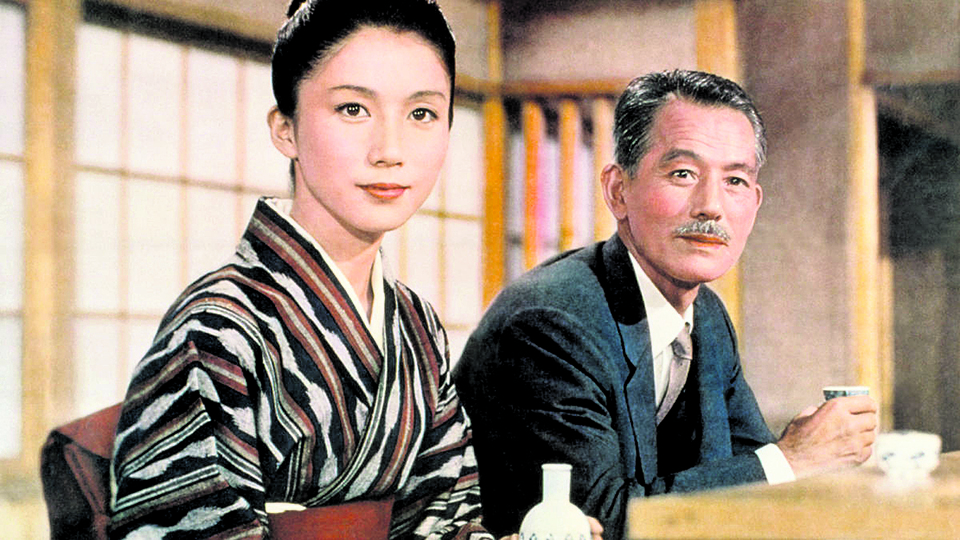 Three middle-aged men sit at a typical Japanese restaurant sipping hot sake. One of them has taken a young wife and the other two mock him for it. In any other film, this scene would be loud and have a lot of movement.

However, it is ever so gently played out by the actors and the director and there is a ‘stillness’ that hovers over it as well as the rest of the film.

Like most Yasujirō Ozu films, An Autumn Afternoon is a film about family. The protagonist, Shuhei Hirayama, is a former navy captain and a high-post factory employee, living with his daughter and a younger son, after the death of his wife. Most of the time, he is with his school friends and colleagues drinking rather than going home early. It seems as though he has a curtailed relationship with his children, limited to only greetings and money. This is extremely well executed by Chishū Ryū, who has appeared in most of Ozu’s films, as we can see that he is pleasant with people around him yet he seems distant and disconnected, reacting to most things with a gentle “umm”.

The film starts on a light note. A friend of Hirayama reminds him that his daughter is of age and he should find her a marriage prospect, so she can enjoy her life, rather than just taking care of her brother and her aging father. Hirayama, at first, rebuffs this advice, saying she is not yet ready. But as the film plays out, he is convinced that due to his need, his daughter might end up an unhappy spinster. This change in attitude comes about especially after he meets his former teacher’s daughter who has aged and become unpleasant after several years of taking care of her father and is tired of her father’s constant drinking.

French critics Michel Ciment and Georges Perec described the film by saying, “It’s what is happening when nothing is going on.” And that makes complete sense. There is so sudden tragedy that befalls any character, not a moment of physical violence occurs in the films, shots are mostly indoors and the people who move about in the film are out of touch with one another, all in their own quiet world. However, its slow yet subtle pace still had me hooked to the film as I wanted to find out how the story would progress.

The thing that I noticed almost immediately as the film began was how the camera work was different than any other film I had seen before. Rather than showing two people conversing with each other in a long shot, or angle it in a way that feels like one character is looking at another. The characters were placed directly in the middle of the camera and if one of them was talking, it showed only that particular person, in a meticulous and soothingly symmetrical close up. This made it seem like I was right in the middle of the these two characters, turning my head left and right with every word spoken by the characters.

Another thing, I noticed was the ‘out-of-touch’ feel that the characters exuded. Scenes that would have a strong emotional feel in most films, like a wedding scene with a father and a daughter, a conversation between a husband and wife behind closed doors, all seemed to brush past that pull of emotion. It was fascinating to see how Ozu played out the characters, as it was the opposite of what I’ve seen in my own life, as people around me are loud – they scream, yell and are full of words. This made me wonder if this was a common trait in the Japanese culture or just Ozu’s perception of this one particular family.

The symmetry in almost every shot of the film was really comforting. You could take a screenshot of any shot in the film and it would go perfectly well on an aesthetic yet slightly ‘dark’ Instagram – that’s how meticulous each scene was. The background was mostly a faded blue or brown and it thus exuded a somber feel. However, there was almost always a ‘pop’ of color somewhere in the shot, be it a bright green soup bowl or a red-colored painting in the background. I have yet to figure out if this has any significance in the story, but there was a spot of red in almost every scene, standing out in the pale background. The transitions between scenes featured the glory of Tokyo, from the buildings to the sky, accompanied by powerful ‘orchestra’ pieces, modulating your emotions as it played over the scenes.

The film concludes with a point it made all along – it’s about loneliness. For example, the teacher murmurs when drunk, “I’m lonely and sad” and “My sadness ruined her life” (referring to his daughter who didn’t marry to take care of him). This is why Hirayama, as well as the other characters, seem to be by themselves even when they are around people. Ozu’s message is simple. We are born. We live. Nothing truly happens in our lives. And all this time, even though we attach ourselves to people, we are always within ourselves, alone.

This revelation hit me especially hard when Ozu ended the film by showing shots of empty rooms and staircases in Hirayama’s home accompanied by the contrasting cheerful music. I was left with an empty feeling as I turned off the computer screen.

There's a sense of foreboding in the opening titles of Aniruddha Roy Chowdhury's "Pink", as the camera follows two sets... Read More...

Tourism at all time low in tourist destinations
18 hours ago