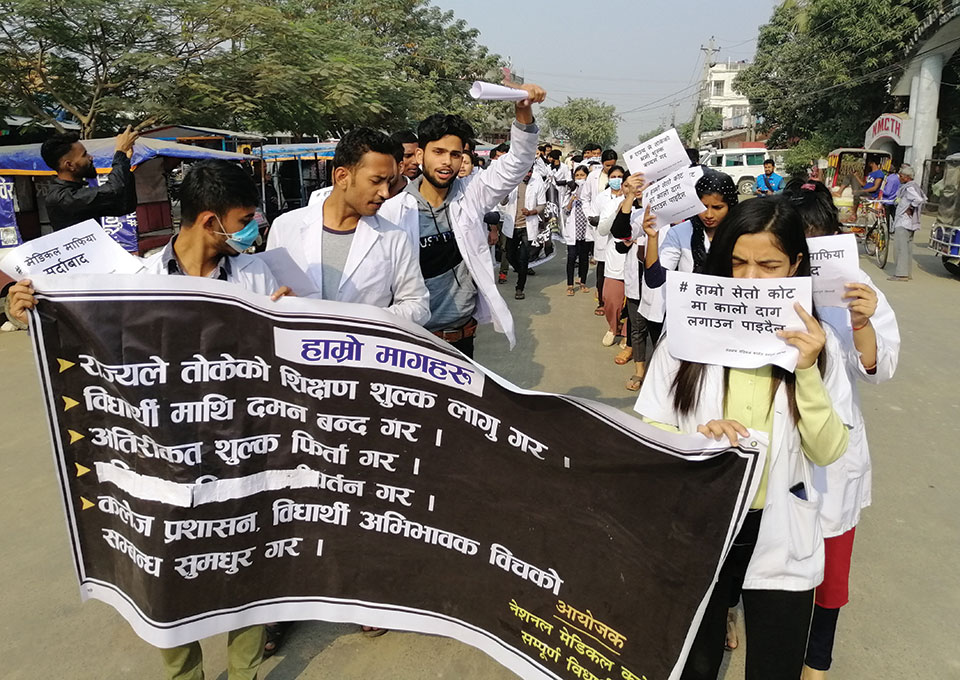 BIRGUNJ, Nov 24: The students of the Birgunj-based National Medical College (NMC) staged protests on Saturday, after some senior students manhandled the agitating students protesting against the exorbitantly high fees charged by the college administration.

The situation at NMC was tense on Friday evening, after the senior students – close to the college administration – manhandled the agitaging protesters – first year MBBS students. The students staged protest in front of NMC’s entrance, and they also submitted a memorandum to the chief district officer (CDO) Narayan Prasad Bhattarai.

The students claim that the college has been charging additional fees to the students apart from the fee set by Tribhuvan University.

“After the first year students started the protests, the annual examination has become uncertain. After the senior students asked about the protest, the dispute started between the two groups,” said Basruddin Ansari, managing director of NMC, adding that the administration is ready to follow the directions of the Ministry of Education.

“The students are not ready for discussions and meeting,”he said, adding that the students are provoked. He also claimed that the media has not presented the real story of NMC.

As per the existing laws, medical colleges outside the Kathmandu Valley can charge only Rs 4.2 million per student annually, but NMC has been charging the students an additional Rs 1.2 million under various headings.

The medical students say that NMC has forced the MBBS students to pay an additional Rs 1.2 million under different headings such as library charge, sports fee, internet, CDP charge, among other things.

A few weeks ago, the government had given a 15-day ultimatum to the medical colleges to return the additional fees they have charged the students.

Whether our protests are peaceful depends on government response: Mahato