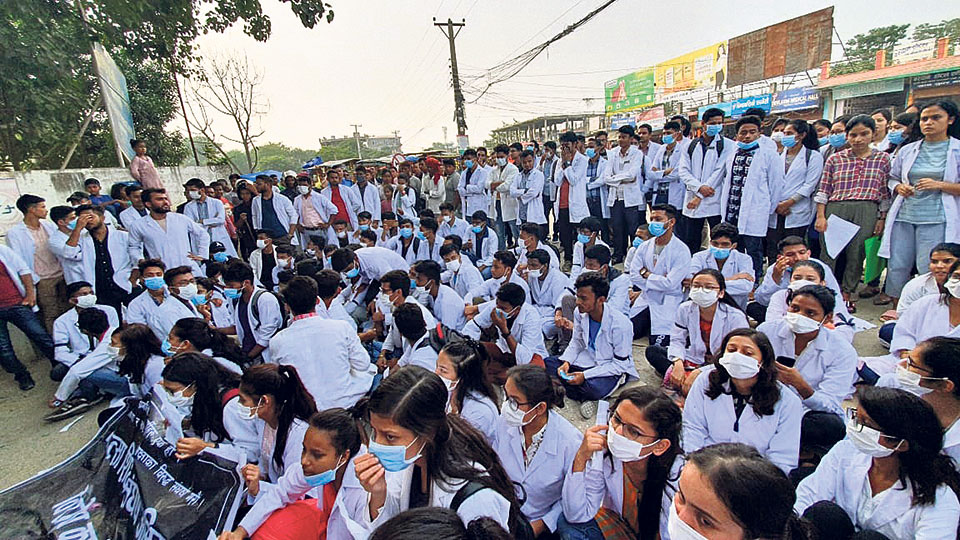 BHAIRAHAWA, Nov 3: Students of the Bhairahawa-based Universal College of Medical Sciences have started protests, demanding that the college return the additional fees it charged them.

The medical students started the protests on Thursday, against the exorbitantly high fees charged by the college against the fees set by the Tribhuvan University (TU). Last month, the government had directed the medical colleges under TU to return the additional fees charged to the students, but the colleges have been reluctant to return the amount, according to the students.

Apart from staging protest, intern doctors are also wearing a black armband as a symbol of protest. Students say medical colleges are charging an additional Rs 1 million. Likewise, medical colleges are also charging Rs 10,000 as examination fee, instead of Rs 2,500 set by the government. Students also said intern doctors are getting a paycheck of Rs 9,000 – half the amount set by the Institute of Medicine (IOM) – from the college administration.

Meanwhile, Khadga Bahadur Khatri, spokesperson for the District Administration Office, claimed that the security forces have not used force on medical students of the college.