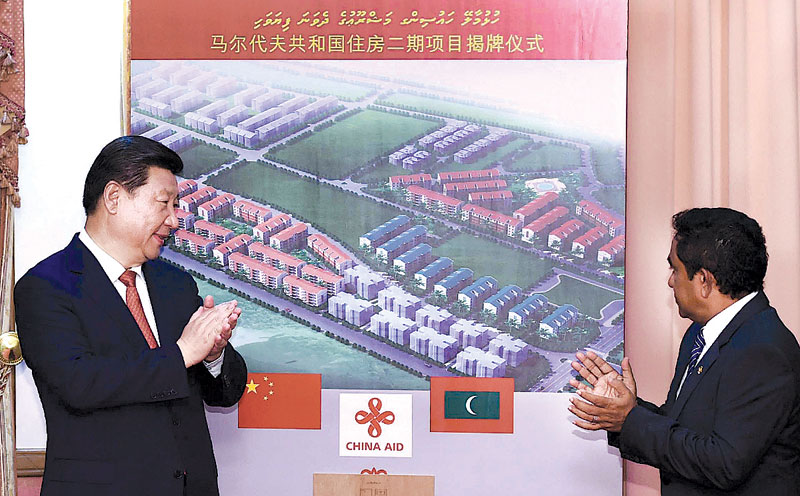 At night, from Bandos Island in the North Male Atoll, the twinkling Maldivian capital of Male, barely a few kilometers away, appears like a picture of calm. The tiny city spread over 5.8 square kilometers—68 times smaller than the city of Kathmandu—is as laid back during the day. At midday, its cobblestone-lined streets are packed with people and scooters, but no one seems to be in any hurry. In the local fish market, the stalls are stacked high with tuna and sardines and octopus, their smell suggestive of a jolly good fish curry at end of a long, hot day.

But this calm is also deceptive. Recent happenings in the tiny South Asian country of 400,000 smell a lot fishier than the rather neat Male fish market.

The country has just reinstated death penalty, breaking six decades of unofficial moratorium, supposedly to relieve the stress on its overcrowded prisons. Then, at the end of July, the government locked down national parliament in Male to prevent the opposition from impeaching the Speaker. With the parliament open, President Yameen Abdul Gayoom fears that the opposition, which now claims support of 45 of 85 MPs, could create trouble for him ahead of next year's presidential election. To save his government he has curbed press freedom and pandered to radical Islamists.

Above a million tourists visit the paradise country every year, and the flow has been unabated despite the recent political ructions. China is the main supplier, responsible for nearly a third of 1.2 million tourists to the Maldives in 2016. But these days it is not just tourists who come from the Middle Kingdom.

China is now responsible for nearly all the new major infrastructure development works in the Maldives or Na-lo-ki-lo-chou ("coconut islands") in the words of the seventh century Chinese writer Hiuen-Tsang. The Chinese are buying islands, building roads and infrastructure (including the spanking new National Museum), and there is even talk of a Chinese naval base in the island country.

Just as is the case in Nepal, the government in the Maldives is starting to believe its interests are best served by maintaining a safe distance from India and by inching close to China. Yameen fears that the main opposition, led by the deposed Prime Minister Mohamed Nasheed, is plotting his downfall with India's help. Maumoon Abdul Gayoom, the strongman who led the Maldives for 30 years, is the half-brother of the current president. But Gayoom too is now firmly in the opposition camp, supporting Yameen's ouster. President Yameen is suspicious of Gayoom who has always been grateful to India after Rajiv Gandi helped thwart a coup against him in 1988.

But it would be wrong to think it is only the government of the Maldives that thinks of China as a close friend. Since the resorts in the country, which are main source of employment for most Maldivians, greatly depend on Chinese tourists, there is immense public goodwill towards China. "The Chinese are our real friends," says a tour guide in Male. "They build us all the important infrastructures and send all those tourism dollars".

India has been unable to mount a credible defense against growing Chinese inroads; and Yameen feels increasingly emboldened with all the money flowing in from China.

When in 2015 Indian Foreign Minister Sushma Swaraj asked President Yameen to respect democratic rights of Maldivians, she was told in no uncertain terms to mind her own business. The Indian government has since maintained a studied silence over recent developments in Male. The fear is that any wrong move on its part could irrevocably send the Maldives into the Chinese camp.

Indian Prime Minister Narendra Modi seems to be in a fix.

Even though the underlying reasons are different, the dilemmas of the Indian establishment in the Maldives and in Nepal are similar. Does it for instance back the opposition parties in Male that have been prosecuted by the increasingly authoritarian Yameen, but then increase the tilt towards China? Or does it support Naseed and the opposition and restoration of democratic freedoms?

Likewise, in Nepal, the new fear in New Delhi is that if it continues to back the ethnic demands of the Madhesis, the Nepali establishment would be even more amenable to China. But alienate Madhesi parties and India risks losing a solid base of support in Nepal.

After a recent visit to the Maldives, one cannot but wonder if the Indians really get the subtle art of diplomacy.

But rather than coming up with clear, long-term policies on dealing with its important South Asian neighbors, the recent Indian approach has been shortsighted and ad hoc. Narendra Modi's South Asian muddle was perhaps best exemplified by veteran Indian journalist Vinod Dua in a recent episode of Jana Gan Man ki Baat in The Wire: What is Prime Minister Modi trying to achieve by visiting distant and seemingly unimportant countries like Turkmenistan and Tajikistan, he asked, when India's neighborhood is in a mess? He has a point. Modi does not seem to have a foreign policy that goes beyond demonizing Pakistan and China.

One after another, India is losing friends in South Asian. Anti-India sentiments in Nepal have never been higher, and the Chinese presence in the Maldives never so deep. Pakistan has been given a cold shoulder by India after the 2016 Uri attacks; Sri Lanka is once again coming back into China's fold; and never mind Doklam, even Bhutan appears uncertain about its unquestioned fealty to India.

After a recent visit to the Maldives, one cannot but wonder if the Indians really get the subtle art of diplomacy. The Chinese, whatever their ultimate intent, have mastered the art of lying low and biding their time. True, their checkbook diplomacy has its limits, but their preference for official channels also brings a great deal of clarity. By contrast, traversing the choppy waters of Indian diplomacy can be as challenging as safely navigating, without a compass, that enigmatic country of 1,200 islands south of India.

10 high-profile gamblers arrested with Rs 3 million in Nepalgunj
12 hours ago
NC demands govt rescue the students who were attacked in Dehradun, India
7 hours ago