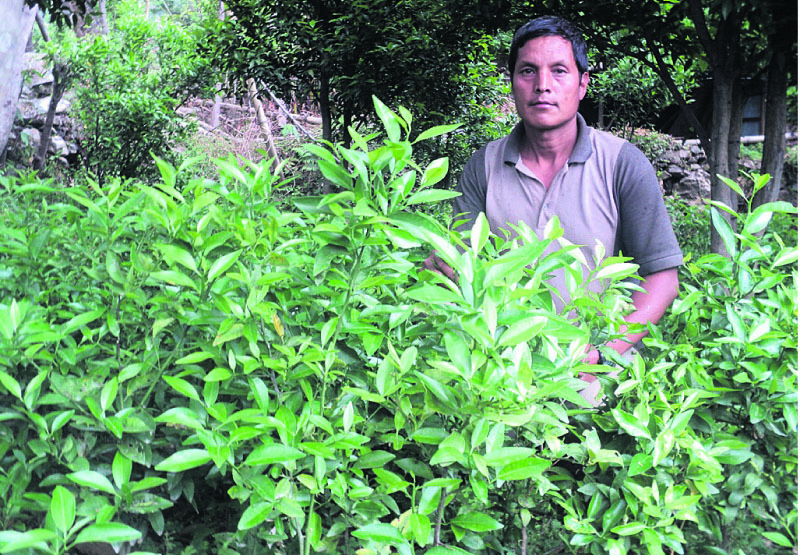 PARBAT, Aug 7: Nar Bahadur Paija of Baskharka, Parbat district, spent his five precious years in Malaysia and Qatar as a laborer. Unable to make enough money, he returned to the country and started orange farming. Now, he is earning more than Rs 700,000 every year. He has around 200 orange trees in his field.

Apart from the farm, Paija also has an orange nursery, which has given him a profit of Rs 3,500,000 this year. Last year he had saved Rs 200,000 by selling orange saplings only.
He said that his saplings reach markets across the district. He has added 250 saplings in the nursery this year alone.

“There is no loss in this business, what matters for success is your hard work,” Paija told to Republica.

Similarly, Indra Bahadur Pun from the village had also been abroad for unskilled job. But like many others, he faced many problems. After not being satisfied with his job, he returned to Nepal. He also started an orange nursery. Now he has 400 orange trees in his farm. He sold oranges worth Rs 650,000 this year. As the production is increasing, his income is also increasing every year.

There are many entrepreneurs like Paija and Pun in Baskharka village who are making good income by selling orange.

According to local Jagat Bahadur Khatri, the total annual revenue of orange in Baskharka village is Rs 35 million. He himself earned Rs 800,000 from his 600 orange trees this year.

While the youth elsewhere are seeking underpaid jobs, there are many entrepreneurial young men and women in Parbat who are comfortably self-employed via agricultural activities. People returning from abroad are earning good amount from farming.

Apart from orange, locals in Parbat are involved in commercial goat farming too. Take the example of Yam Bahadur Gurung from Dudakhoriya, Bhoksing. After starting the venture, his earning has gone up every year.

“While the youth are going abroad for labor, here I am earning good amount in my own village,” Gurung said. He has 56 goats in his farm, of which 31 are mother goats. The demand of local breed of male goat is high in the market since its meat is good to eat. Currently his eight male goats are ready for sell. Gurung family has been doing goat farming for the last two and half years. A nearby forest has made their farming easy.

“There is good income in goat farming. I believe that my investment won’t be lost,” he said. His target is to make more than 100 mother goats soon.

In Bhoksing, goat meat is available for Rs 500 per kilogram, which is cheaper than in other parts of the district, giving a comparative advantage for goat meat sellers.

Gurung said that he exports goat meat not only to nearby markets but also to the market of Pokhara Lekhnath metropolitan city.

GORKHA, April 27: Poultry farmers in Gorkha district have proven that Nepalis can earn over twice the income working in our... Read More...

Rains in Kathmandu Valley throughout day
20 hours ago