Aasif, Jora make return in U-19 squad for Asia Cup 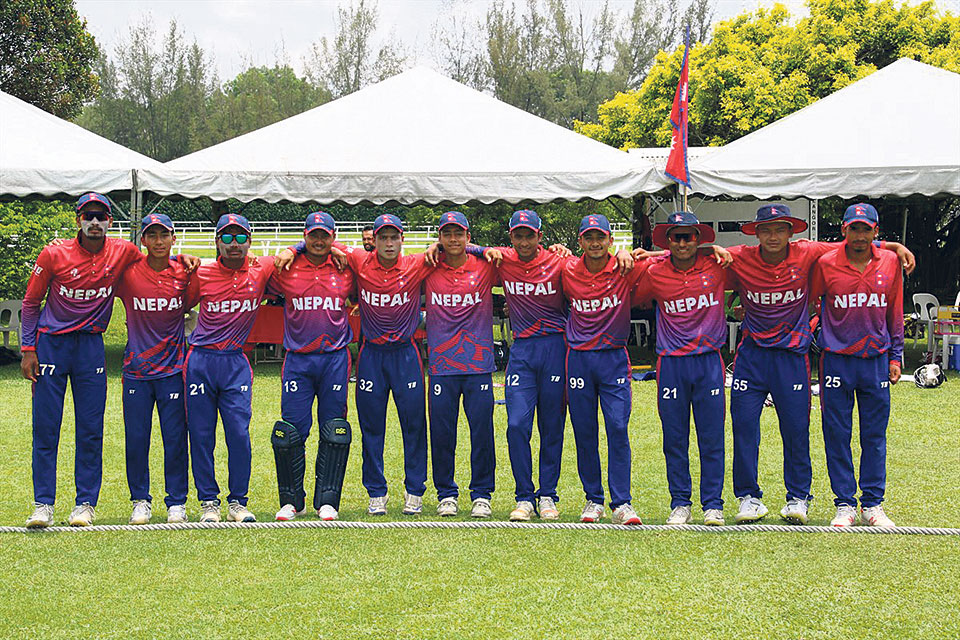 Players of Nepal U-19 cricket team pose for a group photo ahead of their ICC U-19 World Cup Asia Region Qualifiers cricket match against Oman in Kuala Lumpur, Malaysia in this file photo dated April 16. Photo Courtesy: Raman Shiwakoti

KATHMANDU, Aug 23: Sundeep Jora, Aasif Sheikh and Surya Tamang have made returns in the 15-men squad after Asian Cricket Council (ACC) approved the squad for next month’s ACC U-19 Asia Cup to be held in Sri Lanka from September 5 to 14.

All three players who missed the trip to Malaysia for the ACC U-19 Eastern Region winning campaign in July have been included in place of U-16 captain Bishal Bikram KC and leg-spinner Tilak Rajbhandari. Nepal is set to feature in the upcoming Youth Asia Cup by virtue of finishing in top two of the same tournament.

Rohit Kumar Paudel has retained the captaincy after being trusted for last two assignments in Eastern Region and the ICC U-19 World Cup Qualifiers. Nepal had missed a spot in the world cup by a run loss against the United Arab Emirates (UAE) under D/L method.

The senior team all-rounder Pawan Sarraf will continue to open with two-time age-level centurion Rit Gautam. Another senior team member Jora will be partnered by longtime prodigy Aasif in the middle order and the dependable Bhim Sharki. Hari Bahadur Chauhan and Lokesh Bam will share the wicket-keeping duties along with finishing the innings with the bat.

The fast bowling pair of Rashid Khan and Kamal Singh Airee will look to torment the established test nations in the upcoming event whereas left-arm pacer Pratish GC will be a handy backup.
The spin bowling duty is led by Sagar Dhakal whose stakes have risen in the last couple of editions supported by all-rounder Kushal Malla and Surya Tamang’s left-arm spin.

Head coach Binod Das has entrusted the almost same squad for the last three assignments whereas former Nepal captain Raju Khadka will be managing the team. Likewise, Subash Patro and Vikram Nyaupane will accompany the team as trainer and physiotherapist, respectively.

The batting consultant from India, Apurva Desai will join the team in Sri Lanka where Nepal is set to play few practice matches before the tournament kicks off on September 5.

Nepal is placed with host team Sri Lanka, Bangladesh and the United Arab Emirates (UAE) in Group B for the marquee youth Asian cup. The top two teams after the single round-robin league will reach the semifinals. The final match has been scheduled for September 14.

KATHMANDU, Oct 3: A blistering partnership of 53 runs between U-19 cricket team’s Rohit Kumar Paudel and Rashid Khan in... Read More...

IN PICS: Haphazard disposal of used masks, gloves likely to emerge as major health and environment risk
1 hour ago

Lebanon mourns victims of devastating blast, searches for missing
6 hours ago
43 diagnosed with COVID-19 in Birgunj including medic, army personnel and banker
7 hours ago