A tale of grit and interesting times 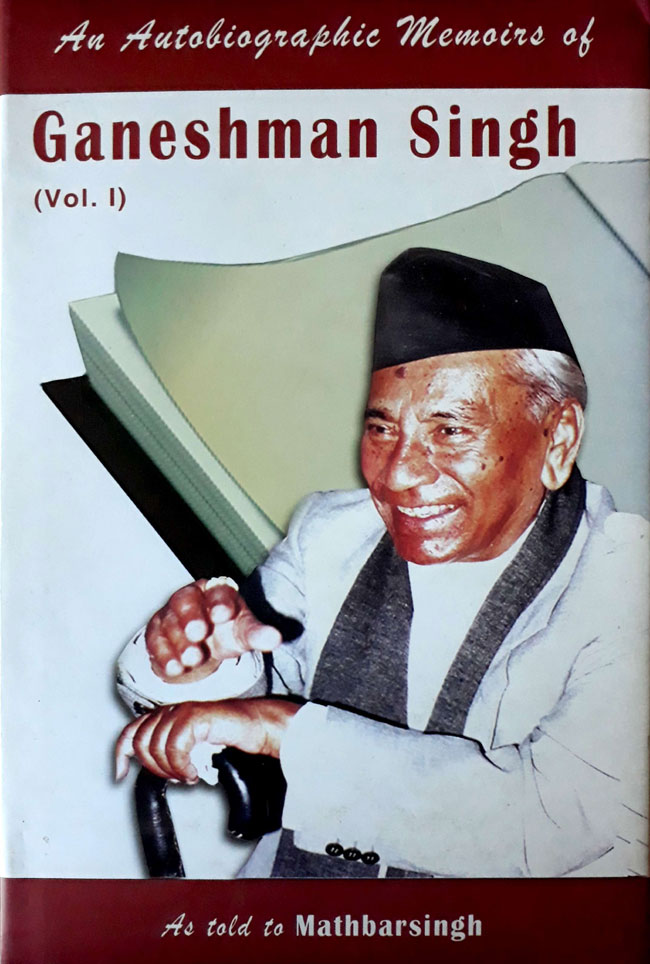 This two-volume work is a translation into English of an autobiographical account of the life and times of Ganesh Man Singh, as told to journalist and Nepali Congress party activist Mathbarsingh Basnet. The translation from the Nepali original was done by Prof. Lal D.Rai. These accounts appeared in serial form in the Nepali language weekly Punarjagaran, and in the weeklies Vishwasandesh, Vishwadoot and Vartalap before that.
Mathbarsingh took down Ganesh Man’s accounts with Boswell-like faithfulness and great attention to detail. The rugged prose of the work seems to inadvertently reflect something of the ruggedness of the great man himself. But it is very readable, and is particularly handy for those who take an interest in the politics of Nepal but do not have the habit of following the vernacular press.

Zeitgeist is the word that readily comes to mind when one ponders why someone of Ganesh Man Singh’s background should find himself plunging into the movement to overthrow the century-old Rana regime. Considering that he was a scion of a privileged Newar family and that his grandfather was a badakazi no less in the ruling establishment, one might well wonder what compelled him to take up cudgels against that very establishment and put himself seriously in harm’s way on a protracted basis.

He was well placed to make the most of that Ruritanian realm, which could be quite generous to its loyal cohorts. Ganesh Man does cite incidents of personal slight that he suffered at the hands of some individual Ranas. He also says the abject poverty and hardship he saw all around moved him to join the Nepali Congress in its various permutations. But was that all there was to it? These volumes have little to say about the philosophical underpinnings, if any, of the cause to which he devoted his life.

One is also reminded of the winds of change evoked by Harold MacMillan, at one time prime minister of the United Kingdom. McMillian was speaking about the changes sweeping Africa when that continent was in the cusp of post-colonial independence. The winds of change that would sweep the South Asian sub-continent were already picking up as Ganesh Man came of age.

Ganesh Man Singh arrived on the scene at a critical phase in the recent history of Nepal and played a considerable role in the unfolding course of events. What he has to say is important for a closer understanding of that history.

And something that comes across unmistakably from the narrative is what a man of iron Ganesh Man indeed was. The sobriquet is well deserved. Starting with his jail break at Sundhara, his astounding feats included waiting it out for weeks in the Slesmantak forest at Pashupati while on the run, slashing his way through tiger-infested Thori jungles for three days on an empty stomach, crossing a Tarai river in spate on elephant back, and never breaking under torture. It is true grit all the way. Another facet of his character is that he was a big-hearted man, and self-deprecating. He felt decidedly uncomfortable on being acclaimed leader by the people of Kathmandu after his formal release from jail.

More relevant to recent political history, it emerges from the book’s narrative that the Nepali Congress revolution of 1950-51 was meant to be outwardly non-violent but was inwardly otherwise. There was a bomb plot against the Ranas. The plot was to blow the top echelons of the Rana establishment to kingdom come in the course of the Indra Jatra festival. Ganesh Man himself was given responsibility for planting the bombs in Kathmandu. Abducting King Tribhuvan was part of the strategy. Being judgmental here, but the only thing setting apart all that the Nepali Congress did then from what the Maoists were to do about half a century later, aside from the vastly different casualty figures, is that the latter were assaulting a legitimate, democratically instituted state that was still going though its teething troubles.

And inevitably, overshadowing the entire saga of Ganesh Man and his times is the ever-present India factor. This aspect of the narrative could not have been more pertinent than right now, when the big neighbor down south has taken to weighing in on us like almost never before. Thus we learn that the Nepali Congress once approached Mahatma Gandhi himself to secure the release of Bisheswar Prasad Koirala from the Rana jails.

Then as in more recent years, there were theNew Delhi parlays. The parlays were more like proximity talks, with the Indians acting as go-betweens. Mohan Shumsher’s proclamation of critical reforms, made in response to the Nepali Congress revolution and with Delhi’s blessings, took that party by surprise. The subsequent calling off of the revolution was a compromise move dictated by circumstances. Nehru was not in favor of ditching the Ranas all at one go. He was said to be skeptical about the Congress and its ability to manage change, because of its lack of experience. The role of King Tribhuvan in all this was said to be limited to making his dramatic flight to India.

Ganesh Man himself was not happy with the suspension of the armed insurrection. But he was still in jail when the New Delhi talks were taking place. And other Congress members were not happy when Bhadrakali Mishra of the then Tarai Congress was imposed under Indian pressure as a member of the Rana-Congress government.

Familiar echoes all this, of more recent times. India’s hand in Nepalis affairs down to the present day seems to be just payback for its critical role all those years ago. Itself only recently granted self-rule by the departing British, India’s new masters acquired an early taste for meddling across the border.

There is also the observation, made more than once, that the UK and the US did not want to take any stand concerning Nepal without first finding out how the Indians felt. So what else is new? And by way of a historical footnote, the British had sent a mission to save the day for the Ranas. The British, it will be recalled, also sent a mission to help sort things out between King Gyanendra and the Maoists, with similar results.

But close as Ganesh Man was to all that history in the making, the reader will not find here any light thrown on how the army’s loyalties came to shift from the Ranas to King Tribhuvan. For that indeed is the crux of the matter. It was because of the inability of the Nepali Congress to win over the army’s loyalty, let alone retain it, that it came a copper come Satrasaal.

As is to be expected of a longish narrative from someone who lived through it all, the book is peppered with curious and interesting details. There is prevailing through much of the narrative the ambiance of the Rana court. The salience of the khariko bot tree at Tundikhel as a regular venue for events of state finds mention, as does the use of Dharahara for sounding the bugle to summon the troops. (The army did not have regular barracks in those days and the troops lived scattered across the Valley with their own families.)

One also learns that Ganesh Man wanted to join the Indian air force when World War II broke out. But he was rejected because his height was a little too short.  He also used to go about under the alias of Krishna Bahadur Pradhan. The four-star flag of the Nepali Congress came to be adopted only because of a logistical mistake. There is mention of the Khukuri Dal, let loose with naked khukuris in hand by the Ranas in a desperate attempt to cow the restive populace of the capital. Those must have been interesting times.

There is more, much more, before the narrative ends with the swearing in of the Rana-Nepali Congress cabinet in 1951. The translator of the book says he found it very fascinating, so much so that at times he felt he was dealing with a work of fiction. But truth of course is always stranger than fiction. Attached to the two volumes are photographs, including some of archival value.

A word of criticism: The entire two volumes are pockmarked with typos, some of them embarrassing, and by silly factual errors. The book refers, for instance, to the Archduke Ferdinand of Australia (sic), and to his assassination, which triggered the First World War, as having taken place in Persia. The gravitas of the subject matter would surely have warranted rather more careful editing.

In the schools with separate toilets for girls, the attendance rate is high. In those where such facilities are lacking, many... Read More...