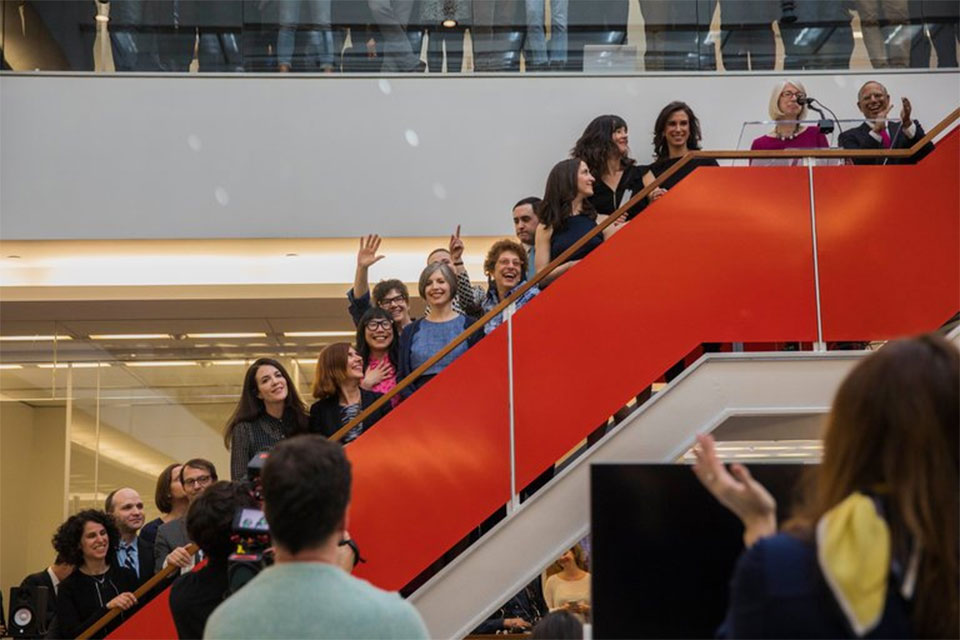 Reporters and editors at The New York Times on Monday after their articles detailing allegations of sexual harassment by powerful men, including the film mogul Harvey Weinstein, helped The Times win the Pulitzer Prize for public service. Hiroko Masuike/The New York Times

April 17: Pulitzer Prizes were awarded on Monday to the news organizations that drove two of the biggest stories of the year: the high-stakes investigation into President Trump’s relationship with Russia and the consequential reckoning about the treatment of women by powerful men.

The prize for public service, considered the most prestigious of the Pulitzers, went to The New York Times and the New Yorker magazine for their revelations of sexual harassment and abuse that had gone on, unheeded and unpunished, in the spheres of Hollywood, politics, the media and Silicon Valley.

The national reporting prize went to The Times and The Washington Post for their coverage of Mr. Trump’s possible ties to Russia — a recognition of two journalism stalwarts that exposed the hidden activities of the Trump White House while withstanding much presidential ire.

And in a surprise pick, the rapper Kendrick Lamar received the prize for music for his pointed and defiant album, “DAMN.” It was the first time that a musician outside the classical discipline or jazz had won the award since it was first handed out in 1943.

Mr. Trump’s lacing attacks on the press — the president has impugned reporters by name, railed against outlets whose coverage he dislikes and mused about making it easier for journalists to be sued — were an uneasy backdrop to the awards, presented annually by Columbia University to recognize excellence in journalism and letters.

“Winners uphold the highest purpose of a free and independent press — even in the most trying of times,” Dana Canedy, the awards’ administrator, said at the start of Monday’s announcement.

But in its choices for the public service prize, the Pulitzer board also recognized the cultural shock waves caused by the #MeToo movement, which has reshaped the modern conversation around gender, harassment and fairness.

The board cited revelations in The Times about the Fox News host Bill O’Reilly, whose history of settlements over harassment allegations had done little to affect his career as the king of cable news. After articles by The Times’s Emily Steel and Michael S. Schmidt, Mr. O’Reilly was ousted by Fox News last year. (Mr. Schmidt, who was also part of the Times team that won the national reporting prize, was honored twice in one year, a rare Pulitzer feat.)

The prize also recognized investigations into the film mogul Harvey Weinstein, whose predations of women — and extensive efforts to cover up his behavior — were exposed in The Times by Jodi Kantor and Megan Twohey, and in The New Yorker by Ronan Farrow.

The coverage of Mr. Weinstein, who has since lost his movie empire, set off a cascade of testimonials from women about abuse in the workplace, whether at a Beverly Hills hotel or a Ford Motor plant in the Midwest. Famed personalities, including the comedian Louis C.K. and the chef Mario Batali, saw their careers derailed after women came forward with allegations of misconduct.

“By revealing secret settlements, persuading victims to speak and bringing powerful men to account, we spurred a worldwide reckoning about sexual abuse that only seems to be growing,” Dean Baquet, executive editor of The Times, told hundreds of journalists who had gathered in the paper’s Manhattan newsroom on Monday for the Pulitzer announcements.

The Post won the award for investigative reporting for its exposé of Roy S. Moore, the Republican Senate candidate in Alabama, whose bid for higher office was upended after The Post uncovered that he had groped and harassed multiple women, one as young as 14. Besides unearthing the allegations against Mr. Moore, The Post’s reporters foiled an attempt by the right-wing activist James O’Keefe to undermine their reporting by planting false information in the paper.

Mr. Saltz, an impish and catholic critic, often analyzes the crossroads of art and politics, particularly the cultural vectors of Mr. Trump’s America. His prize was one of several top awards that went to magazines, which became eligible for all Pulitzer categories only in 2016.

GQ won this year’s feature writing prize for a searing profile by Rachel Kaadzi Ghansah of Dylann Roof, the white supremacist who killed nine African-American churchgoers in Charleston, S.C., in 2015. Mr. Farrow’s reporting on Mr. Weinstein in The New Yorker revealed, in part, the sophisticated network of lawyers and private eyes that the producer deployed to shield his behavior from public view.

The Times received three awards in all, including the prize for editorial cartooning — a first for the paper — for a series that chronicled a Syrian refugee family’s entry into the United States. The public service prize was the sixth time The Times has received the prestigious award in the more than century-long history of the Pulitzers.

The staff of The Cincinnati Enquirer won the prize for local reporting for its coverage of families ravaged by heroin addiction. Reuters won the international reporting prize for covering brutal killings ordered by President Rodrigo Duterte of the Philippines.

Photography prizes went to Reuters, for images of the violence in Myanmar, and to Ryan Kelly of The Daily Progress in Charlottesville, Va., who captured an image of a car plowing into a group of protesters at a rally that led to a national outcry over white supremacism.

In the artistic categories, the award for fiction went to “Less,” by Andrew Sean Greer, a globe-trotting chronicle of an aging novelist confronting middle age, career disappointments and travails in love.

“Cost of Living,” an Off Broadway play by Martyna Majok, won the prize for drama. “I am shaking,” Ms. Majok, 33, a Polish immigrant who saw her first theater show at 17 after winning $45 from playing pool, said in an interview. “I am overcome and overwhelmed. When I got the news, I didn’t believe it for a solid 10 minutes.”

The nonfiction prize went to “Locking Up Our Own: Crime and Punishment in Black America,” a book by James Forman Jr. that traced the history of contemporary criminal justice. A life of the author Laura Ingalls Wilder, “Prairie Fires,” by Caroline Fraser, was named the prizewinner for biography.

Mother-daughter-mother actresses Debbie Reynolds and Carrie Fisher, who died in December just a day apart, were remembered by fans and... Read More...