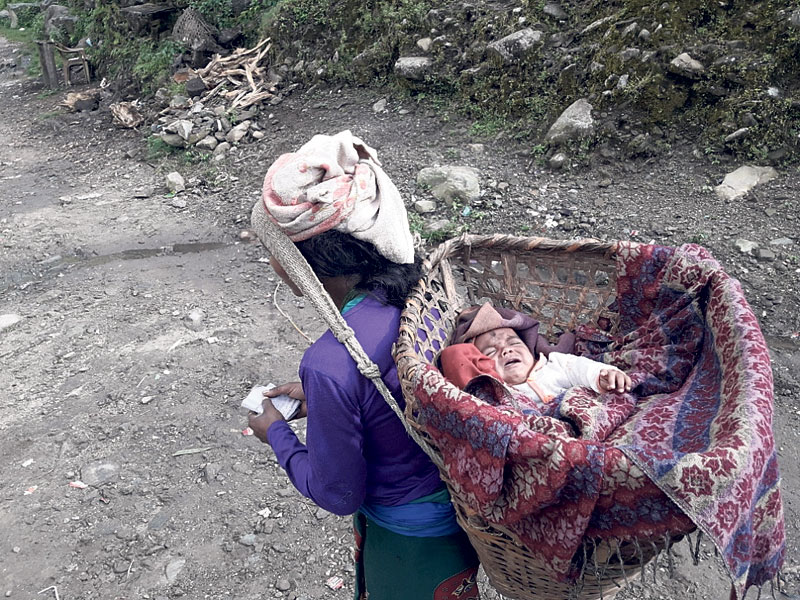 GULMI, Sept 13: After waiting for years, Mani Pariyar of Madane Rural Municipality-2, Banjhkateri delivered a son after four daughters to fulfill the desire of her husband. Birth of her son was a joyous moment that the family had been waiting for so many years. But unfortunately, that happiness didn't last long.  After one and a half months of giving birth to her son, Mani had to mourn the death of her husband.

It has been seventeen days since she lost her husband but she has not been able to control her tears which keep rolling down her cheeks. After the death of the breadwinner, Mani is wandering from place to place begging for alms with her two months old son. Twenty eight-year-old Mani, who got married at the age of 19, has four daughters and a mother in-law at home for whom she has not been able to manage food. In the name of assets, all she has is a dilapidated house and a little farmland.

Her husband Rana Bahadur Pariyar, who was a labor by profession, died on August 23.
“I don't know how I will sustain my family members without him,” she said. At this time, when she is supposed to take rest and have nutritious diet she is wandering here and there seeking for food and money.

“I can't expect my septuagenarian mother-in-law, who is 74, to do all this. Nor can I expect it from my little daughters,” she laments. There is nothing in her home so this new mother is obliged to eat whatever she is provided by the locals.

Nanda Mina Pariyar, a neighbor said, “They gave birth to so many children expecting a son despite being aware of their financial status.” Mani was compelled to deliver so many children for satisfying her husband's need for a son but she had never imagined she would have to raise them alone.

As informed by a local businessman Moti Bahadur KC, locals collected some money for the family to perform the final rites of the deceased. Though her elder daughter has become six years old, she has still not been admitted to school.

“I don't have a penny to pay for their education. Even if I somehow managed to send my elder daughter to school, who will look after my other daughters?” She questions.
Bishnu Bhusal, health assistant of Madane Community Health Centre, informed that the centre is planning to provide free health treatment and financial aid for supporting the destitute family.

BUTWAL, July 8: The mother of a 16 years old girl who was torched alive while asleep has accused the... Read More...

A mother searching for her son since 12 years