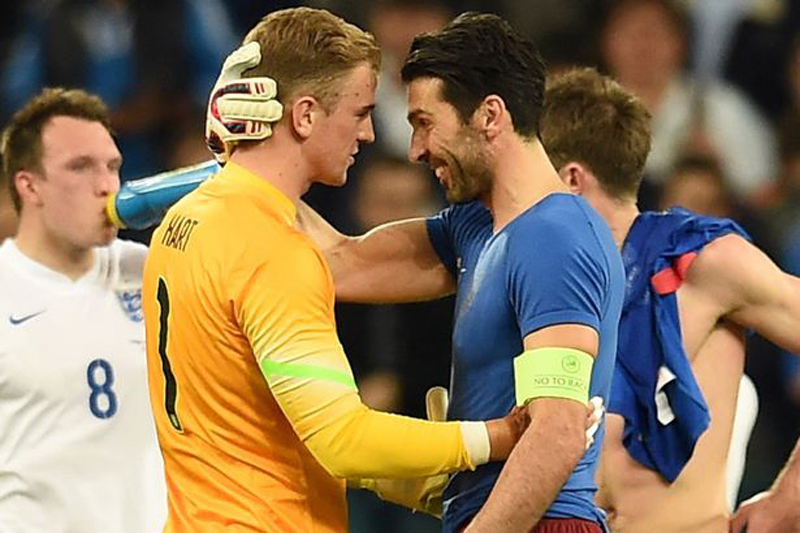 ROME, Dec 9: Italy's best goalkeeper opposite one of the best foreigners at the position.

With matchups like Gianluigi Buffon against Joe Hart in goal and Gonzalo Higuain facing Andrea Belotti in attack, Sunday's Turin derby will have plenty of individual star quality.

It's the combined quality of both squads, though, that sets the match apart from recent editions of the rivalry.

While Juventus continues to dominate Serie A — the Bianconeri are aiming for a record sixth straight Serie A title — Torino is showing more promise this season than it has for decades.

In seventh place, just three points behind fourth-place Napoli, the "Granata" (maroons) are firmly in the running for a Europa League spot.

"Torino is strong, they've strengthened themselves this year with the arrival of skillful, experienced players, but the flavor of this derby doesn't change — it's always a special match," Juventus midfielder Stefano Sturaro said.

Buffon and Hart had a memorable duel when Italy beat England in a penalty shootout following a 0-0 draw in the quarterfinals of the 2012 European Championship.

This is the first time two of the world's best goalkeepers will face each other in Serie A, following Hart's loan from Manchester City — making him the first English goalkeeper in the history of Serie A.

Both goalkeepers will have to worry about top-quality forwards in Higuain and Belotti.

Higuain joined Juventus for an Italian-record 90 million euros ($100 million) after scoring 36 goals for Napoli last season to break a 66-year-old Serie A record. While Higuain has struggled at times with his new club, the Argentina international ended a month-long drought by scoring the opener in Juventus' 2-0 win over Dinamo Zagreb in the Champions League on Wednesday.

Belotti, meanwhile, has scored 10 goals in 13 Serie A matches and three in five appearances for Italy after making his debut for the national team in August.

Amid reports of interest from Manchester United, the 22-year-old Belotti recently agreed to a contract extension through 2021 and a 100 million euro ($106 million) escape clause at Torino — slightly more than what Juventus spent on Higuain.

"I'm going to repay this confidence by always giving my best, every day in training and in every minute of every match," Belotti said.

Belotti has combined with former Roma forwards Iago Falque (seven goals) and Adem Ljajic (five) to help form the third-most prolific attack in the Italian league this season. Only second-place Roma (35 goals) and Juventus (32) have scored more goals than Torino (31) this season.

Perhaps the biggest difference between the teams lies in defense.

Despite Hart's influence, Torino has struggled to defend dead-ball opportunities while Juventus has been able to weather injuries to key defenders Andrea Barzagli, Leonardo Bonucci and Giorgio Chiellini.

Daniele Rugani, a 22-year-old defender considered the next in a long line of great Italian center backs, has filled in admirably for Juventus and has also shown off his abilities on headers, scoring from corners against both Atalanta last weekend and Dinamo.

A worry for Juventus is the alarming trend that all three of its losses this season have come following Champions League matches.

Still, Juventus is confident with a four-point lead in Serie A and after winning its Champions League group.

"We had three objectives for before the holiday break: winning the group, staying ahead in the Italian league and winning the Super Cup," Juventus manager Massimiliano Allegrin said after the win over Dinamo. "We're on the right path."

Torino's rise has mirrored that of its president, Urbano Cairo, who in August became chairman and chief executive of the RCS media group, which publishes the Gazzetta dello Sport and organizes the Giro d'Italia cycling race.

Torino can also rely on a coach known as a great motivator.

Sinisa Mihajlovic, who was hired in May after he was fired by AC Milan, has had plenty of experience in derbies, starting with his playing career with Roma, Sampdoria, Lazio and Inter Milan.

"The derby is a match for men," Mihajlovic said. "We've got the utmost respect for Juve but we know that if we play like we're capable of we can play even with them, and even win."

If upcoming Sunday's clash does indeed turn out to be the last North London derby at Tottenham Hotspur's historic White... Read More...