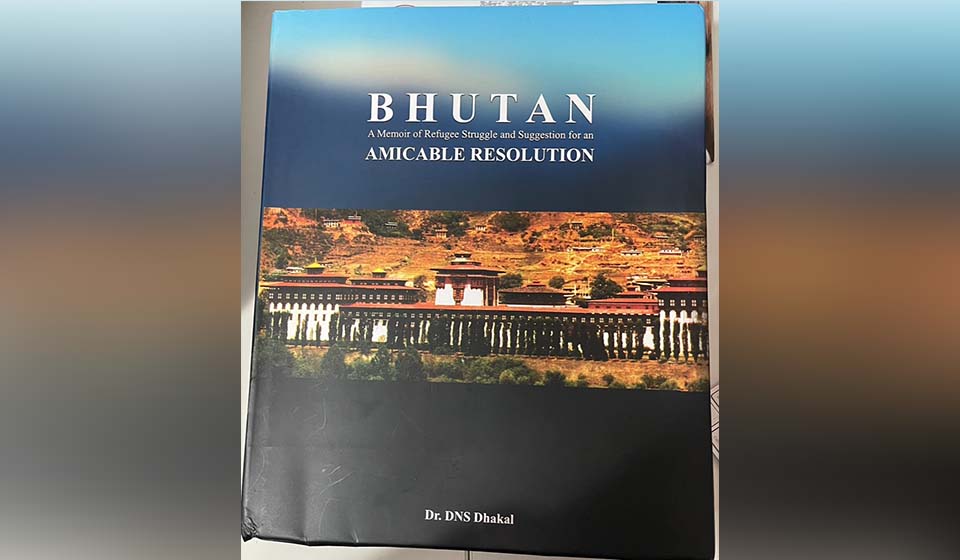 The mystic Shangrila, Bhutan, changed its political course evicting over 20 percent of its population in 1990 hoping to fare well with Gross National Happiness mantra but the action will continue to hunt it back unless it adequately addresses the grievances of the Lhotsampa population.

The new book by Dr DNS Dhakal ‘Bhutan: A Memoir of Refugee Struggle and Suggestions for an Amicable Resolution’ paints a glimmer hope of amicable resolution of the Bhutanese refugee saga that will benefit both Bhutan and its evicted citizens. After languishing for almost two decades in Nepal as refugees, overwhelming majority of these refugees have now been permanently resettled in western countries.

Dr Dhakal is one of a handful of refugee leadership who hesitated to resettle in favour of continuing the democratic struggle. Through this book, he hopes that Bhutan would open its doors for at least a portion of the remaining refugees for repatriation. The symbolic repatriation will reconnect the Bhutanese diaspora with their family and relatives left back in Bhutan at the wee hours of rushed eviction spree. He says this will not only build stronger emotional connection between Bhutan and its newly build diaspora but helps propagate the positive message about Bhutan in the world forum.

Though the Lhotsampas (Nepali speaking population in Bhutan) have solid history in nation building including installation of the Wangchuk monarchy, the ruling elites remained suspicious of Lhotsampas and their intensions. Until mid of last century, the Lhotsampas reported to the Dorji family in Kalimpong (India). Wangchuks imposed direct supervision to the southern Bhutan following the suspicious murder of Bhutanese Prime Minister Palden Dorji in 1964. The relation was rebuilding solid until the government implemented new policy in 1985 on suspicion that southern Bhutan had many illegal migration and cross border marriages.

According to Dr Dhakal, King Jigme Singye Wangchuk remained the victim of misinformation of his courtiers on fears, loyalty and concerns presented by Lhotsampas. King listened to his men, not the citizens. Though Dr Dhakal fails to mention that the monarch must shoulder the responsibility of the mess while taking helm of the leadership, King indeed silently accepted his mistake when he surrendered his throne to his son in 2006. Dhakal indicated the entire saga was criminally crafted by then home minister Dago Tshering.

The book chronicles writer’s own struggle in building trust with the ruler in Thimphy despite being himself a senior and trusted member of the bureaucracy. While laying majority blames to Bhutan for all that happened in 1990s, he suggested that the refugee leadership has the onus of taking responsibility of their erroneous actions in early years of the struggle. He suspected outside agents - the agitation of Gorkhaland and communists in West Bengal are likely fuels to the fire in Bhutan. Dhakal’s suspicion has not been substantiated yet but confession of Nepalese former prime minister Late Girija Prasad Koirala, during the launch of book by Tek Nath Rizal in March 2010 in Kathmandu that he had visited Bhutan in 1952 to help establish Bhutan State Congress, gives us some hint of external catalyst acting in Bhutan.

The evicted citizens of Bhutan were not given shelter by India. They were dumped to Nepal. Managed by UNHCR and other international non-governmental organisation, Bhutanese refugees live the most pathetic life for two decades. However, the writer was quick to point out that waste management, security and education was among the best of refugee communities managed by UNHCR at that time.

When an elected government was installed in Bhutan in 2008, it trashed the policies of the previous governments to restrict its citizens from any form of communication with refugees. In fact, the Thinley-government not only opened communication between the separated family members, but also allowed the citizens in Bhutan to receive financial support from resettled Bhutanese refugees.

In resettled countries, informal engagement between Bhutanese students and resettled refugees have opened. The new generation from Bhutan is gradually understanding the fact that refugees are not the terrorists as they were indoctrinated through school curriculum.

The repatriation movement has failed. Most refugees and their leaders have chosen their destiny – are now citizens of developed countries. There’s a small population in Nepal still living in refugee camps hoping to get back to their country one day.

Writer stresses that these individuals must be allowed to return, compensated for the losses they incurred and given all rights guaranteed by constitution. The 1950 fiasco of Bhutan’s democratic struggle also ended on similar fashion in 1968 when king announced he pardoned those who agitated against the government of that time.

If Bhutan recognised resettled Bhutanese, the country would have the biggest Diaspora. This will help rebuild family relations, strengthen the Bhutan’s diplomatic presence and biggest opportunity for Bhutan to build its economy through tourism and investments.

The write recommends that both – Bhutanese government and resettled Bhutanese – must work for mutual benefits.

‘Bhutan: A Memoir of Refugee Struggle and Suggestions for an Amicable Resolution’ flows well in very plain language. The book is the most comprehensive compilation of Bhutanese democratic struggle written by a refugee publish thus far. The essence of Gross National Happiness turns to a reality if the writer’s wish come true.

Book: Bhutan: A Memoir of Refugee Struggle and Suggestions for an Amicable Resolution

Development in Nepal: Keep head on horizon and hands on land

The gist of the book is that Nepal should embrace the green economy development model to benefit from its vast... Read More...