In quarantine, in America 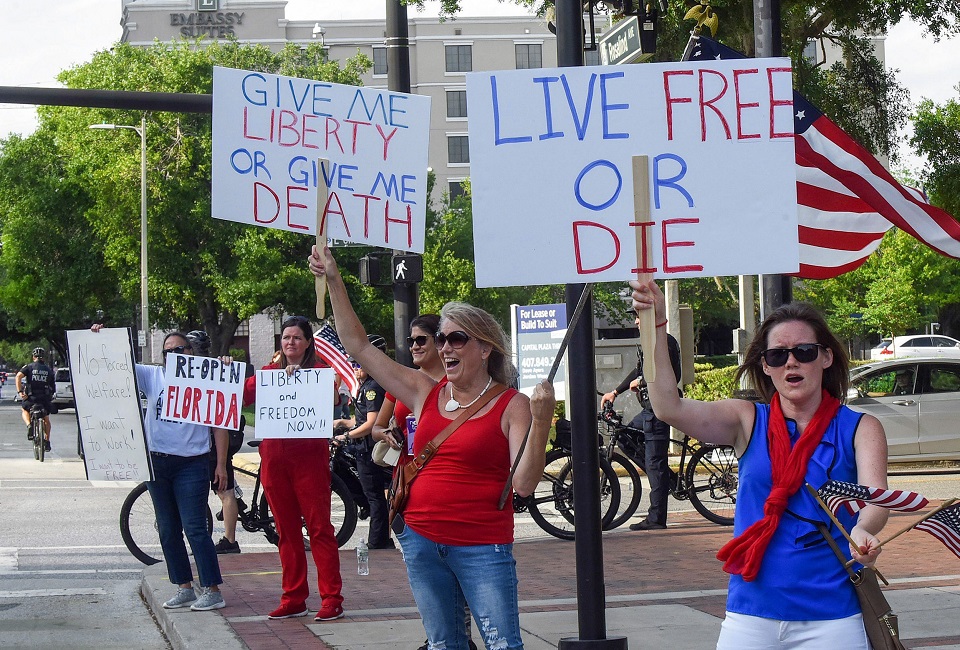 America is turning out to be the most distorted and depraved democracy under a new nationalistic fervor. This new normal in America scares me despite being a staunch believer in freedom and democracy

Too much freedom spoils a country and its characters. I have evolved as an unstable character since I started working from home beginning mid-March because of stay-at-home orders owing to the coronavirus pandemic. My workspace keeps changing from couch to study table to dining table to the kitchen island to deck depending on my mood. I can occupy any space I want anytime. Had it not been for the coronavirus, I would be working from a space that is neither assigned nor reserved to me.

However, my habit of reaching the workplace daily on time has helped me occupy a shared space with a white guy. He used to commiserate with me for being unable to work from home and I used to pity him for having to work from home as he required collaborating with offshore (India) colleagues during odd and off-hours. Anyway, we share some stark similarities. Both of us drink just plain water although the office vending machine offers varieties of coffee and an array of hot beverage options for free.

One day he was pleasantly surprised to know that I was a Nepali (not Indian). That was when he confided to me that he was tired of his manager (of Indian origin) who has an Indian style of (mis)management. Ironically, I adore my manager (of Indian origin) who has an American style of management. However, I loathe most dominating and condescending Indian politicians and diplomats.

The world of diplomacy is mired in controversy as the blame game about the coronavirus heats up between the West and China with the latter rejecting the former’s proposal to investigate its origin. The world of politics has gone even murkier as expected. President Trump is getting much trumpier. Recently, he sounded totally ‘unhinged’ when he suggested that people should apply ingestion and injection of disinfecting chemicals to combat the coronavirus while speaking from The White House lectern during a daily coronavirus briefing. Next day, he said he was being sarcastic. He looks to have stopped counting the number of deaths in the USA as he is busy counting the number of days to the presidential election in November.

Our very own Oli has created no less of a spectacle from Baluwatar. He romanticized about two ordinances on political parties and constitutional council. But he was compelled to repeal them within no time owing to unified opposition within his own party. Fortunately, he is enjoying unprecedented luck as Nepal has been able to avoid any Covid-19 related deaths so far. At the same time, I have heard and read many Nepalis dismissing America for its utter failure to prepare for the coronavirus pandemic that has exposed leadership debacle. That is justified to a great extent.

Frankly speaking, this is the first time Nepalis are romanticizing about coronavirus as it wrecks havoc across America and around the West. The scenario was exactly the opposite when Nepal was facing a violent Maoist insurgency. The West and its media romanticized and covered news about the minor Maoist militia and guerillas clad in hammer and sickle printed bandana carrying oversized rifles and training in the jungles and launching offensives and wiping police posts in the far flung villages. They never tried to gauge the devastation caused by the so-called fake revolution. Each person killed was not a face but a number to be covered in the news and broadcasts.

The Maoists’ bandanas were a source of terror and a certificate to kill people who opposed them and their violent ideology back then in Nepal. But it’s a shield against the terror of coronavirus in America and the West. Every American who does not have access to masks is advised to use bandanas as masks. In a reversal of fate, the most developed country in the world is unable to provide even a single mask to its citizens now.

I ordered a pack of fifty disposable masks on Amazon on the first day of April. My order was not April fool’s business. But the seller made one and wrote asking me to cancel the order through the system as they were not in a position to fulfill the order. I had no choice but to abide by it. Finding masks in the local supermarkets was/ is just wishful thinking. I dug out three handkerchiefs from my pant pockets.

When I came to the USA six years ago, I hesitantly bought bandanas to use as handkerchiefs as I did not find any item labeled handkerchief in any big box store. A handkerchief is a multipurpose item now in this country. It’s not just a bandana, it’s a mask that I use to cover my mouth and nose while going on morning and evening walks occasionally and shopping for groceries every two weeks.

Of late, I am surprised to see the images of gun-totting and a barefaced crowd of people protesting in front of many State Capitols demanding an end to stay-at-home orders. They are demanding either freedom or Covid-19 (read death). America is turning out to be the most distorted and depraved democracy under a new nationalistic fervor. This new normal in America scares me despite being a staunch believer in freedom and democracy.

I try to find solace in books and nature when media reports and articles are rife with reports of division, death, and animosity. In the age of quarantine, the only place that brings me closer to nature is the deck of my house from where I can see fresh cheery blossoms, spring foliages, and a blue horizon. At the small hillock behind my house are some trees where American robins and bluebirds sing tirelessly.

One day, I noticed a bluebird fly away from under our deck. The same thing happened the other day. I went down and saw a nest in a safe corner with a deck wood canopy by the wall. The nest had two eggs. Then I stopped frequenting my deck for fear of delaying the hatching of the eggs. I also alerted my wife and son to minimize deck appearances and reduce time there.

A couple of days ago, I watched the bluebirds’ pair taking turns flying from and to the nest. It was apparent they had started feeding their hatchlings. When we go out to the deck now, they alight on a small tree with insects in their beaks. When we come inside, they fly to the nest and feed their new-born. I know their hatchlings will grow quickly to be fledglings and will fly away even before our quarantine ends and the stay-at-home order gets lifted.

Anyway, the bluebirds have given us a reason to rejoice with their hatchlings at our backyard. I wish to see their fledglings flying into the beautiful sky where death does not hover over them as it does to us. A new door opens when an old door is closed. A dismal quarantine period has opened a window to the life cycle of two new bluebirds.

Home is what matters

The country is in a state of total lockdown to prevent potential community transmission of Coronavirus disease 2019 (COVID-19). Along... Read More...

Over 1,000 laborers stranded at border

DHANGADI / BAITADI, April 2: As thousands of people have come home from India in recent days without their health... Read More...