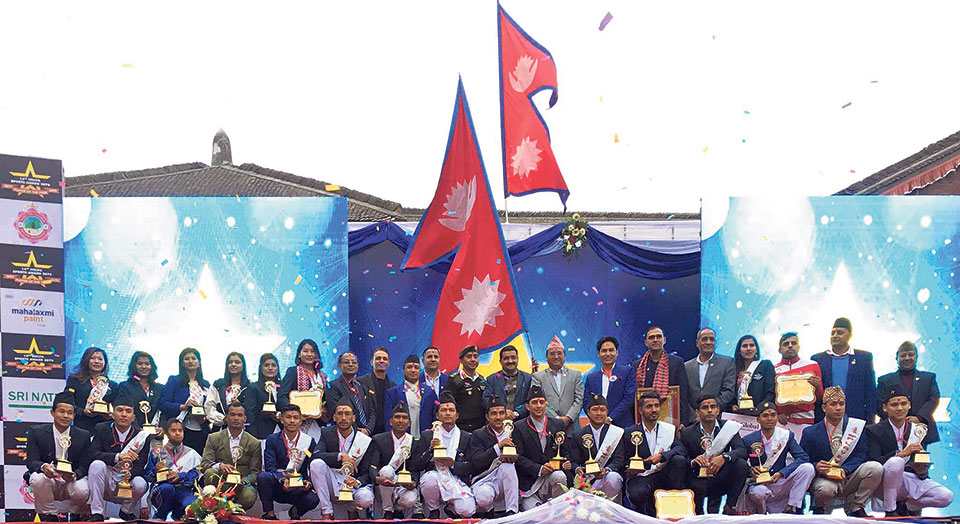 KATHMANDU, Feb 19: Paragliding’s Bimal Adhikari and taekwondo’s Nima Gurung have won the player of the year awards at the Nepal National and International Players’ Association (NNIPA) Sports Award in Kathmandu on Tuesday.

In the 14th edition of the association’s award ceremony, Adhikari won the award in the men’s category, while Gurung bagged in the women’s category. They both were rewarded with a cash prize of Rs 100,000 each.

Likewise, the rising youth award was given to volleyball’s Saraswati Chaudhary in women’s category and athletics’ Ajit Kumar Yadav in the men’s category. They both got Rs 50,000 each.

NNIPA awarded the prizes to the players of 28 different sports on the basis of their performances in the 18th Asian Games held in Jakarta, Indonesia in 2018. Also, the association awarded former boxing coach Madan Gurung with the Gajraj Joshi Aadarsh Sports Personality Award. He received Rs 35,000, while singer Yogeshwor Amatya announced to give him Rs 35,000 more.

The association also awarded the other players of 28 different categories on the basis of their performances in 2019. They all got Rs 10,000 each. Mahima Koirala won the award for the para-athlete of the year.

Likewise, it felicitated the Kathmandu Post’s Prajwal Oli, who is also the general secretary of the Nepal Sports Journalist Forum (NSJF) and Gorkhapatra’s Rajendra Chitrakar and gave Rs 25,000 each.

Residents of Nabhi, Gunji and Kuti used to pay land revenue to Nepal until 2035 BS
20 hours ago

Unlocking the lockdown
20 hours ago