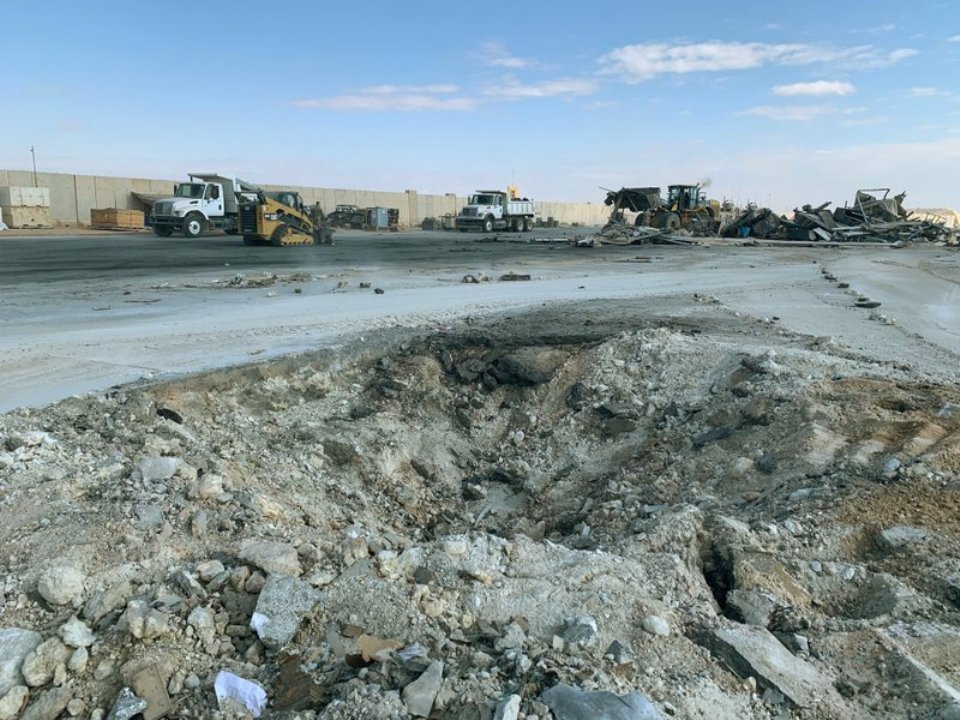 FILE - In this Jan. 13, 2020 file photo, Iranian bombing caused a crater at Ain al-Asad air base in Anbar, Iraq. Ain al-Asad air base was struck by a barrage of Iranian missiles, in retaliation for the U.S. drone strike that killed atop Iranian commander, Gen. Qassem Soleimani. The Pentagon now says 50 service members have been diagnosed with traumatic brain injury caused by the Jan. 8 Iranian missile attack on an air base in Iraq where U.S. and coalition troops had taken cover in advance. (AP Photo/Ali Abdul Hassan)

WASHINGTON, Jan 30: The spotlight on brain injuries suffered by American troops in Iraq this month is an example of America’s episodic attention to this invisible war wound, which has affected hundreds of thousands over the past two decades but is not yet fully understood.

Unlike physical wounds, such as burns or the loss of limbs, traumatic brain injuries aren’t obvious and may take time to diagnose. The full impact may not be evident for some time, as studies have shown links between TBI and mental health problems. They cannot be dismissed as mere “headaches” — the word used by President Donald Trump as he said the injuries suffered by the troops in Iraq were not necessarily serious.

“TBI is a serious injury and one that cannot be taken lightly,” said William Schmitz, national commander for the Veterans of Foreign Wars. “TBI is known to cause depression, memory loss, severe headaches, dizziness and fatigue,” sometimes with long-term effects.

The VFW called on Trump to apologize for his “misguided remarks.”

Rep. Bill Pascrell, Jr., a New Jersey Democrat and founder of the Congressional Brain Injury Task Force, faulted Trump for displaying “a clear lack of understanding of the devastating impacts of brain injury.”

The Pentagon says 50 service members have been diagnosed with traumatic brain injury caused by the Jan. 8 Iranian missile attack on an air base in Iraq where U.S. and coalition troops had taken cover in advance. The toll could rise still further. No one was killed in the attack, which was an Iranian effort to avenge the killing of Qassem Soleimani, its most powerful general and leader of its paramilitary Quds Force, in an American drone strike in Baghdad.

Details of the U.S. injuries have not been made public, although the Pentagon said Tuesday that 31 of the 50 who were diagnosed with traumatic brain injury have recovered enough to return to duty. The severity of the other cases has not been disclosed.

The Pentagon did not announce the first confirmed cases until more than a week after the Iranian attack; at that point it said there were 11 cases. The question of American casualties took on added importance at the time of the Iranian strike because the degree of damage was seen as influencing a U.S. decision on whether to counterattack and risk a broader war with Iran. Trump chose not to retaliate, and the Iranians then indicated their strike was sufficient for the time being.

The arc of attention to TBI began in earnest, for the U.S. military, in the early years after it invaded Iraq in 2003 to topple President Saddam Hussein. His demise gave rise to an insurgency that confounded the Americans with crude but devastatingly effective roadside bombs. Survivors often suffered not just grievous physical wounds but also concussions that, along with psychological trauma, became known as the invisible wounds of war.

The injuries have often been dismissed in part because the problem is not fully understood, although the Pentagon began focusing on the problem in the early 1990s when it established a head injury program that grew into today’s Defense and Veteran’s Brain Injury Center. Among its work, the center provides published reviews of research related to TBI, including links between severe TBI and behavioral issues such as alcohol abuse and suicide.

A study published this month by University of Massachusetts Amherst health services researchers concluded that military members who suffered a moderate or severe TBI are more likely than those with other serious injuries to experience mental health disorders.

Concern about TBI has recently given rise to questions about whether military members may suffer long-term health damage even from low-level blasts away from the battlefield, such as during training with artillery guns and shoulder-fired rockets.

“We’re finding that even a mild blast can cause long-term, life-changing health issues,” said Riyi Shi, a professor of neuroscience and biomedical engineering at Purdue University.

A 2018 study by the federally funded RAND Corp. found a dearth of research and understanding of potential damage to the nervous system from repeated exposure to these lower-level blasts. That same year, the Center for a New American Security, a Washington think tank, released a study urging the Pentagon to conduct a blast surveillance program to monitor, record, and maintain data on blast pressure exposure for “any soldier, in training or combat, who is likely to be in a position where he or she may be exposed to blasts.” It said this should include brain imaging of soldiers who have been exposed to blasts as part of the study to better understand how blasts affect the brain.

Shuttle service brought into operation at TIA
19 hours ago

972,000 doses of Covishield vaccine arriving in Nepal today
19 hours ago