DHADING, Jan 22: Seven people were killed and 11 others sustained injuries when a truck heading toward Dhadingbesi from Dhola Mandali Temple in Dhading district met with an accident at Nilkantha Municipality -8 on Tuesday.

According to DSP Rabindra Regmi, the truck with registration number Ga 1 Kha – 8012 lost control and overturned due to high speed. Police said the truck was also overloaded.

"Eyewitnesses said that the truck was in a very high speed and passengers more than its capacity were squeezed in the cabin," said DSP Regmi.

Suresh Gurung, who sustained minor injuries, said that the driver was drunk. And the vehicle was 'in full speed'. 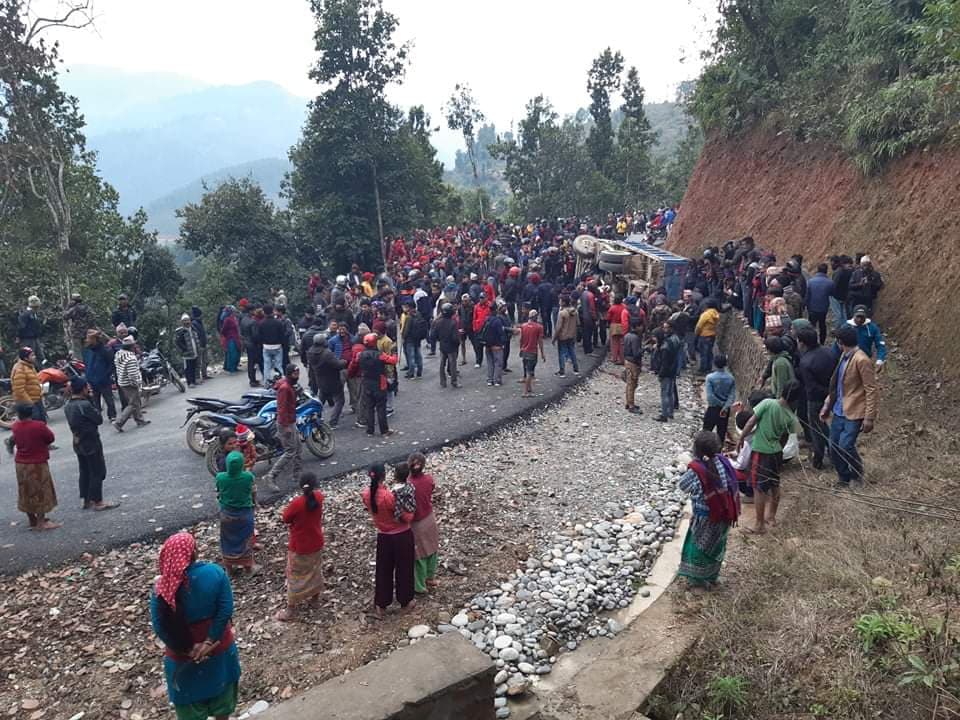 "People go to Dhola Mandali every Tuesday to offer prayers and promises are made to sacrifice goats. People often get drunk in this gathering. The driver was also drunk. Even some passengers were drunk," he said.

The driver has received severe injuries and has been sent to Kathmandu for treatment along with 14 others.

"The injured have been sent off to Kathmandu for treatment. An army helicopter was used to airlift the victims. Four of the injured were sent in an ambulance," said Bikram Bishwokarma, information officer at the District Hospital, Dhanding.

Police suspect 44 passengers were in the truck at the time of the accident.

Man from Dhading tested positive for COVID-19 during RTD

DHADING, April 14: A man from Dhading tested positive for coronavirus during the Rapid Diagnostic Test (RTD), on Tuesday. ... Read More...

DHADING, Oct 15:  Seshkanta Foundation has established a technical and vocational school in Dhadhing in cooperation with a German NGO. Read More...