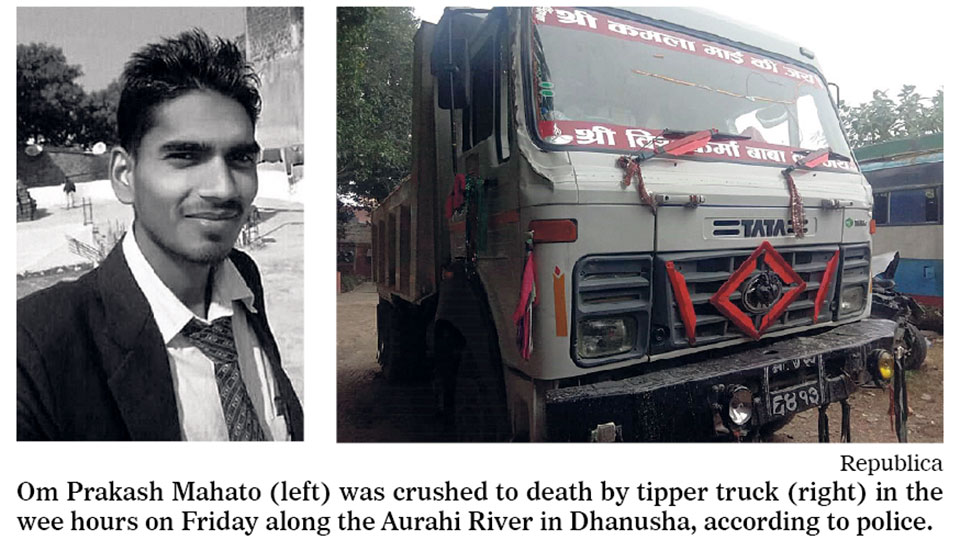 DHANUSHA, Jan 11: A 24-year-old youth who has spearheaded protests against the illegal extraction of aggregates and sand from a local river, was murdered by the ‘crusher mafia’ on Friday morning.

Om Prakash Mahato aka Dilip was crushed by a tipper truck along the Aaurahi River in Mithila Municipality-5, Dhanusha early Friday morning, according to police. Dilip had been protesting against the illegal extraction of aggregates from the river.

The Aaurahi is surrounded by farmland, some of it belonging to Dilip. The crusher industry operating in the area has been extracting aggregates from the river in the evenings with the help of heavy machinery. This has jeopardized the farmland.

“The crusher operators crushed my brother to death for raising his voice against the illegal extraction of aggregates from the Aaurahi,” said Birendra Kumar Mahato, elder brother of the deceased.

According to Area Police Office, Dhalkebar, the truck that killed Dilip has been identified as Na 7 Kha 6413. The driver is under police control, said Inspector Ram Kumar Yadav.

Yadav further said that the police will take the truck owner and the crusher operator also into custody for investigations.

Dilip’s sister Laxmi Mahato claimed that he was killed by crusher operator Bipin Mahato. “My brother was beaten to death. He was then crushed by the tipper truck wheels,” she said. Bipin had earlier warned her father that he would kill Dilip if he did not stop opposing the crusher industry.

Dilip, who was pursuing an engineering degree in India, had come home during vacation. He used to discuss local politics and social problems with youths in the village.

He was against the illegal extraction of aggregates and sand. He and other local youths even spearheaded a campaign to stop the illegal activity.

Last year too, Dilip had obstructed the extractions, according to his friend Ram Pukar Sah. He had called in local journalists and the police. The latter had then taken the tipper trucks and loaders under their control and released them a day later.

“The crusher operators had tried to win Dilip over with the offer of a motorcycle costing Rs 500,000. But he ignored them. It was murder and they are trying to make it look like an accident,” said Sah.

At 4 am on Friday, Dilip, Roshan Yadav and Shyam Yadav, chair of ward 5, went for a morning walk toward the riverside. Suddenly, Shyam received a call and he went away leaving Dilip and Roshan behind.

Roshan was feeling unwell and walking slowly while Dilip walked faster and was way ahead. When Roshan reached near the river, Dilip had already been crushed to death.

“After Roshan informed me about this, I reached the scene. Dilip’s body was on the tipper track,” Shyam told Republica.

Bechan Sharma has been extracting aggregates from the river for Bipin Mahato. “Locals and the police have been reluctant to intervene, Shyam further said.

Mayor of Mithila Municipality Hari Narayan Mahato said the municipality has not granted permission to extract aggregates from the Aaurahi River. He said he does not have any idea about the illegal extractions.

Locals in Dhanusha burnt tires to block the East-West Highway on Friday to protest the killing of Om Prakash Yadav. Photo: Mithilesh Yadav/Republica

UDAYAPUR, June 13: Police have impounded around half a dozen excavators and tractor-tillers which were used in illegal extraction of... Read More...

Ministry of Industry drafts criteria for excavating sand and aggregates

KATHMANDU, Aug 10: The Ministry of Industry (MoI) has prepared a draft to set criteria for excavating sand and aggregates... Read More...

Govt awards construction contract of flyover in Gwarko, Lalitpur
10 hours ago
Residents can install EVs charging units for their personal use: NEA
21 hours ago

Lalitpur DAO suspends all but essential services
23 hours ago

Users of broadband internet on the rise in Nepal
23 hours ago
99 Nepali workers set out for Israel; labor minister, ambassador reach TIA to see them off
6 hours ago

Govt did not coordinate with local units to prevent the third wave of COVID-19: KMC Mayor Shakya
7 minutes ago

Cut off by volcano, Tongans relieved as contact restored
12 minutes ago