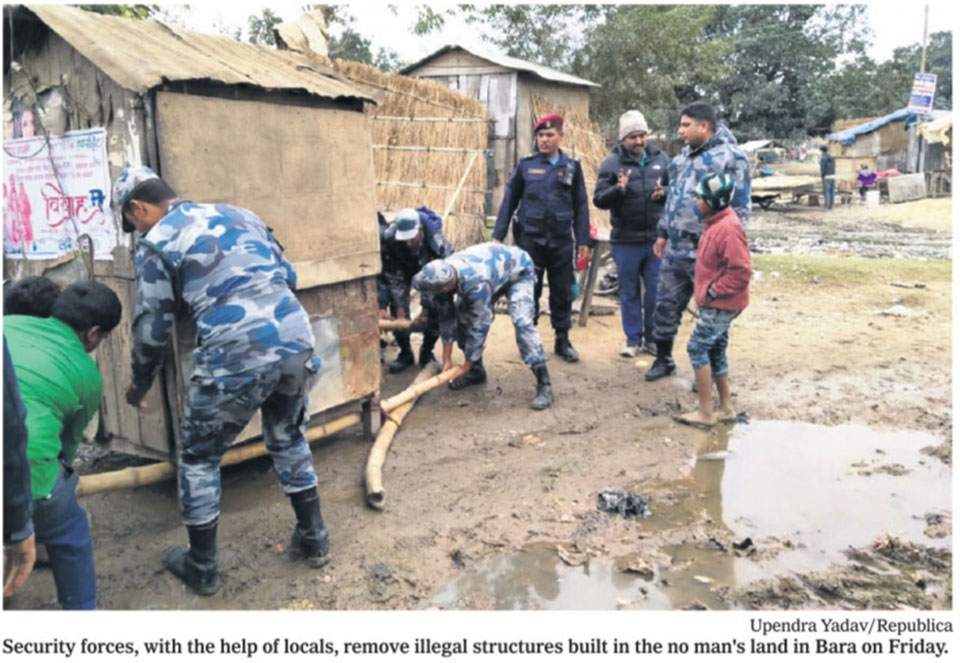 BARA, Jan 4: The people's representatives of Matiarba in Bara district with the support of security forces have dismantled huts and other structures built illegally by the locals in the no-man's-land.

According to Inspector Laxuman Joshi, chief of the border outpost of Armed Police Force in Matiarba, the land encroached upon by the Nepali side in Kalaiya Sub-Metropolitan City-10 has been cleared with the help of Armed Police Force, Nepal Police and ward chairman Sankhar Sah Gupta.

Likewise, the encroached land at Lalachapara toward the Indian side has been removed by the team of Indian Sashastra Seema Bal led by commander Anil Singh, informed Joshi.

Joshi further added that almost a dozen houses were removed from the Nepali side. The locals had run retail store and other businesses by encroaching upon the no-man's-land, Joshi added.

The locals have encroached upon almost a kilometer of no-man's land, of which police, on Friday, removed infrastructures built along almost 300 meters stretch. “The security personnel will remove the remaining encroached land,” Joshi added.

Lalitpur DAO suspends all but essential services
8 hours ago
Residents can install EVs charging units for their personal use: NEA
7 hours ago