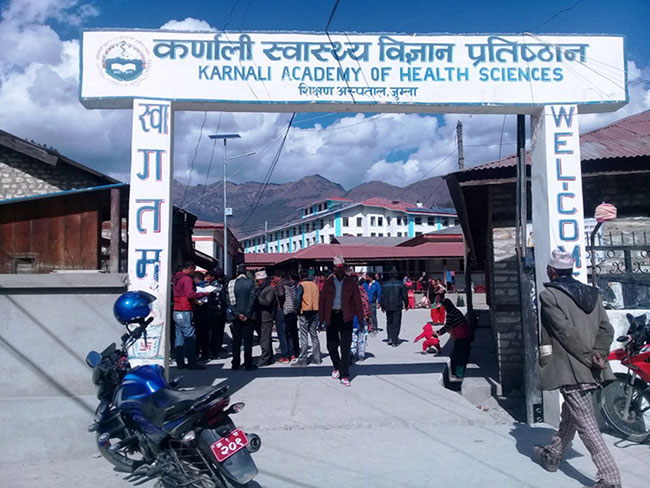 JUMLA, Dec 21: Karnali Academy of Health Sciences (KAHS) has recommended three names to the government for the post of rector, which remains vacant for the last seven months.

According to Vice-chancellor Wagle, the recommendations will be beneficial for the institution. “The names have been recommended to the Minister for Health and Population as per Sub-Section 1 of Section 21 of the KAHS Act, 2011,” he said, adding that the rector will be appointed in a few days. The academic sessions at KAHS will run smoothly following the appointment of the rector.

According to Bishwa Raj Kafle, registrar at KAHS, Prof Dr Thapa has gained the trust of the people in the region by delivering quality health services. He adds that there is a big chance of Prof Dr Thapa for being appointed the rector of KAHS. “Prof Dr Thapa is a hard working and dedicated candidate. Appointing someone who has already worked at KAHS will be beneficial for the institution and society,” he added.

Likewise, Lal Bahadur Sarki, a member of KAHS Senate, said that the decision of the institution to recommend Prof Dr Thapa for the post of rector is praiseworthy as he has worked for the betterment of the people of Karnali.

Likewise, Mahendra Bahadur Shahi, chief minister of Karnali Province, said that Prof Dr Thapa is someone who wants the betterment of the people in Karnali.

Prof Dr Thapa, 40, a resident of Sainamaina Municipality-6, Rupandehi, is an associate professor at KAHS. He earned his PhD in gynecology and oncology from Wuhan University in China in 2019.

Prof Dr Thapa is working at the KAHS since Fiscal Year 2014/2015. In the absence of rector, the deans of KAHS have been handling the responsibilities of rector.